27 April 2011: An extraordinary environment for tornadoes. 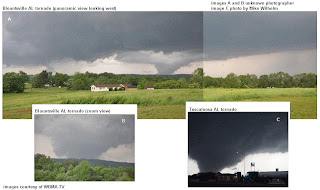 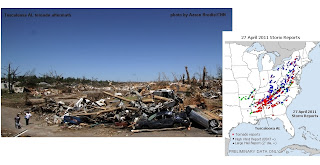 Last Wednesday's tragic and historic tornado outbreak (see photos above, and my prior blog post) was unprecedented in the past 75 years of U.S. history, topping even the 1974 "Super Outbreak." The number of deaths are now close to 340 people. It will take a while to sort out the actual number of tornadoes, with NWS surveys ongoing. At least one tornado has been rated EF5 so far (Sunday a.m. 5/1/11).

Why were the tornadoes so strong, so numerous, and on the ground so long? Comparing the 27 April 2011 storm environment to years of tornado database parameters that I've kept, the setting for Wednesday's tornadoes was rare and quite extraordinary.

The scatterdiagram (3rd graphic above) is from research I did with Bob Johns in the early 1990s (Bob is now retired from SPC). We looked at observed soundings associated with 242 F2-F5 tornadoes from the 1980s, and found combinations of storm-relative helicity (SRH, a new parameter at the time that quantitized low-level shear, developed by Robert Davies-Jones at NSSL) and CAPE to be useful in assessing environments with potential for significant tornadoes. Using that data, and with the help of John Hart at SPC, we came up with a parameter called the Energy-Helicity Index (EHI) using the diagram above. EHI is still widely used in tornado forecasting today to assess areas and combinations of SRH and CAPE that can support low-level mesocyclones and, hence, supercell tornadoes.

The Tuscaloosa environment location (large red dot) on the scatterdiagram is quite remarkable! It falls in the center and slightly toward the upper right in the area of most optimum SRH/CAPE combinations for tornadoes. Most telling, there are no points on the diagram to the upper right of the Tuscaloosa point, which makes it rather unique. I've looked through my own databases of tornado cases over the past decade, and can't find any tornado environment that even approaches this one (roughly 600 m2/s2 0-1 km SRH _and_ 3000 J/kg MLCAPE). Typically, if SRH is greater than 500, CAPE is less than 2000 (still a very good environment for tornadoes), or, if CAPE is greater than 3000, SRH is only around 200-300 (yet another very good environment for tornadoes). To have both the SRH and CAPE so large, during daytime heating no less (SRH values are usually largest at night with the low-level jet, when CAPE is not so strong), is quite rare and unusual.

Given this information, and the fact that mid-level/500 mb winds were approaching 100 kts on Wedensday (excellent deep-layer shear in addition to low-level wind shear), it is no wonder that tornadoes were strong to violent and on the ground so long. The environment conditions where the storms formed and propagated were probably as optimum as we will ever see!

The final graphic above shows 500 mb maps and 0-1 km EHI conditions approximated/forecast from the RUC model for Monday 4/25/11 (a notable tornado day in TX and AR) and Wednesday 4/27/11 (the historic outbreak). Notice how the midlevel trough stayed in place over the southern U.S. over several days (there were tornado episodes in the South from Sunday 4/24 through 4/27), with the strongest winds peaking on Wednesday (> 100 kts) in association with a strong negative tilt shortwave moving through the trough. Notice, too, from the EHI panels, how much SRH and CAPE were present already on 4/25, setting the stage for the peak combinations on 4/27 with the strong short wave and wind max moving through. The forecast EHI values on Wednesday p.m. 4/27/11 were very large over the MS/AL area, signaling the outbreak to come, though no one could know how historically deadly it would be.

Even with the huge death toll, it must be said again that the National Weather Service and local media did a superior job on Wednesday with outlooks, alerts, and warnings. My heart truly goes out to those who have had their lives destroyed by these tornadoes. I hope anyone reading this will at least consider making a donation to help. See: www.cnn.com/impact.

I followed the event intently from Day 7 to the event. Once it became very obvious something extreme was going to happen, I was amazed at how well SPC, NWS, local media, and the Emergency Management teams were able to work together to get the word out and prepare. Countless lives were saved as a result.

The PV maps from that day still are mind boggling to this day. Watching that event unfold was tragic.

Both the 1974 and recent outbreaks were bad. My heart goes out to everyone in the latest outbreak. I think there are some differences. In the 1974 outbreak there were six F5 and three or four F4 tornados. In the most recent outbreak I believe there were only two F5 and two F4 tornados and covered six states. The 1974 outbreak covered 13 states and Canada. I think we got lucky in 1974. The death toll could have been much higher if the nine or ten F5 and F4 tornados would have hit more populated areas like happened recently in Alabama. Fortunately they did not. I was eighteen years old and 10 miles away from Xenia Ohio when that terrible tornado hit in 1974.

May god bless everyone that has suffered loss in this most recent outbreak.

However, instability has been much weaker than in Tuscaloosa.

The death toll could have been much higher if the nine or ten F5 and F4 tornados would have hit more populated areas like happened recently in Alabama.

And if the Birmingham tornado had been only a couple of miles south of it's track, it would have been in the heart of Birmingham. If the Phil Campbell tornado had been a couple of miles southeast of it's track, it would have gone through the heavily populated Huntsville/Madison area. The vicious Rainsville EF5 veered right to avoid going into heavily populated Chattanooga. The high end EF4 Jackson County tornado stayed just west of Chattanooga. Death toll could have topped 2,000.