First strong tornado of 2021 kills 1 and injures 30 near Birmingham, Alabama on January 25th

It's been awhile since I've done a write up about a weather event.  Frankly, there has been so much going on in our nation that it's been very hard to focus on weather.

The first tornado death of 2021 occurred this week on Monday, January 25 in Alabama (AL) where an EF3 tornado struck Fultondale, a northern suburb of Birmingham, around 10:43 pm CST (0443 UTC 1/26/21).  There were also 30 injuries.  The first image from video below shows one of the huge power flashes in northern Birmingham as the tornado moved through, and the second image shows some of the damage: 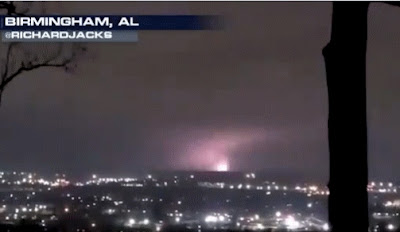 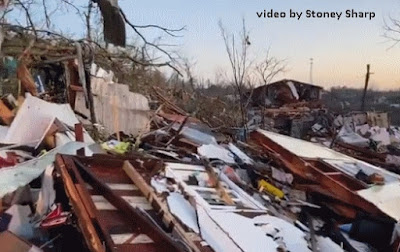 Here's a quick look at the meteorological setting:

It took a long time for the cell that produced the Fultondale tornado to get its act together.  As you can see on the radar images below, the storm originated in Louisiana at mid-afternoon on the 25th, taking roughly 7 hours to get around to producing the deadly tornado in AL that evening:

It is noteworthy that, apart from the death and injuries near Birmingham AL, the same supercell also  killed one person and injured two others from strong non-tornadic winds in central Mississippi (MS) around 6:40 pm CST (0040 UTC 1/26/21 - see middle panel above).  It's easy to forget that, in addition to tornadoes, strong thunderstorm winds can kill people, too.

Also worth noting is the thermal boundary from central MS into central AL (red-blue dashed line in middle panel above) that was in place due to storms that had already tracked east-northeast across this area (this boundary was also evident on surface maps, not shown).  Plenty of research over the years indicates that tornadoes like such boundaries because of the focus of convergence and the energy from contrasting temperatures and wind shear that can help supercell storms spin up tornadoes.  This particular boundary may have helped intensify the deadly supercell that eventually produced the tornado near Birmingham.

The NAM model forecast from the morning of 1/25/21 suggested that tornadoes might be possible during the evening.  Below, the 300 mb forecast for mid-evening (300 mb is the best level in this case for showing the jet stream pattern and branches; see thick white lines and arrows) depicts the spreading wind pattern and associated broad lift across the southeastern U.S.  Also shown (inset) are combined instability and low-level wind shear via the 0-1 km energy-helicity index (EHI), indicating a potentially favorable area for tornadoes with storms just north of the southern jet stream branch across MS and AL: 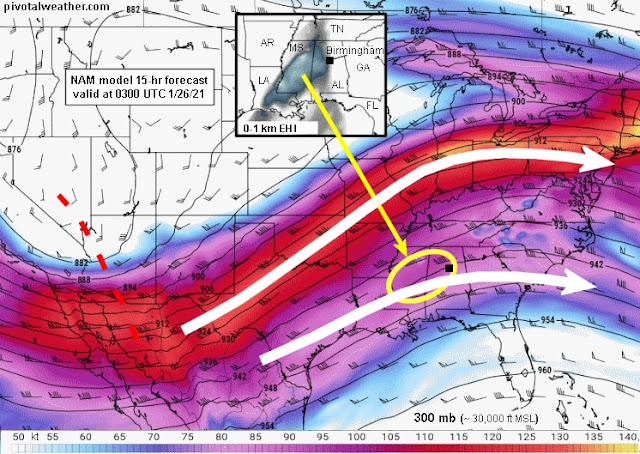 The EHI values above from southwest MS to central AL at mid-evening suggests that the supercell  moving across MS into AL during the evening (see earlier radar images) had a long residence time moving through a potentially favorable environment for tornadoes.  This being the cool season, the supercell may have needed this broad warm sector environment to eventually produce the tornado near Birmingham.  And, as noted earlier, the storm was moving along and parallel to a thermal boundary.

A closer look at the environment using SPC mesoanalysis graphics (below) suggests that the environment along the boundary as the evening progressed was more favorable for tornadoes over AL.  The 0-1 km storm-relative helicity (SRH, a measure of low-level wind shear that can help with generating tornadoes) was larger over Alabama (middle panel).  Some low-level mixed-layer instability (0-3 km mlCAPE, 3rd panel) was also co-located with the increased SRH over central AL, suggesting potential for low-level storm updraft stretching with the supercell moving into the Birmingham area:

Finally, here is a 1-hr HRRR model forecast sounding for 0400 UTC (10:00 pm CST) at Birmingham, roughly 40 minutes before the tornado (important parameters are highlighted in yellow): 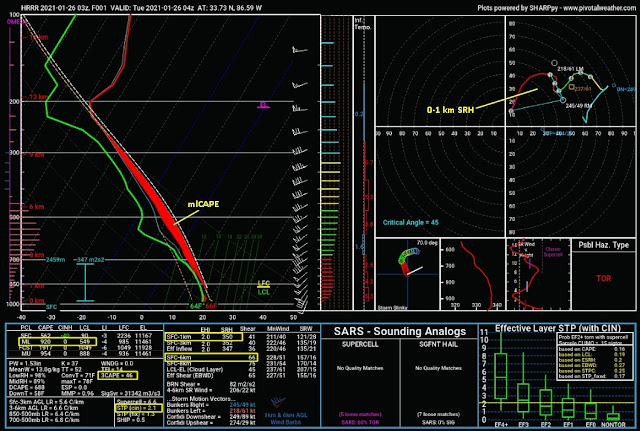 The total mlCAPE was only 900 J/kg, but 0-1 km SRH was 350 m2/s2 (quite significant), and some low-level CAPE was also present (40-50 J/kg, not large but adequate).  Deep-layer shear (surface to 6 km above ground) was also quite large (> 65 kt).  As is typical in cool season cases with not a lot of CAPE but large wind shear, this environment was supportive of tornadoes, particularly with the aforementioned boundary, the broad warm sector through which the supercell was able to travel and organize during the evening, and the increased SRH over AL.

The Storm Prediction Center (SPC) did a great job issuing a tornado watch shortly before 6:00 pm CST that included western, central and northern AL.  Local NWS and TV coverage in the Birmingham area was also on top of the situation during the 10:00-11:00 pm hour, which probably saved lives.

Let's hope, on top of everything else going on in our country right now, that 2021 is not a year with many tornadoes hitting populated areas.  Over the past year, we've been through a lot (ongoing Covid-19, a national election, attempts to deny and overthrow documented election results, a violent assault on our Capitol).  And specific to weather, going back to 2019, there was "SharpieGate" and the attempt to deny and alter facts about the path of Hurricane Dorian.

Hopefully, with new leadership emphasizing science and facts, we'll get this deadly coronavirus under control in the coming months, and life ahead will begin to look better again.