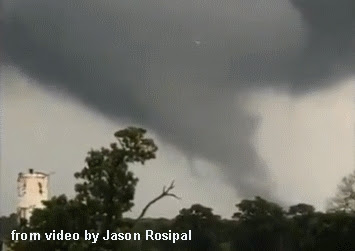 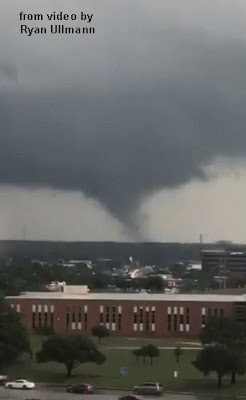 Yet another tornado episode occurred in the South on Wednesday, April 24 and Thursday, April 25 in Texas (TX) and Louisiana (LA), adding 2 deaths to 2019's tornado toll during the early morning hours of April 25 .

The tornado pictured above near College Station, TX at mid-afternoon on Wednesday didn't kill anyone, but was rated EF2 and was widely photographed.  This tornado is interesting because it formed rapidly from a small cell that was not very impressive on radar (see images below).  As a result of being small and relatively distant from radar sites, there was no tornado warning at the time. 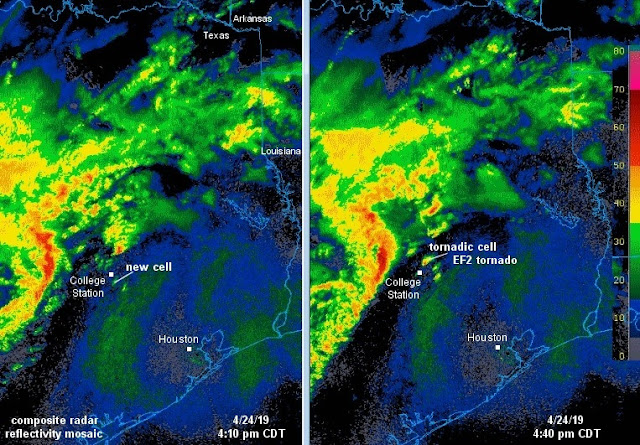 Here's the setting at 4:00 pm CDT... A surface low was just west of College Station (CLL), with a stationary east-west outflow boundary (from earlier storms to the north) also located near CLL.  The circled "S" shows the location of the small supercell that produced the tornado as it crossed this boundary going from south to north: 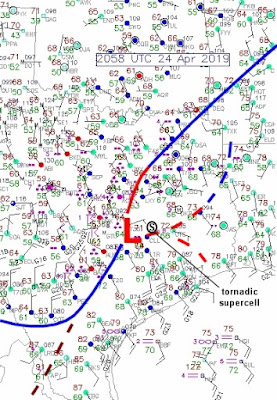 Why did the storm produce a tornado so quickly?  It probably had something to do with the boundary; remember from other posts I've made this year that tornadoes definitely seem to favor boundaries.  This is suggested by the SPC mesoanalysis images below at 4:00 pm CDT: 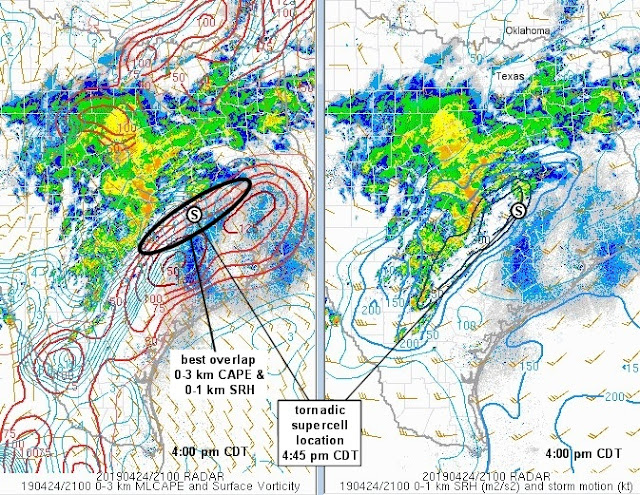 Notice in the 2nd graphic above (SRH, or storm-relative helicity) how there was a band of enhanced low-level wind shear along and north of the outflow boundary, likely promoting low-level storm rotation in that area.  This same area overlapped low-level CAPE (surface-based instability that can promote rapid vertical stretching) along and south of the boundary, likely making a very favorable environment for a tornado as the cell crossed the boundary in a narrow corridor before it encountered cooler air farther north.

There's not room to show it here, but the RAP model 1-hour forecast sounding at 4:00 pm for CLL had 1200-1300 J/kg of total MLCAPE, over 300 m2/s2 of 0-1 km SRH (a nicely curved low-level wind profile), and over 100 J/kg of 0-3 km MLCAPE in low-levels.  Along with over 60 kt of deep-layer wind shear, and lifting condensation level heights (LCLs, or estimated cloud bases) well below 1000 m to reduce cool outflow, this was a very favorable environment for supporting tornadoes along and just north of the outflow boundary.  Farther north of the boundary, storms became increasingly "elevated" (less surface-based regarding the instability feeding them), which would be less supportive of tornadoes.

Later that evening and night, a long-lived supercell producing multiple tornadoes emerged from the southern segment of a line of storms over far eastern TX and moved to north-central LA (see radar images below), eventually killing 2 people at Ruston, LA just before 2:00 am CDT on April 25.

The EF3 damage from this tornado at Ruston included this motel (photo below), which lost most of it's 2nd floor.  Although no one died at this location, this is a pointed reminder that shelter below ground (or at least in a small interior 1st floor room) is crucial in surviving tornadoes! 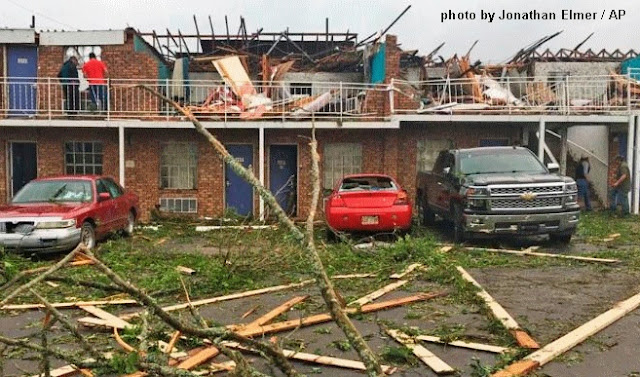 The surface map at 1:00 am CDT early morning on April 25 showed an outflow boundary that was now oriented north-northeast to south-southwest over east TX to northwest LA, with the long-lived supercell (circled "S") moving northeastward roughly along this boundary for 2-1/2 hours: 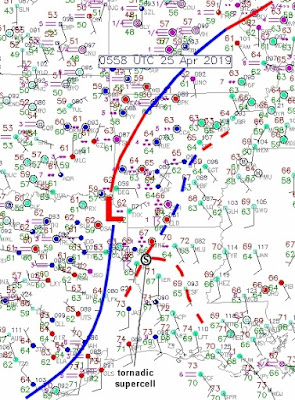 A subtle and weak warm front progressing northward over central and northern LA (thick red dashed line on surface map above), suggested by slightly backed surface winds and larger dew points by 3-4 degrees F, may have also helped in sustaining the tornadic storm.

SPC mesoanalysis images at 1:00 am CDT (below) also showed a favorable environment for supporting supercell tornadoes over west and northwest LA along and just ahead of the outflow boundary and subtle warm front: 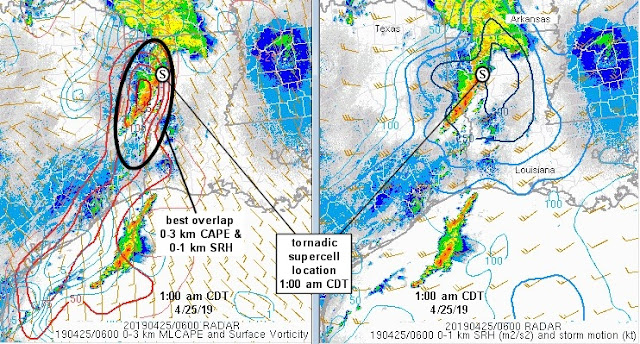 MLCAPE (not shown) was around 1200 J/kg, 0-1 km SRH > 300 m2/s2, and low-level MLCAPE > 100 J/kg over a sizable area through which the supercell was moving.  The orientation of the boundaries apparently allowed the northeastward-moving supercell to take advantage of this supportive environment for tornadoes over a long period of time, while utilizing increased shear and convergence along/near the same boundaries.

Here's a quick look at the larger scale upper air pattern via a 500 mb forecast map from the NAM model, valid at 1:00 am CDT: 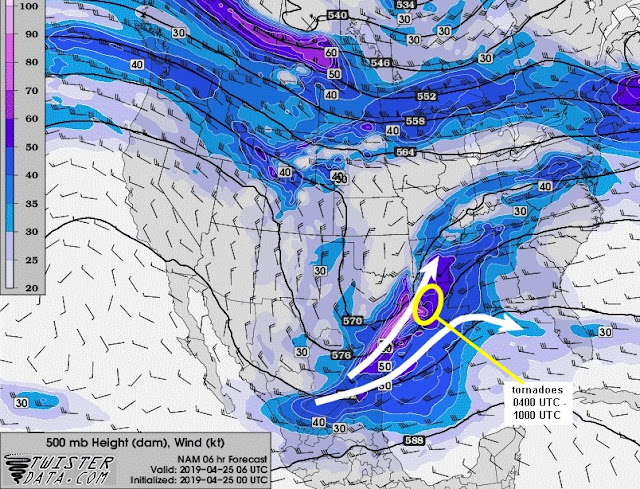 A large, intense midlevel trough was moving from TX eastward, forcing ascent over LA with the "spreading jet" pattern ahead of it inducing general upward motion and strong wind dynamics across the area where tornadoes occurred overnight.

Tragically, the tornado outbreaks in the southern U.S. on Feb 23, March 3, April 13, and now April 25 have claimed a total of 29 lives so far in 2019.  Other deaths have resulted from thunderstorm winds blowing trees down on houses and vehicles, and flash-flooding.

As severe weather season continues in 2019, know how to stay safe... watch Surviving the Storm: What Chasers Want You to Know, free on YouTube: 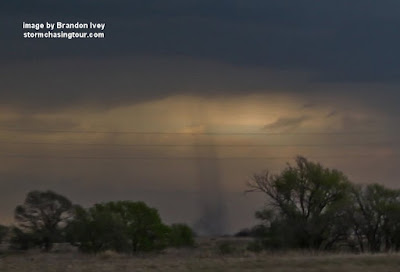 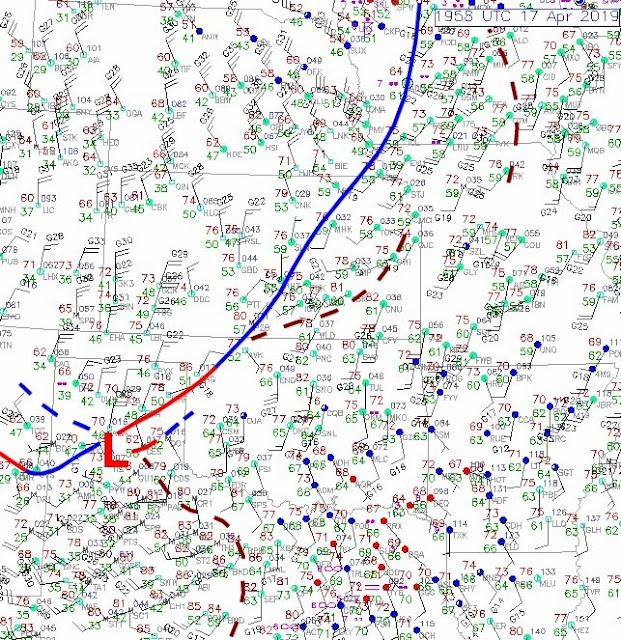 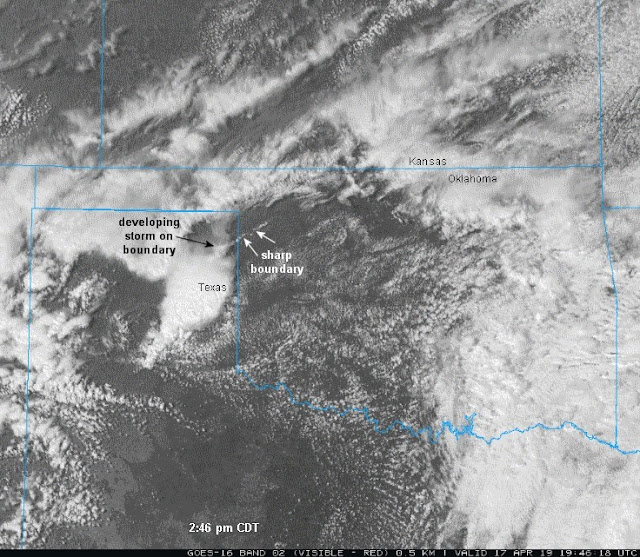 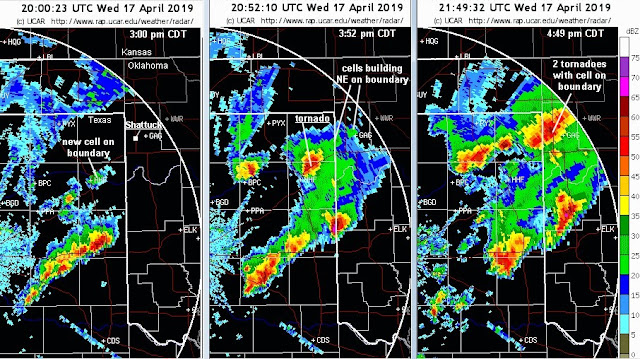 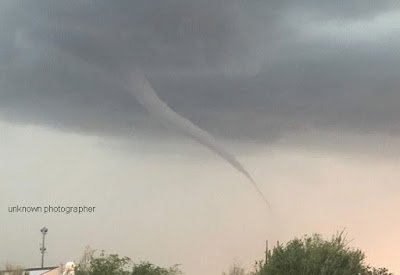 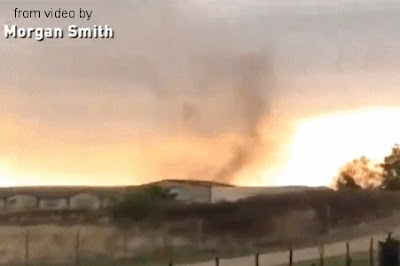 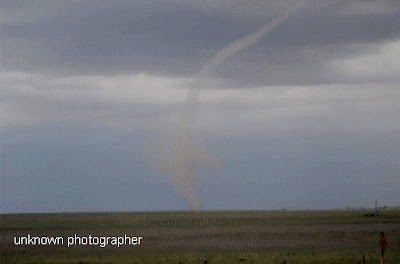 Posted by Jon Davies at 7:06 PM No comments: 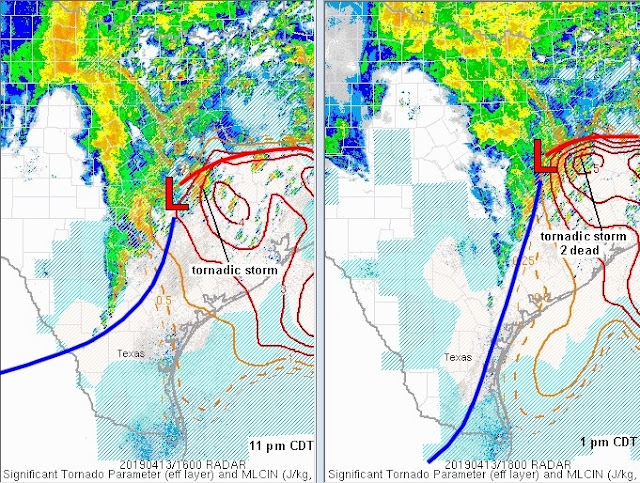 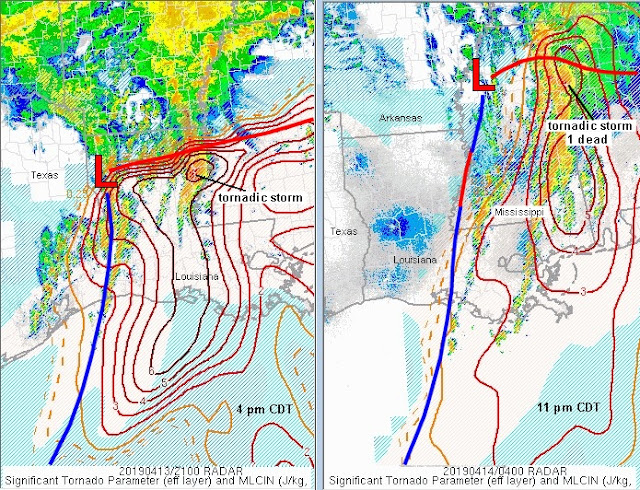 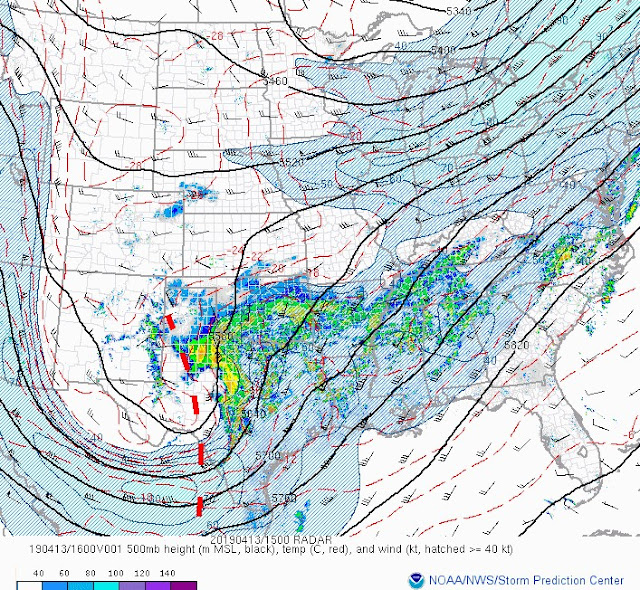 Posted by Jon Davies at 6:42 AM No comments: