Surprise tornado in Minneapolis on Wednesday 8/19/09!

People close to me know that I love studying "surprise" situations that are very difficult as forecasts. Wednesday's tornado near downtown Minneapolis around 2 p.m. (see photos above) was indeed a surprise, as the area was socked in by clouds, and the small cell that produced the tornado was embedded in a larger complex of rain (see 2nd graphic above) where total CAPE appeared small. There were no watches or warnings prior to the tornado. At first glance, it appears that the small tornadic supercell was an odd random incident. But, though difficult if not impossible to forecast, a closer look reveals some clues that point to why the tornado occurred in the area where it did. These might help to heighten short-term situational awareness in future situations of a similar nature.

The 3rd graphic above shows the midday surface map, with a small low and convergence focus visible in the wind flow fields near Minneapolis. The low appeared to be right at the intersection of some subtle wind shift boundaries, organized not unlike the surface pattern in some cold core events, although this setup was not associated directly with a 500 mb cold core low. Instead, a sharp negatively-tilted 500 and 700 mb trough (see SPC mesoanalysis, 4th graphic above) was moving northeast across southern Minnesota, with a comma cloud and vorticity center visible with the wave moving northeast in satellite imagery (see the inset enhanced IR image on the surface map graphic). This vorticity center was trackable from near Omaha after daybreak to the Minneapolis area at early afternoon, with the comma cloud expanding and becoming better defined in the enhanced satellite imagery. The surface low and boundaries over Minnesota were organizing ahead of and in response to this upper feature and forcing, even within the large complex of rain and embedded thunderstorms.

Going back to the radar image (2nd graphic), if one looks closely, there was a pattern to the precipitation echoes, with a flat "S" shape (indicated by heavy white dashed line) formed by the stronger reflectivity returns corresponding to the N-S boundary roughed in on the surface map. The surface low position was likely located near the middle of this "S" (marked by a red "L" in the radar image), and the small tornadic supercell was located immediately east or northeast of this focus where increased shear and convergence would be expected, consistent with the surface analysis (3rd graphic). The SPC mesoanalysis graphics (4th graphic) also suggested increased 0-1 km storm-relative helicity (SRH) pointing into the area from the southeast, with maximized low-level CAPE in the Minneapolis-St. Paul area, even within the large convective complex.

The RUC analysis sounding at MSP (Minneapolis International Airport, southeast of downtown) at about the time of the tornado also suggests that large low-level shear and SRH were present (see hoodograph on last graphic above). The same sounding confirms that large low-level CAPE bunched close to the ground was present in a nearly saturated environment (little or no mixing for near-surface air parcels), even though total CAPE was small (at best, around 400 J/kg). This vertical arrangement of CAPE and SRH co-located in low-levels probably helped to optimize tilting and stretching of horizontal low-level vorticity near the boundaries and surface low focus to generate the tornado.

Thankfully, with the marginal total CAPE, nothing more than a weak tornado (EF-0) could get going, but not without leaving a south to north trail of damage across south Minneapolis to near the downtown. A later tornado east-southeast of Minneapolis near Cottage Grove (not shown) was rated EF-1, and occurred with a cell on the bulging boundary south and southeast of Minneapolis as it "curled" and "wrapped" northeastward during the next 45 minutes in response to the evolving wave and energy passing aloft.

This case suggests that evolving and expanding comma clouds in IR imagery indicative of a strong vorticity center and wave aloft be watched carefully as they move northeastward. Even with rain and only small total CAPE, if there is focused surface congergence (e.g., a mesolow with boundaries) in response to the wave and vorticity aloft, and at least some CAPE (e.g. 300-500 J/kg low in the vertical profile with little or no CIN), look out! A surprise may be in store with that energy focusing into a relatively small area.

Additional information and graphics for this event are on the NWS Minneapolis web site here.

Updated material on 700 mb temperatures and estimating the "cap"

I put together a new case study (10 July 2009) showing how 700 mb temperatures can be helpful in estimating the location of an inhibiting capping inversion:
10 July 2009 "cap" case study in the central plains

There are several caveats given, including the fact that the 700 mb temperature values often don't work well in the High Plains and westward due to surface heating over elevated terrain in the warm season, and also upslope situations. Although only a very rough guide, the table and information with this material can be useful in raising awareness about possible "cap busts" when forecasting. Hope some find these useful. 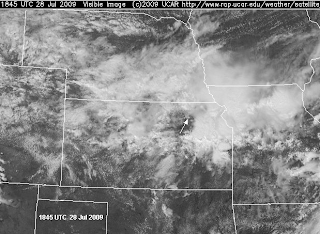