An additional look at the Joplin tornado, after the assessment report 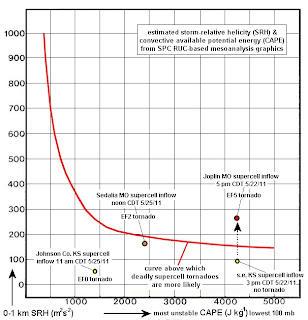 The NWS assessment report for the Joplin tornado came out last week (see here and here), 4 months after this horribly tragic event. I was glad to see that the authors of the report picked up on the public perception of high false alarms, and their tendency to ignore warnings and sirens because of an optimistic bias and the perception that "they happen all the time" in southwest Missouri. I was also glad to see some discussion in the report about the possibility of different tiers of warnings, and even different siren tones or patterns to get people's attention in situations that are truly more deadly. These are some things I touched on (particularly a two-tiered warning system) in a discussion I posted at the very tail end of July.

Given the broad environment area of sizable low-level shear and large CAPE present at late afternoon over southwest Missouri on May 22, when significant storm rotation was detected on radar in that environment, particularly moving toward a populated area like Joplin, that would have been a good situation for the use of enhanced wording or even a "higher tier" of warning. And, even though the tornado developed very fast on the southwest edge of Joplin 17 minutes after a tornado warning with standard wording had been issued, it seems possible that if more urgent action had been performed rapidly around 5:40 pm when the first tornado reports were coming in (e.g., a "tornado emergency" statement or reissuing of the tornado warning with more urgent wording prompting continuous sounding of sirens at that point), some additional lives might have been saved.

With the Joplin report now out, this is a good time and context to go back and look at the Joplin setting using SPC mesoanalysis graphics, which are generally good estimates of parameter patterns and ingredients useful in various types of weather forecasting. The first graphic above shows MLCAPE (mean-layer CAPE) and 0-1 km SRH (storm-relative helicity) graphics at 20 UTC (3 pm CDT) on 5/22/11 after the first storm had developed in southeast Kansas near Parsons (black arrow). Notice that while MLCAPE was quite large (> 4000 J/kg), 0-1 km SRH appeared rather unimpressive at this point (around 100 m2/s2). The 2nd graphic above shows the same paramaters, but 2 hours later at 22 UTC (5 pm CDT) about 30 minutes before the Joplin tornado. Notice that MLCAPE was still very large, but 0-1 km SRH had _increased dramatically_ ahead of the supercell complex approaching Joplin (black arrow), more than _doubling in value_ to greater than 250 m2/s2!

Looking at a SRH/CAPE scatterdiagram (3rd graphic above), notice how this low-level shear increase moved the SRH/CAPE data point from below the red curve upward to _well above_ it. This trend was very important, probably helped by a surface low forming over southeast KS (4th graphic). This should have been noted by any mesoscale analyst working as support to radar/warning meteorologists in the southwest MO/northwest AR/northeast OK area that afternoon. Even though no tornadoes had occurred yet in the s.e. KS/s.w. MO area, such an increase would be a red flag for considering the use of enhanced wording in warnings (or a higher tier of warning, if such a system were implemented) based on any significant rotations detected on radar in such an environment, particularly if a very populated area (such as Joplin) were threatened.

Let's contrast the Joplin setting with a situation that occurred at midday in Kansas City on 5/25/11, 3 days later. The last graphic above shows CAPE (11 pm CDT) and SRH (noon CDT), similar to the earlier graphics, though SBCAPE (surface-based CAPE) is used due to the "cold-core" nature (500 mb closed low nearby) of the setting where SB lifted parcels are typically more representative of true instability. Note that SRH was quite meager (around 50 m2/s2), and CAPE was less than 1500 J/kg in the immediate Kansas City area (left black arrows in last graphic above), with the resulting position on the same SRH/CAPE diagram above far to the lower left _well below_ the red curve. Although it is quite possible to get small short-lived tornadoes in such settings, strong "cold core" tornadoes are almost always linked to settings with much larger SRH. Indeed, there were 2 or 3 reports of brief weak tornadoes from south to north across the KC metro area, but certainly no significant damage. Compared to Joplin, the threat over the Kansas City area was small in this situation. But tornado warnings with wording not much different than the intial Joplin warning 3 days earlier prompted several people in KC to call my wife Shawna and me in panic to ask what was going on, given that Joplin had occurred only a few days earlier. We told people to take cover and precautions, but that the risk was only a small fraction of what it had been for Joplin. This is an example of a situation where 2 tiers of warnings (and possibly different siren modes) might be useful in conveying the relative threat to the public.

Admittedly, the Kansas City situation on 5/25/11 was complicated by the rapid increase in parameter values and support for tornadoes some 70 to 80 miles east-southeast of Kansas City, where a significant EF2 tornado hit Sedalia just after noon. With SRH in the 150-200 m2/s2 range and SBCAPE near 2500 J/kg in the Sedalia area and southeastward (see right black arrows on last graphic above), the SRH/CAPE potential was very close to the red curve on the SRH/CAPE diagram above, signaling a much greater tornado threat there. So the May 25th situation was not a simple one to assess. But use of the tools above were definitely helpful in indicating the increased tornado threat and tornado risk as one moved well east and southeast of Kansas City.

To be clear, I do understand and know that there are many, many tornado warning situations where it is essentially impossible to distinguish between warning and not warning using radar in combination with environment conditions... in those cases the environments are simply too "borderline" to make such calls given the knowledge and observing situations we have. BUT, there are also situations where tornado environment parameters are clearly impressive as thunderstorms form, suggesting increased risk of death and injury over larger areas. Those are the times when we need to do everything we can to convey the true risk to the public.

I do also know that many people still don't seem to know the difference between a watch and a warning (maybe the term "alarm" instead of "warning", avoiding the "waa.." word sound confusion between the two words, would be better?). So I often get arguments that much of our populace is too "dumbed down" to deal with a 2-tier warning system. But is that really a reason to continue status quo in our current system when today's technology and knowledge can offer more information in many warning situations? That is something to think about.