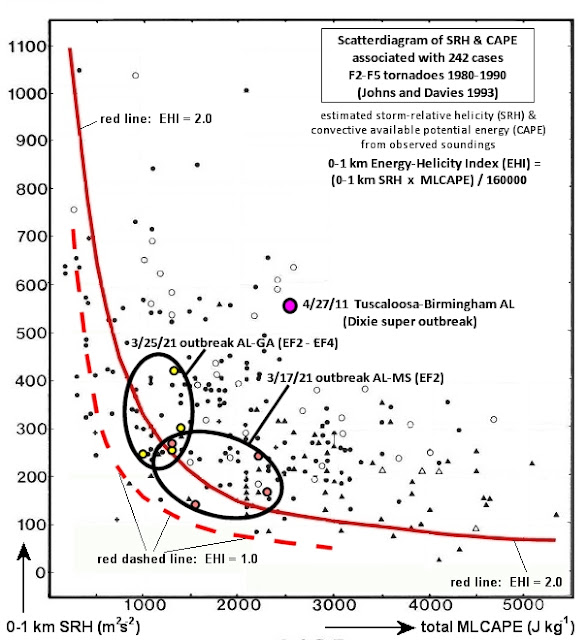 One week ago today, a deadly tornado outbreak in Alabama (AL) and Georgia (GA) caused 6 deaths and a number of injuries, making it the deadliest tornado episode of 2021 so far.

Similar to March 17, 2021 (see toward the end of my post here), the outbreak was well-forecast and well-warned, and as a result many lives were likely saved, even considering the deaths that did occur.  As a result, some people on Twitter have mentioned the famous April 27, 2011 tornado "super outbreak" ten years ago, when over 200 tornadoes occurred on one day in the Dixie states and more than 300 people were killed.

The graphic at the top of this page offers a quick comparison of the tornado environments between that day back in 2011 and the recent outbreaks in AL on March 25 and March 17, 2021 using a scatter-diagram showing storm-relative helicity (SRH, a measure of low-level wind shear) and mixed-layer CAPE (a measure of instability).  Sizable low-level wind shear can generate low-level storm rotation leading to supercell tornadoes, and CAPE (convective available potential energy) helps support and sustain those rotating storm updrafts.

The big pink dot in the middle of the diagram up at the top of this page is representative of the environment on April 27, 2011, showing an unusually large combination of SRH and CAPE leading to the massively deadly tornado outbreak that day nearly ten years ago.   It's pretty clear that 4/27/11 had much larger support for strong and violent tornadoes than either 3/25/21 or 3/17/21.

Getting back to 2021, I've plotted on the same diagram four of the strongest tornadoes from March 25 last week (small yellow-filled dots) and four of the strongest tornadoes from March 17 a couple weeks ago (small red-filled dots), and enclosed those areas on the diagram in black ovals.   Comparing 3/25/21 with 3/17/21, it appears that March 25 had somewhat larger low-level wind shear, one difference between the 3/17/21 setting that supported shorter-tracked EF2 tornadoes, and the 3/25/21 setting where tornadoes were stronger (EF3 and EF4) and longer-tracked.

Another difference between March 25 and March 17 (not shown here) was deep-layer wind shear, where 0-6 km bulk wind difference (BWD) on 3/25/21 in central AL averaged near 70 knots or more, whereas on 3/17/21 the 0-6 km BWD averaged only near 50 knots,  In other words, the general wind fields and resulting wind shear at multiple levels appeared stronger on March 25, 2021, helping to generate stronger and longer-tracked tornadoes like this one near Greensboro AL and west of Centreville AL at mid-afternoon: 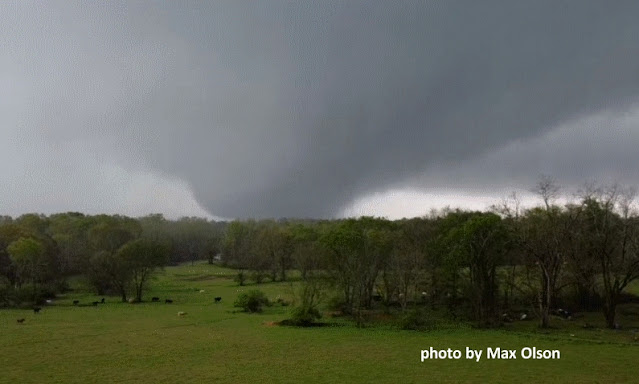 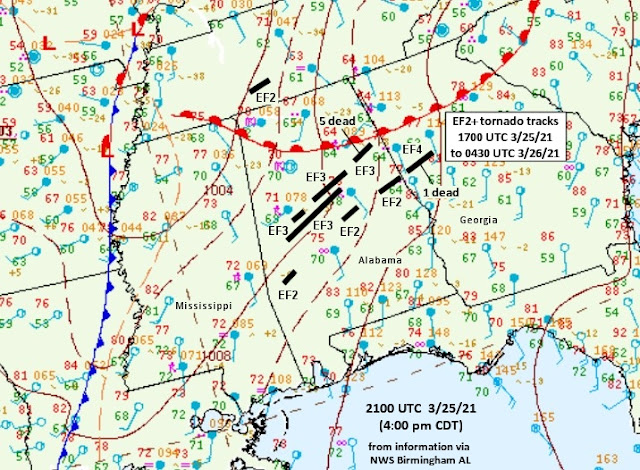 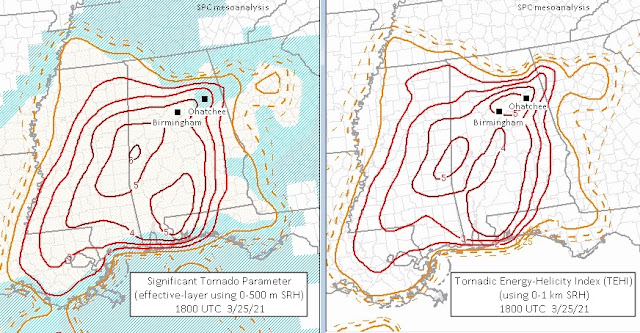 The warm sector over central Alabama south of the warm front was where wind shear and instability parameters were maximized and the long-track afternoon tornadoes occurred.

Here's a composite radar image at 1930 UTC (2:30 pm CDT) just before the town of Ohatchee in east-central/northeast AL was hit by a tornado that killed 5 people. 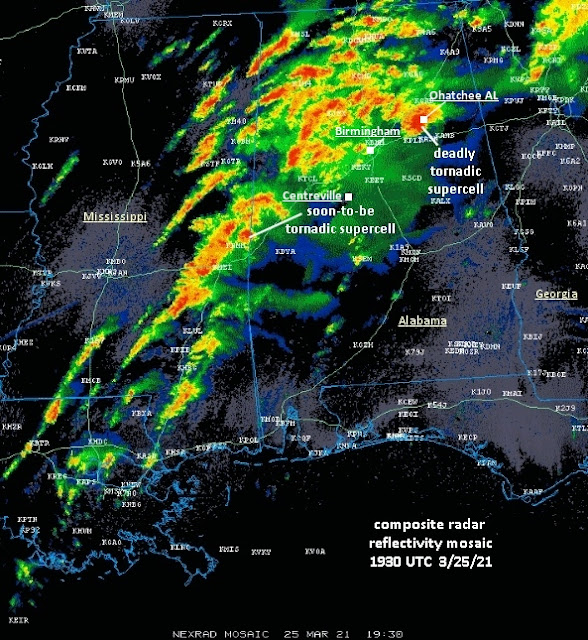 And here's a very interesting photo as that killer tornado approached Ohatchee around 1940 UTC (2:40 pm CDT) -- it appears to show two large vortices, reminiscent of the multi-vortex Elkhart Indiana tornado photographed on Palm Sunday in April of 1965: 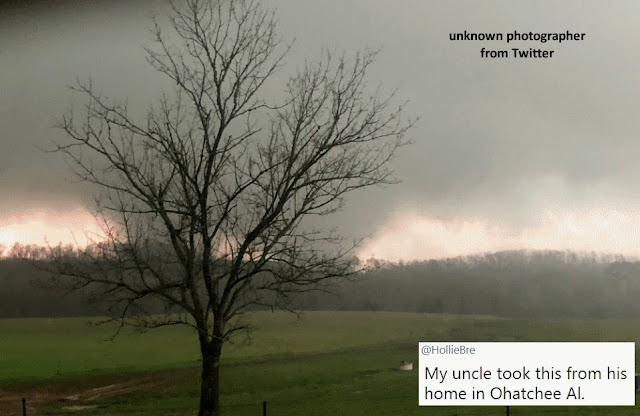 This tornado was from the same supercell that produced a 50-mile track EF3 tornado that struck earlier south of Birmingham with damage and injuries.

And, on the radar image earlier, a new supercell is indicated entering west-central AL that would later generate a strong 80-mile track EF3 tornado starting west of Centreville, AL that at times was more than a mile wide (see the tornado photo earlier by Max Olson):

Here's a RAP model mid-afternoon analysis sounding at Centreville, AL showing the environment supporting this longest-track tornado of the day that could have possibly been rated EF4 had it directly hit a town: 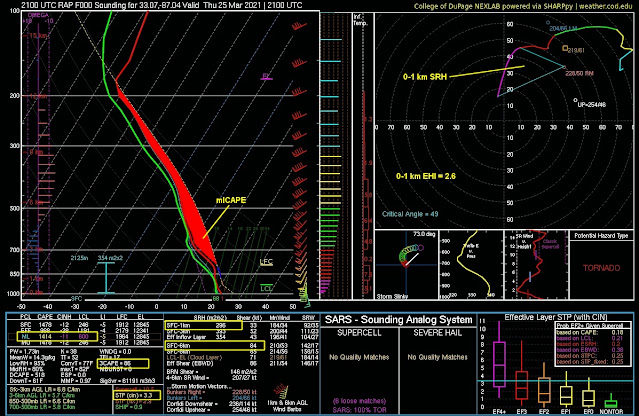 With around 300 m2/s2 of 0-1 km SRH, 1400 J/kg of mixed-layer CAPE, over 80 kt of deep-layer shear, and sizable low-level CAPE, this was a fairly potent environment for supporting supercell tornadoes.

As the outbreak extended into evening on March 25, a new storm became tornadic in central AL around 9:00 pm CDT (0200 UTC 3/26/21, not shown).  On the graphic below, the wind and instability environment for this storm at 0300 UTC 3/26/21 on SPC mesoanalysis composite tornado parameters was still quite good for supporting strong or violent supercell tornadoes: 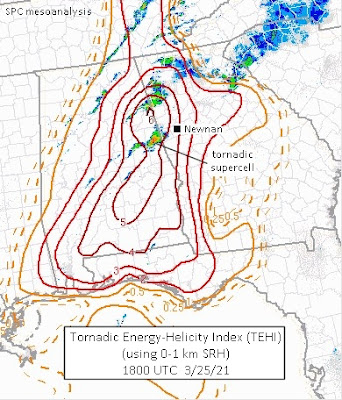 And that's in fact what happened, with a low-end EF4 tornado striking Newnan GA over the border from AL around 0400 UTC (11:00 pm EDT), killing one person.  After that, storms tended to outrun the warm sector instability axis as they moved eastward, and tornadoes ceased occurring.

Finally, to back up in scale and time a bit, here's the NAM model 9-hr forecast of 500 mb features and energy-helicity index (EHI, combining SRH and CAPE) at mid-afternoon on March 25: 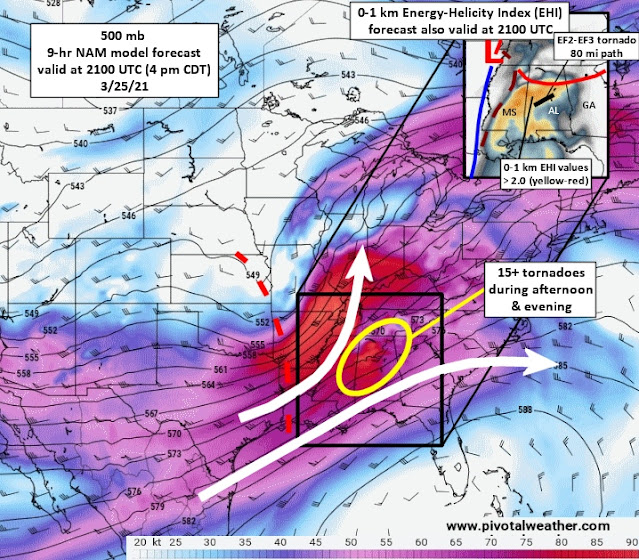 As on March 17, it was again a classic setting with plenty of SRH and CAPE in an area ahead of a strong trough at 500 mb (this time, a strong mid-level shortwave) where lift and forcing resulted from a "spreading" jet branches pattern ahead of this mid-level disturbance.

Last Saturday March 29, 2021 saw yet another deadly tornado day within an active sequence of days, with tornadoes in Texas, Louisiana, Arkansas, Tennessee, and Mississippi; one person was killed in northeast Texas (see photo of EF2 tornado near Carthage, Texas below): 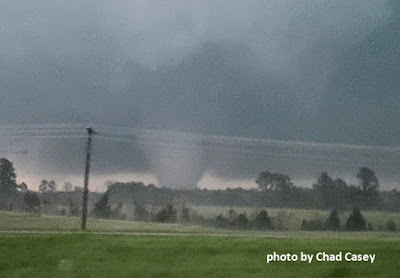 As I write this, it looks like conditions supportive of tornadoes will take a break and hold off until the middle of next week (around April 7th or 8th?) in the central and southern U.S.