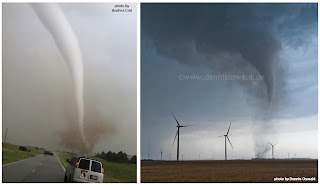 Yesterday (May 19) in south-central Kansas was a great reminder that potentially strong tornadoes (see images above near Rago KS in the 6:30-6:45 pm CDT / 2330-2345 UTC time frame) can occur once in awhile without the typical supercell processes that involve large low-level wind shear or storm-relative helicity.  I've written peer-reviewed papers on this subject for NWA Electronic Journal (2005, see here) and Weather and Forecasting (2006, see here).  In particular, the setting shown in the 2005 NWA paper with Jim Caruso matched what happened yesterday (which was largely unexpected) quite well.

Non-supercell tornadoes that we tend to call "landspouts" (because of their seeming similarity to waterspouts, but over land) generally occur on sharp boundaries and get their "spin" from stretching of vorticity associated with the sharp wind shift, often seen as a fine line on radar or even satellite (see the frontal boundary in south-central KS on the satellite image above).  While the boundary is the most important ingredient, the environment usually includes steep low-level lapse rates (a rapid drop in temperature above ground) in the lowest 1 or 2 km due to strong surface heating and no temperature inversion (little or no CIN or convective inhibition), along with well-mixed low-level moisture.  Such tornadoes can occur even if the spread between temperature and dewpoint is large and cloud bases (LCLs or lifting condensation levels) are quite high, unlike supercell tornadoes. Notice that the Rapid Refresh sounding above, 30-40 minutes before yesterday's first tornadoes, had all these characteristics.  Such a profile would promote rapid low-level upward stretching under storm updrafts, and if the stretching with thunderstorm updrafts were to occur directly over a wind shift boundary with vertical vorticity or "spin" along it, that would increase the chance of tornadoes.

The morning NAM and HRRR forecast panels above for mid to late afternoon on Saturday suggested that these ingredients (boundary, steep lapse rates, low-level moisture with little CIN, and convection on the boundary) might be in place for a "mesoscale accident".  Short-term forecasting of such set ups is never easy and depends on everything coming together just right.  But certainly, with so many tornado reports in the Kingman/Harper County area of south-central Kansas during the 90 minute period 5:30-7:00 pm CDT (2230-0000 UTC), including one tornado that significantly damaged wind farm turbines, everything came together in spades.

The surface map and SPC mesoanalysis panels above show these same ingredients coming together in real-time on the 2200 UTC panels before the tornadoes.

In contrast, the next SPC panels above include 0-1 km storm-relative helicity (SRH) at 2200 UTC, showing how poor the low-level shear environment was yesterday in regard to supercell processes.  However, the surface vorticity panel by it shows how much vertical vorticity was focused and available with the boundary for non-supercell processes.

The 3 radar panels above also show some interesting mesoscale features. Along with the storms "back-building" to the south-southwest like a "zipper" on and directly over the boundary (common in prolific "landspout" events), notice the southwestward-moving outflow boundary (another radar fine line) visible behind the frontal boundary. As this intersected the frontal boundary progressively southward, it appeared to help in the generation of successive tornadoes, including the tornadoes near Rago KS tornado that occured in northern Harper County KS about 15 minutes after the last image above.  I've seen this before in prolific landspout events when the radar is close enough to see it, and it could be an important issue in the production of stronger "landspout-type" tornadoes.

One other issue I will mention is the Non-Supercell Tornado parameter (NST, not shown) found on SPC's mesoanalysis site.  It performed _horribly_ yesterday, showing no values at all during the outbreak.  I'll have to look back at the ingredients that go into the NST parameter, but my impression is that it depends too much on the presence of low-level (0-3 km) CAPE, which may or may not be part of the environment in "landspout" settings (see the earlier sounding).  What's probably more important is well-mixed moisture in the lowest 1-2 kilometers along with the steep low-level lapse rates, and a lack of CIN (convective inhibition) and absence of a temperature inversion that might otherwise slow stretching in low-levels.  If I were writing the papers now that I referenced earlier, I would modify my description of these ingredients.

At any rate, as I've heard Chuck Doswell say many times, there are many ways to get a tornado.  Mother Nature doesn't care if the vorticity to be stretched is from SRH (tilted horizontal vorticity) or a sharp wind shift boundary (localized vorticity already oriented vertically).  A prolific non-supercell tornado setting like yesterday doesn't happen very often, but for tornado forecasters it is definitely one to get familiar with and watch for.

Update:  Wichita NWS (see here) has rated one of Saturday's tornadoes that struck a farm northwest of Harper as EF3 in intensity. That's pretty impressive for an event driven primarily by non-supercell tornado (NST) processes.  It seems that the more prolific an NST event and the longer it goes on, the more intense and "supercellular" in nature the tornadoes can become, particularly if deep layer wind shear is significant (around 35 knots in this setting).

Saturday 5/5/12 over Nebraska was a good example of a "cap" bust where the surface warm sector was overlain by warm temperatures aloft at around 10,000 ft MSL (the "cap", see 700 mb 9 deg C isotherm on SPC graphics above through the day) that kept warm sector storms from forming.  This effectively eliminated any tornado potential for a day that had looked much more threatening on computer models a couple days before.  My wife Shawna and I saw this looking at morning and early afternoon data, and were concerned that daytime storms would be limited to the elevated environment north of the surface front .  So we elected not to storm chase today.

The chart above is a rough seasonal guideline I use regarding 700 mb temperatures that estimate the "cap" during maximum heating in the Central Plains.  Notice that 9 deg C (give or take a degree) is a very rough estimate of the "cap" in early May, and that was a good indicator today using the earlier SPC graphics.

The SW-NE stationary surface boundary over Nebraska (see map above) was "covered" by this cap through most of the day, which kept storms from initiating over central and northeast Nebraska in the warm sector.  It can also be seen on the SPC SBCAPE and EHI graphics above that the first cell to form in the evening was well north of this surface boundary in South Dakota and far away from a truly surface-based environment.  Storms did form in a line around and after dark behind the front (not shown) as the cap eroded from the west with the approach of an upper short wave of energy.  But the warm sector tornado threat was eliminated by the cap.

Yesterday, it came to my attention that someone was passing around Facebook a version of the SRH-CAPE chart I posted last year to suggest environment potential (low-level wind shear and instability) for significant tornadoes, using that to show how 5/5/12 would be a big tornado day in Nebraska.   Well... What actually happened on 5/5/12 is major reminder that tornado forecasting is about a lot more than just environment...  It involves assessing the surface pattern and warm sector orientation relative to where storms initiate (see my last post about April 27), as well the positioning and evolution of any "capped" areas that can keep storms from developing.  Severe weather forecasting is not simple stuff.