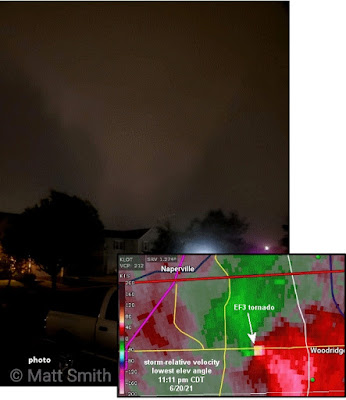 Sunday night's tornado after dark (photo above) that struck the western Chicago suburbs of Naperville, Woodridge, and Darien in Illinois (IL) shortly after 11:00 pm CDT injured 11 people.  Fortunately, no one was killed, with good watches and warnings in advance.  The tornado was EF3 in intensity, and left a damage path of around 16 miles in length.

I noticed on social media early on that several people called this a "QLCS tornado" (QLCS stands for 'quasi-linear-convective-system'), a type of non-supercell tornado that can occur within bowing squall lines.  It is true that the tornadic storm was embedded within a line of storms.  However, to be clear and accurate, this was definitely _not_ a QLCS tornado -- it was a supercell tornado with a well-detected mesocyclone (rotating updraft) on radar, seen on the inset in the tornado photo above showing storm-relative velocity.  Because it was a supercell tornado with a distinct mesocyclone on radar before the tornado, a radar-based tornado warning could be issued for parts of DuPage County (the county where Naperville is located) around 20 minutes before the tornado developed.

QLCS tornadoes tend to be brief, relatively weak, and more difficult to see on radar, making them more difficult to warn.  A QLCS tornado that struck the southeast corner of El Reno, Oklahoma after dark on the evening of May 25, 2019 (not shown) lasted only 4 minutes and traveled only around 2 miles.  It was briefly detectable on radar due to the close proximity of El Reno to the NWS radar near Norman, but could only be warned with 2 minutes lead time, not even enough time for sirens to sound in El Reno before the tornado struck.  It killed 2 people and injured 29, even though deaths and injuries are rare with QLCS tornadoes.

Back to June 20, 2021, the 3-panel composite reflectivity radar image below shows the broad evolution of the line of storms and the embedded supercell and mesocyclone (small white circle) from 10:45 pm to 11:15 pm CDT: 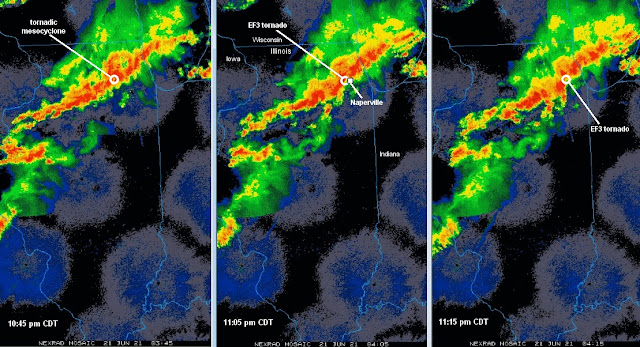 It is important to remember that it is not unusual for supercells to be embedded within a line of storms, but that does not mean that tornadoes associated with such storms are QLCS tornadoes.  A primary difference is the mid-level mesocyclone visible on radar, often in advance of a tornado.

A brief look at the local setting and environment over northern IL on Sunday evening June 20th showed a quasi-stationary outflow boundary associated with the east-northeast to west-southwest line of storms across the Naperville-Chicago area: 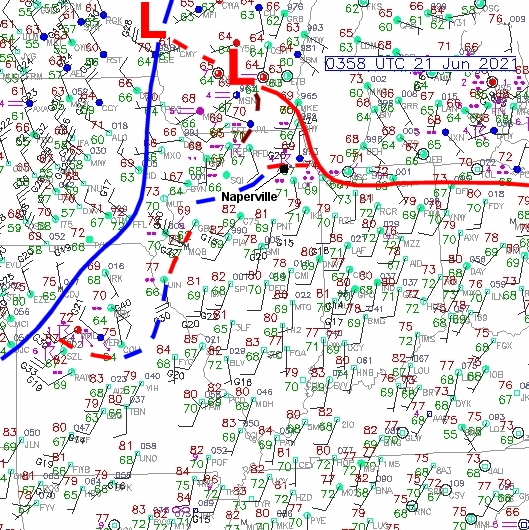 This boundary may have helped to generate the tornado as the embedded parent supercell moved east along it, taking advantage of increased low-level wind shear and convergence on and near the boundary, as well as the temperature/moisture contrast across it.

SPC mesoanalysis graphics near the time of the tornado also showed the environment near the boundary over northeast IL to be supportive of supercell tornadoes: 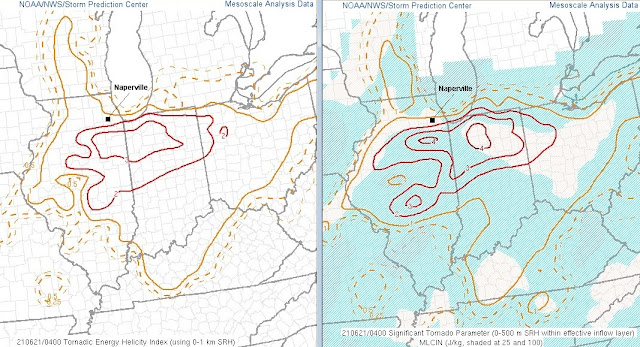 A short-term HRRR model forecast of the basic energy-helicity index from early evening also showed maximized combinations of SRH and CAPE near and just south of the local boundary across the Naperville-Chicago area: 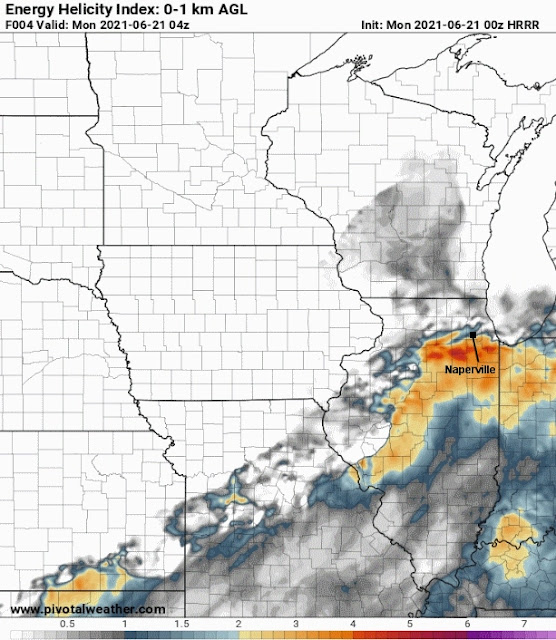 So, ingredients supportive of significant supercell tornadoes were definitely in place over northeast IL late on the evening of June 20, 2021.

Again, the fact that the tornado was associated with a supercell and detectable mesocyclone on radar made warning in advance more possible, an important difference in contrast to QLCS tornadoes.  QLCS tornadoes are shallower circulations that are more transient and harder to detect on radar, and therefore more difficult to warn.

It is important to understand this distinction.