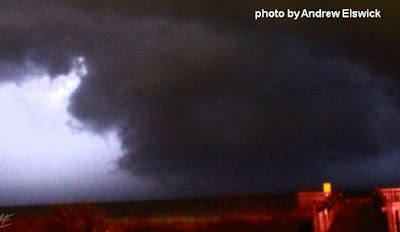 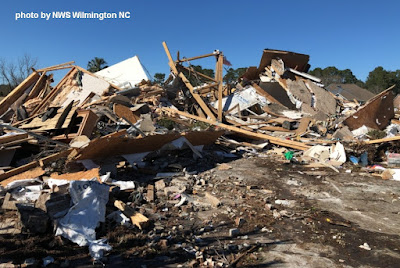 Last Monday's EF3 tornado near the coast of southeast North Carolina (north of Sunset Beach NC) killed 3 and injured 10.  Because it occurred at night (between 11:30 pm and midnight EST), there were no photos of the tornado, but a storm chaser managed an image of the tornadic supercell (top photo above) off the coast east of Myrtle Beach, South Carolina (SC) around 30 minutes before it struck on land just north of the NC-SC border.   The 2nd photo above shows some of the impressive damage (see this page on the tornado from NWS Wilmington NC).

There was no tornado watch in NC ahead of the storm, and a tornado warning was not issued for Brunswick County where the tornado occurred until 5 minutes after it developed.  That's because it was far from an obvious forecast setting, which is worth posting about here.  The environment was also evolving rapidly, and the tornado developed fast on radar (not shown) when the supercell moved on land.

A forecast and nowcast problem in this case was that surface-based (sb) instability at 11:00 pm EST 2/16/21 (0400 UTC) appeared to be well off shore from the Carolinas (see sbCAPE on the first panel below from the SPC mesoanalysis):

When there is no surface-based instability within a severe weather threat area, storms that do occur are considered to be "elevated", meaning that the instability (CAPE) supporting the storms comes from lifted air located somewhere above the ground.  Because tornadoes by definition occur at the ground (different from a "funnel" aloft), tornadoes are generally not expected in such elevated settings because air at the ground is typically too stable to support tornadoes.

This "elevated" factor affected composite tornado forecast parameters such as the effective-layer significant tornado parameter (STP), shown in the 3rd panel of the SPC graphic above, where effective STP was near 0 along the coast of the Carolinas, a result of this apparently "elevated" environment.

However, looking at mixed-layer CAPE (mlCAPE, 2nd panel in the graphic above), which uses an average of the temperature and moisture properties within the lowest 1 km above ground, notice that some CAPE (around 500 J/kg) was present right along the northeast SC and southeast NC coast at 0400 UTC near Sunset Beach (black square dot).  This is because there was significant moisture and increased temperature flowing northward above a shallow stable layer at the ground.  A RAP model sounding profile at Southport, NC (roughly 25 miles east of Sunset Beach), modified using a 0430 UTC temperature and dew point surface observation of 64 deg F and 64 deg F, showed this: 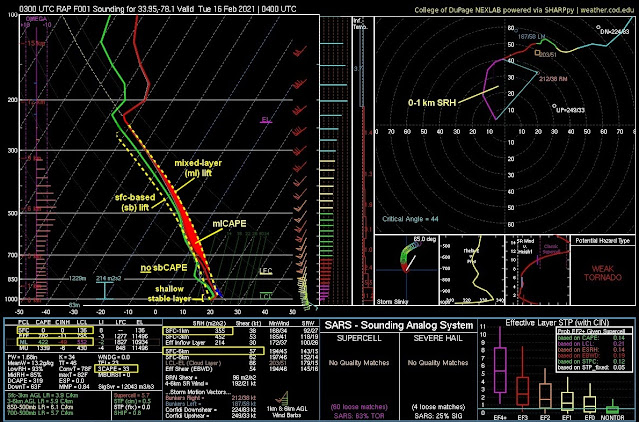 Notice  that the yellow dashed lifting curve at left on the graphic above (representing a surface-based lifted parcel of air) generated _no_ CAPE, suggesting an "elevated" environment.  But in contrast, the yellow dashed lifting curve at right (representing a lifted parcel of air from around 0.3 km above ground), did indicate notable CAPE, as seen by the red mlCAPE area on the sounding.

In other words, significantly unstable air was present less than 1000 ft above the ground, just above the very shallow stable layer.  It was this instability, combined with large low-level wind shear (storm-relative helicity or SRH of 350-400 m2/s2) near a warm front that helped support low-level rotation and a tornado in the supercell that moved on shore near Sunset Beach NC.  Apart from the shallow stable layer, the environment was a small instability and large wind shear setting often typical of southeast U.S. tornadoes in the cool season.

Warm fronts with significant combinations of CAPE and SRH along and near them are recognized in forecasting as potentially supportive of tornadoes with supercells that move along with or across them.  The surface map below at 11:00 pm EST (0400 UTC) shows that, indeed, a warm front was present moving northward near the NC-SC border along the coast: 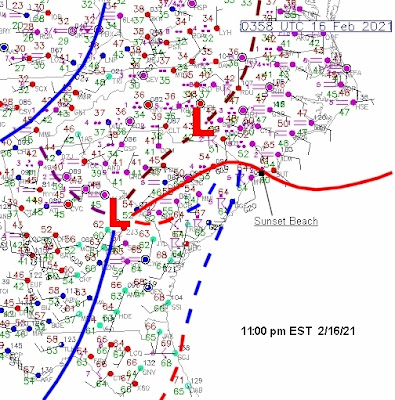 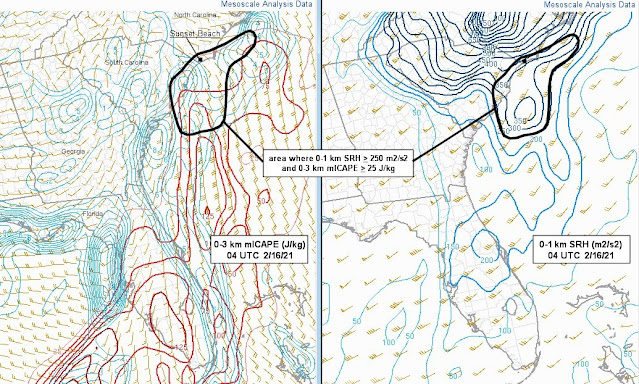 Although these ingredients were present only in a narrow strip along the coast, they apparently were enough to support the deadly supercell tornado near the warm front and the coast.  But the shallow stable layer near the ground discussed earlier masked this potential by suggesting an elevated environment along the same warm front that was actually not as significantly "elevated" as it looked at first glance.  This was due to the shallowness of the stable layer along the coast and the warmth/moisture flowing northward just above the ground.

Radar below shows the supercell just off shore at 10:00 pm EST (0300 UTC) that eventually moved on shore in NC near Sunset Beach around 11:30 pm EST (0430 UTC), interacting with the surface warm front and CAPE/wind shear just above the ground to produce the deadly tornado that lasted until midnight EST: 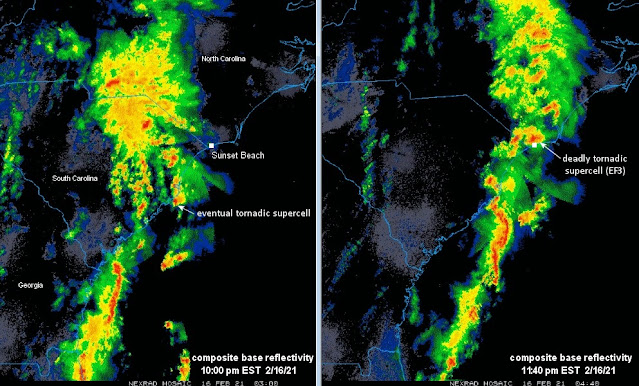 As the supercell moved farther inland away from the coast, the low-level stable layer apparently became too deep, eliminating near-surface CAPE, and there were no other tornadoes over eastern NC.

Forecast maps from the morning of February 15 did hint that there might be ingredients for a marginal possibility of tornadoes near the SC-NC coast, but that potential was certainly not very evident.  Below are the NAM model 500 mb forecast for mid to late evening, and a 2-panel NAM model forecast of mlCAPE and 0-1 km SRH: 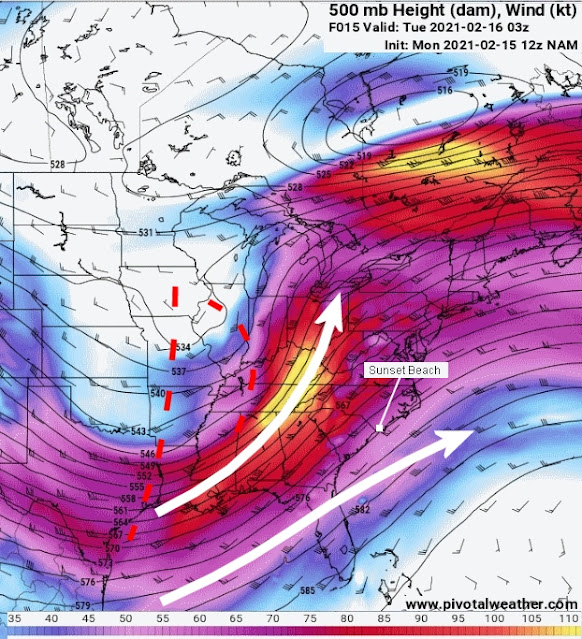 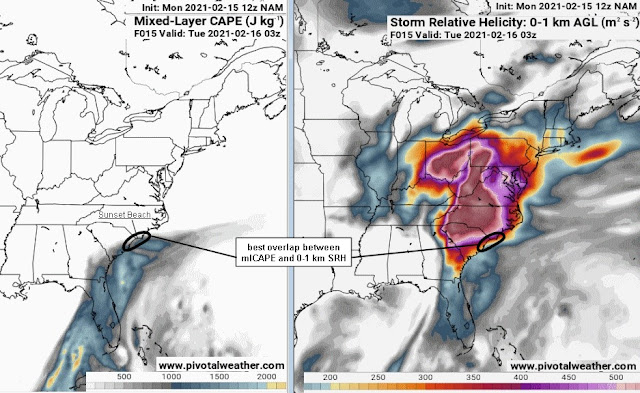 At 500 mb (roughly 18,000 ft above sea level), a large trough was moving through the mid-section of the U.S., bringing with it last week's news-making frigid arctic cold to the central Plains and particularly Texas.  Ahead of this trough, a spreading jet branch pattern was over the southeastern US providing lift through diffluence, and at mid-evening some mlCAPE was forecast just touching the NC-SC coast, barely overlapping large 0-1 km SRH near the afforementioned warm front.  This narrow  juxtaposition of ingredients was a hint of sorts, but only a small one and nothing that appeared very threatening or alarming for the evening forecast environment.

Earlier on 2/15/21 (not shown), an EF2 tornado struck southwest Georgia at mid-afternoon, also located near the same warm front that traveled rapidly during the day from the Florida Panhandle all the way to the Carolinas. The warm front in essence outran the instability axis as it moved across eastern Georgia and into South Carolina during the late afternoon and early evening, but then encountered a new fetch of instability again by late evening coming off the Atlantic Ocean along the coast of the Carolinas when the deadly tornado occurred.

Warm fronts are a feature to watch carefully in tornado forecasting, particularly fast-moving ones as in this case.  Often the environment in the immediate vicinity of the warm front may appear "elevated" with a layer of cool surface air north of the front.  But if the front is moving rapidly, the environment may be changing rapidly as well with warm/moist near-surface air flowing quickly northward, producing CAPE where there was none an hour or two earlier.

This case also emphasizes that when a cool near-surface layer is very shallow along a warm front, sufficient instability may be present to support tornadoes even if the setting appears "elevated" at first glance.  Rapidly-moving warm fronts can really modify and change a local environment quickly.

Posted by Jon Davies at 6:32 AM No comments: