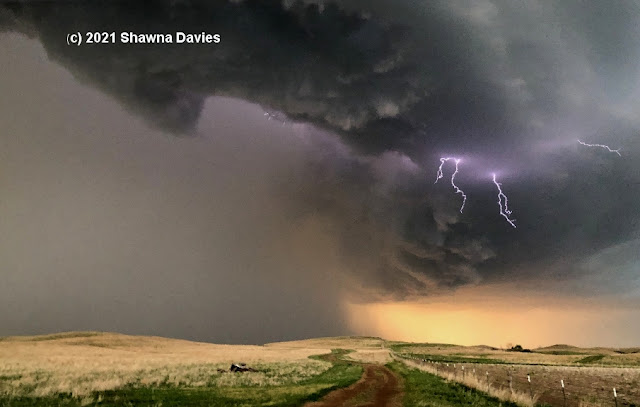 Last Saturday's HP supercell at early evening west of Salina (see Shawna's dynamic photo above) was our first chase in nearly a year, as Kansas (KS) has been rather quiet concerning severe weather recently.  The setting did have some similarities to the May 1, 2018 tornadic supercell set up northwest of Salina three years ago in that storms formed in west-central KS at the north edge of a "cap" (warm layer of air aloft near 10000 ft MSL), and in each case at least one storm moving east-northeast became an evening supercell near Ellsworth, KS.

But Saturday's supercell was non-tornadic and high-precipitation ("HP") in character, while the May 1, 2018 supercell produced an EF3 tornado on the ground for around 14 miles.  Sometimes it is informative to compare cases in the same geographic area that appear to have similar settings at first glance, but end up with very different results, which I'll do briefly here, as well as summarize our storm chase.

The NWS-analyzed surface map at 7:00 pm CDT (0000 UTC 5/9/21) in the first panel below showed a double-barrel surface low near a triple point over west-central KS, northeast of which storms had formed at mid to late afternoon... a classic severe weather setting  sometimes associated with tornadoes: 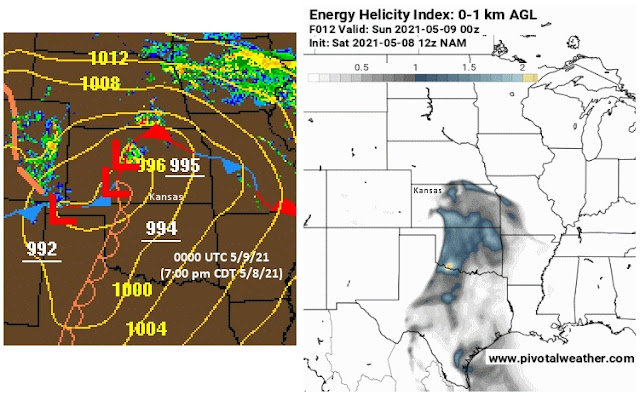 The 2nd panel above also shows the NAM model 12-hr forecast of the 0-1 km energy helicity index (EHI, combining instability and low-level wind shear) valid at the same time as the surface map in the first panel.  EHI values approaching 2.0 into central KS suggested that tornadoes might be a possibility, along with the morning SPC outlooks (not shown) that showed a 5% probability of tornadoes in central and north-central KS... not high but not insignificant, either.

Shawna and I followed a couple cells that had formed west and southwest of La Crosse, and had became a loose cluster of storms as they moved north of Great Bend.  Out of this "cluster", a high-based supercell formed after 7:00 pm CDT west of Ellsworth, KS: 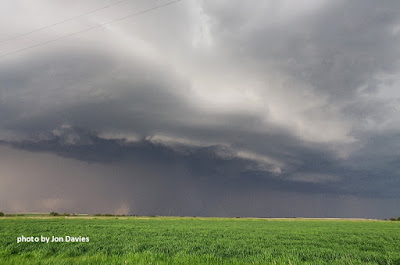 This storm moved across Ellsworth producing wind gusts, heavy rain, and some nickel-size hail, and we were able to get in front of it again on Hwy 140 heading east toward Brookville and Salina.  Here's Shawna's shot of this high-based cell near Carneiro looking west-southwest as I snapped some pics in the foreground: 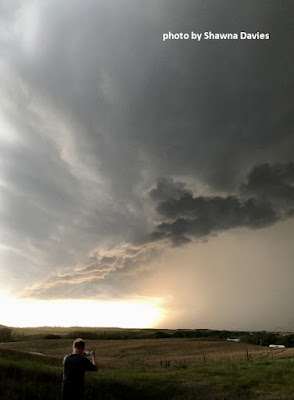 This HP storm really took on some impressive structure west of Brookville, with a dark roiling high-based shelf (the storm was outflow-dominant at this point, with winds already shifting to the west at our location in front of the shelf).  Staccato cloud-to-cloud and cloud-to-ground lightning bolts were visible along the outflow shelf, and I took the picture below of this "angry" supercell looking north (similar to Shawna's photo at the top of this post, but without the cool lightning) from west of Brookville as the storm approached us: 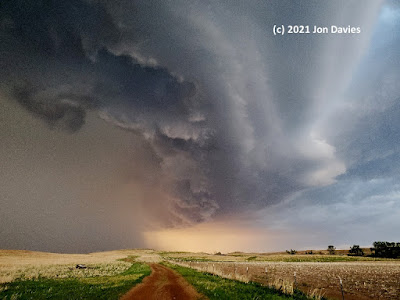 The high outflow base and outflow-ish nature of the storm eliminated thoughts of tornadoes at this point, but it was a beautiful storm in a pretty setting (the Smoky Hills).  We reached Salina with darkness upon us, and after watching lightning for a while, we headed back to Kansas City.

One problem working against tornado potential on this day appeared to be high lifting condensation level (LCL) heights (up near 2000 m above ground) that allowed evaporative cooling as rain fell through the deep sub-cloud layer, generating cool outflow air that undercut the storm's rain-wrapped mesocyclone.  Another issue was somewhat weak winds aloft in mid-levels that generated just enough deep-layer shear (25-30 kt) to support a supercell, but one that was HP in character, adding to the outflow-ish nature of the storm.  The morning HRRR model forecast these limitations rather well: 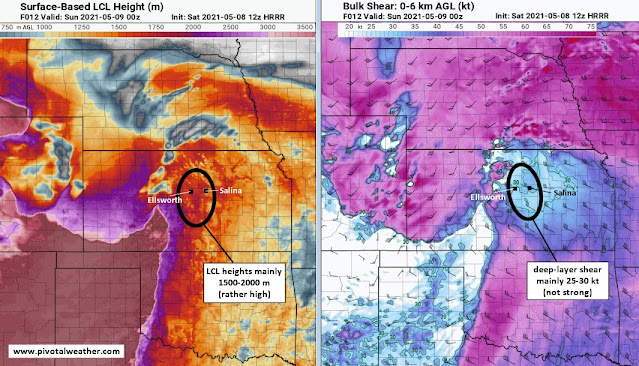 But the morning HRRR model also did a good job forecasting the supercell at early evening, with a mid-level rotation track indicated west of Salina: 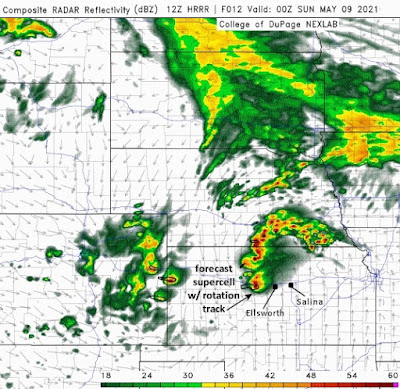 As mentioned earlier, the track and timing of this supercell were similar to the May 1 Tescott tornadic storm back in 2018.  However, there were some key differences in the environments, as indicated by the red highlight boxes in the table of parameter comparisons from SPC mesoanalysis graphics (not shown) between the two events listed below: 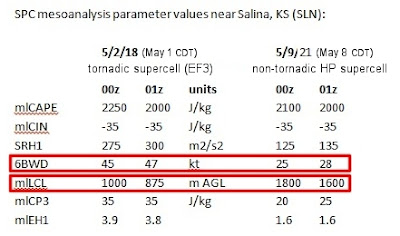 Apart from smaller low-level wind shear (0-1 km storm-relative helicity or SRH) on May 8, the main differences were much higher LCL heights compared to May 1, 2018, and smaller deep-layer shear (0-6 km bulk wind difference or 6BWD), confirming the same issues raised by the HRRR model forecast discussed earlier.

Here's a RAP model analysis sounding (similar to what is used in generating SPC mesoanalysis graphics) at Ellsworth, KS valid at 7:00 pm CDT on May 8, 2021, highlighting in yellow and red these same problematic issues in the environment regarding tornado potential at the time the supercell was ramping up west of Ellsworth: 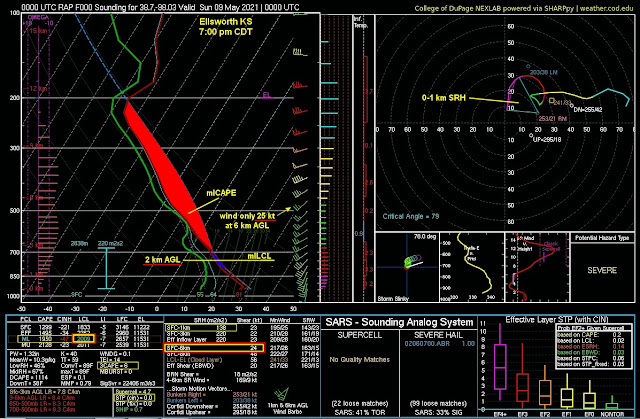 This sounding confirms that LCL heights and deep-layer shear were two negative factors in the environment that probably worked against tornadoes on May 8.

As the evening went on, low-level shear increased (SRH, not shown) and LCL heights lowered quite a lot (not shown) as surface temperatures cooled.  But, low-level stability (convective inhibition or CIN) also increased (not shown), suggesting that storms were not strongly surface-based near and after dark, so that much of the instability was coming from well above the ground, working against the formation of tornadoes.

Before closing, it is interesting to look at a later RAP model analysis sounding for Salina at 10:00 pm CDT (0300 UTC 5/9/21).  This sounding was estimating the environment in front of a 2nd supercell that formed behind the one we chased earlier, and was tornado-warned based on radar-detected mid-level rotation around 10:11 pm CDT: 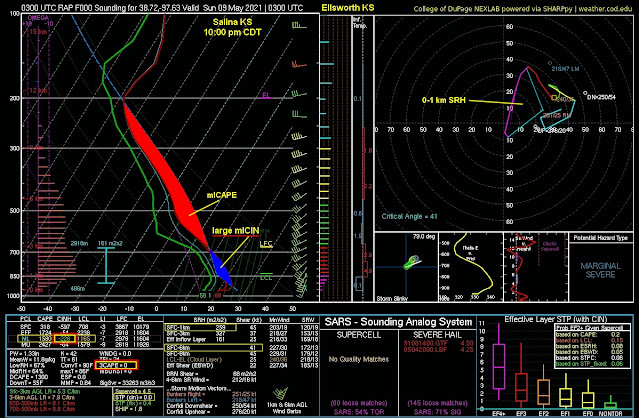 Notice how large the CIN (blue area on the thermodynamic diagram) had become after dark, with more than 225 J/kg of inhibition.  This was the result of outflow air behind the earlier supercell, now bowing out well east of Salina (SLN) on the radar image below, shortly before 10:00 pm CDT: 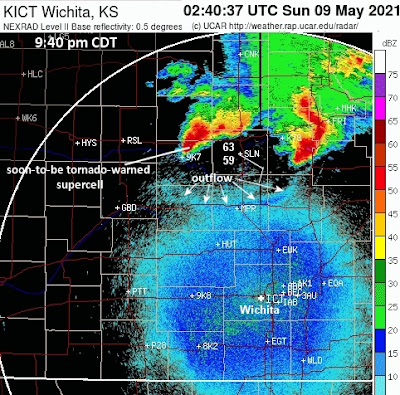 I've indicated on the radar image the new tornado-warned cell west of Salina and the "fine line" showing the trailing outflow boundary from the earlier supercell (white arrows).  Also note the temperature and dew point at Salina (63 over 59 deg F) within this outflow just before 10:00 pm CDT.  All this information suggests that this new supercell was ingesting cool outflow air that would undercut and eliminate any true tornado potential with this new supercell.

I was a little surprised that NWS issued the tornado warning, based on radar and environmental data above.  Although ping-pong size hail fell with this 2nd supercell, no tornado occurred and the warning was soon dropped.  This re-affirms how outflow near the ground can really interfere with tornado production.

The May 8, 2021 central KS case is an interesting case to study regarding how factors like LCL height and relatively weak deep-layer shear can limit supercell tornado potential.  These are two easy-to-overlook ingredients that require careful consideration in tornado forecasting.

Posted by Jon Davies at 4:36 PM No comments: