A look at landspout tornado formation in northwest Kansas on June 21, 2020 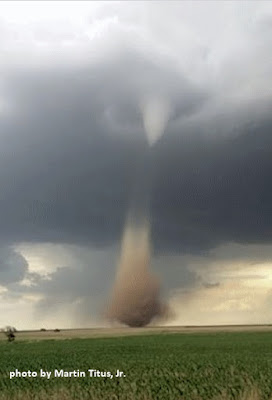 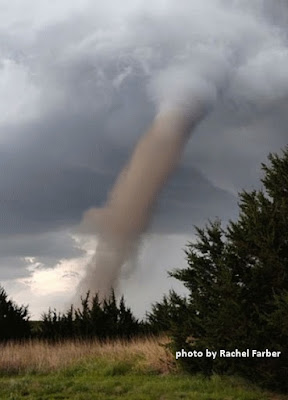 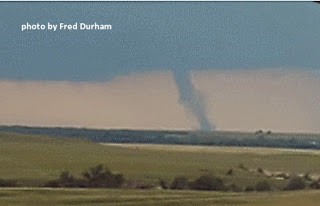 I've heard quite a few chasers "complaining" :-)  about the lack of tornadoes in May & June 2020 over the central Plains.  That dearth of significant tornadoes is actually a _good_ thing, because they obviously can kill and injure people and turn lives upside down.  But I do sympathize with chasers who have a desire to see tornadic storms out in open country where damage is minimized.

I haven't done a blog post since mid May (life has been busy on several fronts).  So, with the relative lack of Plains tornadoes in 2020, I thought I'd write something about last Sunday's (6/21/20) landspout tornado in northwest Kansas west of Hill City (see images above).  It's also interesting to look at how a day that appeared somewhat promising to many chasers for supercells and possible tornadoes in west-central Kansas didn't pan out very well.

First, the landspout tornado.  These are not really forecast-able, as they are the result of mesoscale "accidents" where ingredients (a sharp slow-moving boundary with instability and steep low-level lapse rates in the area and a storm intensifying right over that boundary) have to come together just right.  But in the one to three hours leading up to such an event, it may on occasion be possible to see some of those ingredients coming together.

Here's the surface map over Kansas at 2:00 pm CDT: 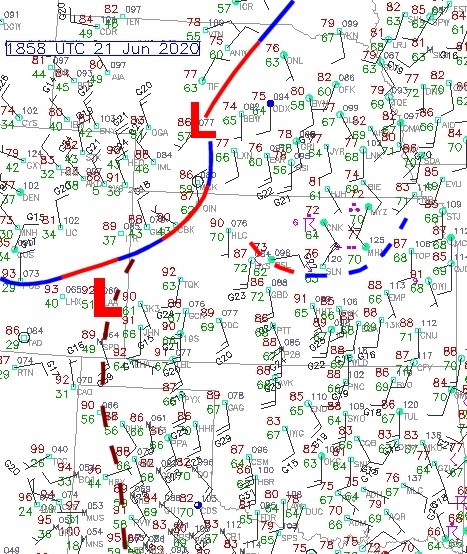 Note the wind shift boundary (a weak stationary front) over northwest Kansas west and northwest of Hill City.  This boundary was close enough to Goodland's radar that it could be seen as a fine line (see white arrows on lowest elevation base reflectivity images below) as storms built rapidly in the Oakley area ahead of the boundary at early to mid afternoon:

Notice on the radar images at 1944 and 1948 UTC (2:44 pm and 2:48 pm CDT) how the boundary began to bow northwestward in response to outflow from the rapidly developing storms to the southeast.  However, the same boundary on its northern end stayed largely stationary in place near Hoxie (HOX) and west of Hill CIty (HLC), and a cell formed quickly right over this segment of the boundary in the 1944-1922 UTC time frame, indicated on the last two panels of the radar above.

This is the cell that produced the landspout tornado roughly 1950-2005 UTC (2:50 pm to 3:05 pm CDT) northeast of Hoxie and west of Hill City.   Contributing ingredients were the storm forming right over the boundary in an environment with large CAPE and steep low-level lapse rates (> 9.0 deg C in the lowest 3 km above ground, see RAP model 1-hour forecast sounding for Hill City at 1900 UTC / 2:00 pm CDT below) to enhance stretching of vertical vorticity on the boundary: 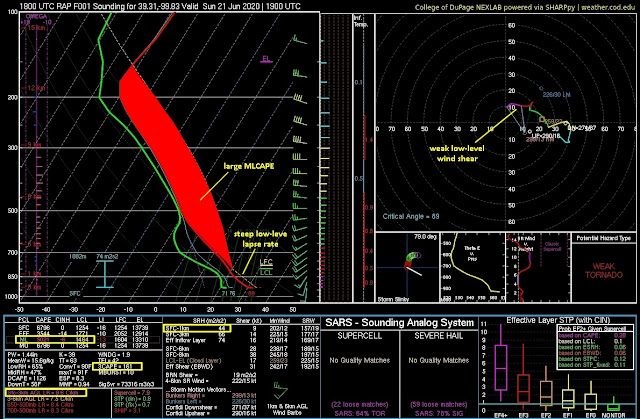 It also helped that this segment of the boundary was somewhat removed from the spreading outflow from the storms farther to the south and southwest (see radar graphic earlier).

I've always found landspouts fascinating as an alternative way to generate tornadoes without the horizontal wind shear (storm-relative helicity or SRH) needed for most supercell tornadoes.  Indeed, there was very little low-level wind shear early Sunday afternoon 6/21/20 in northwest Kansas (see the sounding above).  In this case, the vorticity (source of "spin") for the non-supercell tornado (landspout) came directly from the boundary.

Regarding the potential for long-lived supercells and supercell tornadoes on 6/21/20, it turns out the models from that morning were not very encouraging over west-central Kansas.  We'll look at that next.

Below is the NAM 9-hour 500 mb forecast for mid-afternoon showing a short wave disturance approaching from the northwest providing upward motion to fire up storms rapidly in an unstable environment over western Kansas.  Note that winds in mid-levels weren't that strong (only 20-25 kt): 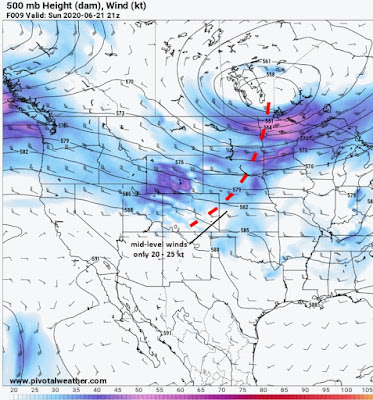 This flow aloft was enough to marginally support organized storms and supercells, but if storms developed rapidly over a large area, a pool of outflow air would probably undercut any supercells and make them short-lived as a squall line formed.
Also below are the 9-hour NAM forecasts of mixed-layer CAPE, 0-1 km SRH, and surface-based lifting condensation level (LCL) heights valid at mid afternoon:

Notice that, although forecast CAPE was large, 0-1 km SRH was very much lacking (as noted earlier), and in particular,  LCL heights were all quite high (> 1500-2000 m above ground).  Such high-based storms (LCL is an estimate of cloud base height) with rain passing through a relatively deep layer of unsaturated air below cloud base would result in evaporational cooling and enhanced cool outflow.  Indeed, although there was a short-lived supercell north of Dodge City around 4:00 pm CDT, cold outflow from the expanding cluster of storms over west-central Kansas at mid-afternoon began to race south, destroying the potential for discrete supercells and short-lived supercell tornadoes (see the photo below as storms were gusting out into a squall line near Dodge City): 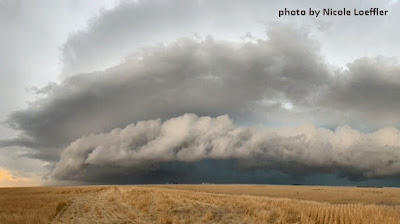 Some strong wind gusts were recorded in the Dodge City area and other parts of southwest and south-central Kansas as the storm cluster lined out and moved southward.
Key ingredients suggesting that this would be more of  a "gust-out" event instead of supercells and tornadoes over west-central Kansas were:
1)  High LCL heights to encourage evaporative cooling and strong outflow from storm clusters
2)  Lack of low-level wind shear, reducing potential for low-level rotation in early discrete cells
3)  Relatively marginal wind fields in mid-levels such that early supercells could not become well-organized and established
The landspout tornado in northwest Kansas came from non-supercell / non-mesocyclone processes before outflow began to dominate from expanding storm clusters.

All photos in this blog post are from various posts on Twitter made by local people and chasers last Sunday as I watched this event unfold from home in Kansas City.

Shawna and I have been able to chase a couple low-end but interesting cold-core tornado events this spring.  I'll try to post something about those in July as I get time.