Waterspout and separate tornado near Daytona Beach on 7/24/09 - a similar setting to some landspouts setups in the Plains? 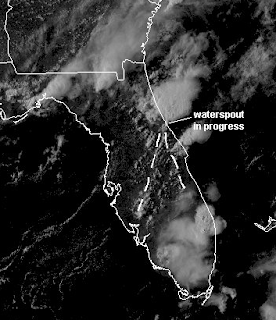 Friday 7/24/09 saw a photogenic waterspout in Florida off Ormond Beach (see 1st photo above) just north of Daytona Beach, followed by a tornado inland at Port Orange (see 2nd photo above, south of Daytona Beach) that damaged or destroyed many manufactured homes. The setting for Friday's waterspout and tornado appeared similar in some respects to some landspout tornado settings in the Plains.

The second set of graphics above shows lowest elevation angle radar reflectivity images from around 2100 UTC to 2230 UTC on Friday, with some key features labeled. The white dashed line and arrows in the first 2 images indicate the position of a sea breeze boundary inland over eastern Florida, seen by a fine line on Melbourne's radar. Notice how the sea breeze boundary extended back out over the Atlantic near Daytona Beach (DAB) at 2106 UTC, with thunderstorms having formed in a separate convergence zone to the northwest of DAB. By 2141 UTC, these storms had moved east and encountered/converged with the sea breeze boundary near DAB. At this time the waterspout was in progress off Ormand Beach (OMN) and lasted until around 2155 UTC. It moved slightly onshore at one point and did minor damage as a tornado. By 2230 UTC, the storms had back built along the boundary onshore to the south and southwest of DAB. Around 2220 UTC to 2230 UTC, a tornado developed inland over Port Orange, and did the aformentioned damage to many homes.

The boundary seen on radar (and also satellite, see 3rd graphic above) was of critical importance in generating the waterspout and later tornado. It is common knowledge that most waterspouts in Florida occur along land/sea breeze boundaries. What made this case interesting was that a tornado eventually formed inland from the same boundary, similar to how some non-supercell landspout tornadoes develop southwestward along stationary northeast-southwest boundaries in the Plains. A paper by Caruso and Davies discusses some of these Plains settings.

In addition to the boundary, SPC mesoanalysis graphics (last set of graphics above) from 2100 UTC on 7/24/09 indicated some environment characteristics that were somewhat similar to the Plains settings mentioned above. Low-level lapse rates (0-3 km) were steep and maximized just southwest of DAB (heavy black dot in the graphics), and 0-3 km CAPE was maximized as well. The combination of these ingredients with a stationary or slow-moving boundary over which thunderstorms are developing can increase stretching in updrafts to create non-supercell tornadoes using vertical vorticity along the boundary. Although the setting and orientation of the boundary did have some similarities to Plains landspout settings, it should be emphasized that such storms in the Plains are typically much higher based, and the low-level lapse rates tend to be much steeper (around 9 deg C per km) due to the higher elevation. Florida tornado settings don't require such steep lapse rates, low-level environments are much more moist, and land/sea breeze fronts provide plentiful boundaries.

WInds at 500 mb (see last SPC graphic above) were only around 20-25 kts over northeast Florida on Friday, so while one or two of the storms along the boundary may have had some brief/marginal supercell characteristics, it appears that the primary contributors to the waterspout and separate tornado were non-supercell/non-mesocyclone processes along the boundary.

There's some interesting things we found with nighttime tornado environments, including much larger storm-relative helicity (SRH), and significant differences in CAPE and CIN between the Plains and the southeastern United States. In the second paper, we looked specifically at a couple of significant nighttime tornado events in Kansas in 2008 that were associated with unusually large CIN and low-level stability.

I hope that meteorologists and students find these useful!

Posted by Jon Davies at 9:28 PM No comments: