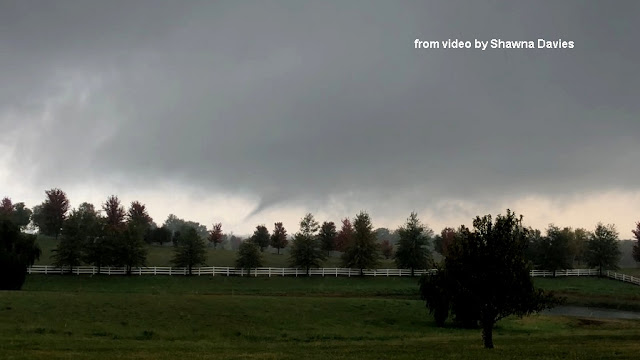 The past few months have been been a difficult period for my wife Shawna and me.  Her mother died, a friend died, our loving cat Sadie died, and there have been both health and family issues going on.  That's why I haven't posted in a while, and with  some other changes for us in progress over the coming months (such as readying our house for sale and deciding where to move), blog posts here will likely  continue quite few and far between.

However, we both were able to do a rare October storm chase last Sunday (October 24, 2021) close to home north of Kansas City (see image above), our first storm chase in months due to all that's been going on with us personally.  This blog post presents some photos and description documenting our October 24 chase.

The satellite and surface map image below at early to mid afternoon (satellite at 2:51 pm CDT or 1951 UTC; surface data at 2:00 pm CDT or 1900 UTC) shows that the setting over northwest Missouri (MO) was a "cold-core" situation (see here) with a surface low just west of St Joseph, and a mid-level low over southwest Iowa, with a warm front/Pacific cool front intersection near St Joseph: 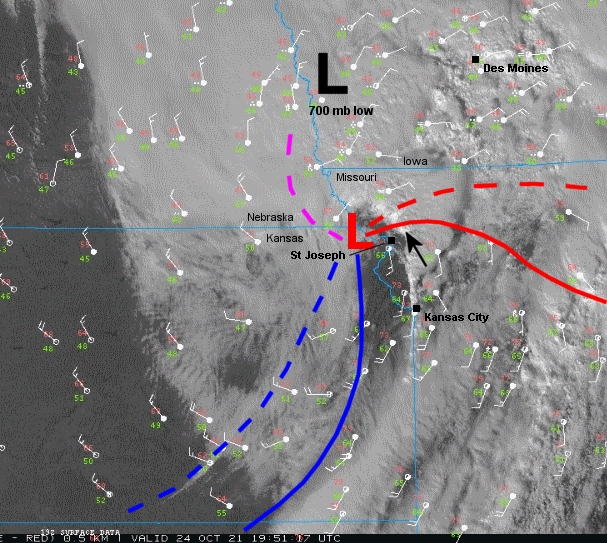 With a strong shortwave disturbance moving across the area (not shown, connected with the 700mb/500mb low) and associated cold air aloft located above surface temperatures in the 70's F and dew points in the 60'sF making for significant instability, we figured tornadoes were likely along the warm front just east of the surface low.  Backed easterly surface winds along and north of the warm front also made for sizable low-level wind shear in the area near St Joseph and eastward, upping the potential for tornadoes. 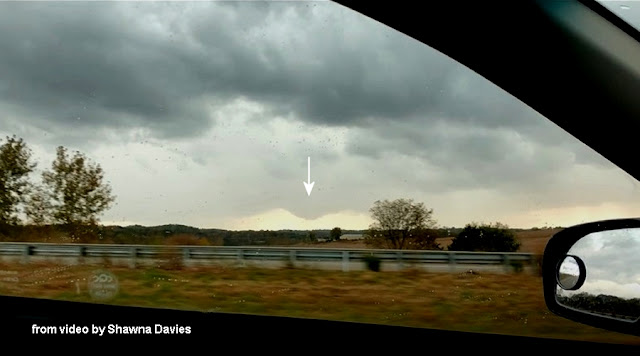 We moved east from Savannah, MO to follow this mesocyclone as it moved east-northeastward along the warm frontal boundary, and with cloud bases lowering in the warm frontal mixing zone, we watched what appeared to be a brief tornado that lasted 30-45 seconds, looking to our south-southwest from north of Avenue City (northeast of St Joseph): 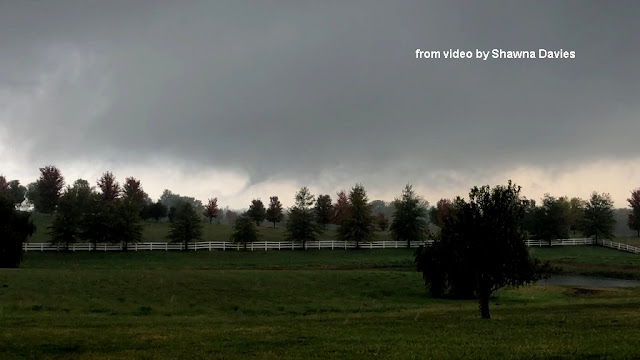 On the satellite photo shown earlier, the black arrow indicates the cell cluster that produced this probable brief tornado east of the surface low.

We intercepted this same mesocyclone near Rochester, MO, watching leaves swirling in the air and Shawna fascinated by wispy cloud filaments accelerating rapidly upward into the updraft as it passed just in front of us.  Here's the mesocyclone viewed moving away from us on Hwy 169, with both the flanking line and short updraft tower visible looking to our northeast: 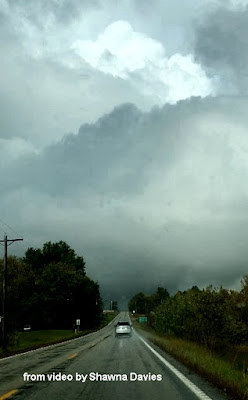 We had to drop south to Hwy 6 to head east and catch up with the mesocyclone along I-35, which took some time.  Meanwhile, our storm had combined with another nearby cell to form a supercell that produced a weak tornado southwest of Pattonsburg MO around 3:35 pm CDT that we couldn't see.

When we headed north on I-35 toward Pattonsburg, we could see the storm's mesocyclone again, with rapidly-moving cloud tags and brief funnels visible looking toward the northeast located in an area just east of Pattonsburg around 3:50 pm CDT: 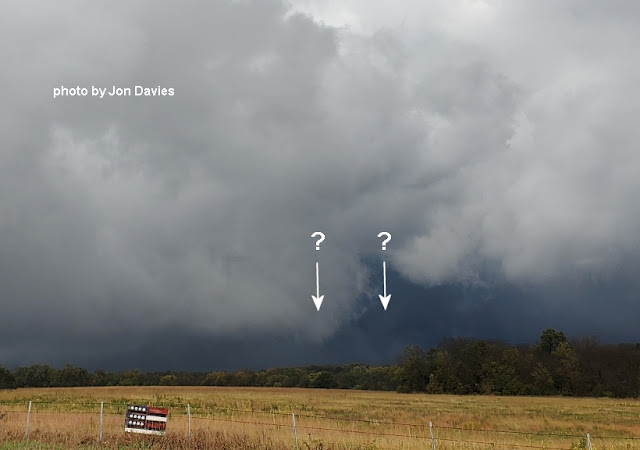 After that, with the storms moving away from us at close to 40 mph, and hilly, tree-covered terrain to our east and northeast, we decided to head back to Kansas City.

Out of reach to our southeast, we could see what had coalesced into a separate supercell between Cameron and Chillicothe, MO, and this storm produced several tornadoes, including the large tornado that later hit Purdin, MO shortly before 5:00 pm CDT doing EF2 damage (see image of that tornado below by Stephen Jones): 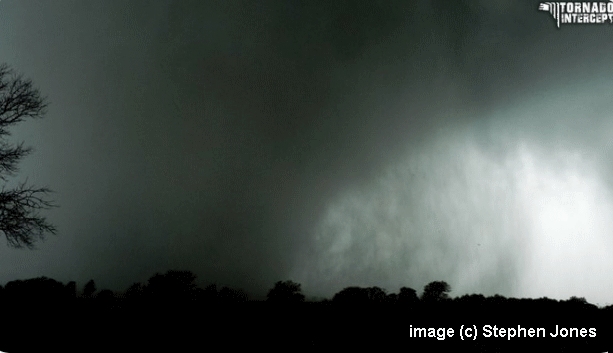 The 3-panel radar image below shows the evolution of storms between 2:12 pm CDT (1912 UTC) and 3:55 pm CDT (2055 UTC), with the small white arrow indicating the northern cell(s) we were following and documenting near the warm front:

The more southern cell west of Chillicothe (CDJ) on the last panel above is the one that produced the most tornadoes, including the EF2 Purdin tornado.

Most cold-core tornado settings associated with mid-level lows play out fairly quickly with brief, weak tornadoes.  With the EF2 Purdin tornado, this case was an exception that featured a broad (rather than narrow) warm sector, and instability (mlCAPE > 1500 J/kg, not shown) and low-level wind shear (0-1 storm-relative helicity or SRH > 200 m2/s2, not shown) increasing during the afternoon near and just south of the warm front into north-central Missouri.

This is highlighted in the panels below from the SPC mesoanalysis showing the Tornadic Energy-Helicity Index (TEHI, combining CAPE, SRH, and deep-layer shear with other parameters) at 1:00 pm CDT (1800 UTC) and 4:00 pm CDT (2100 UTC): 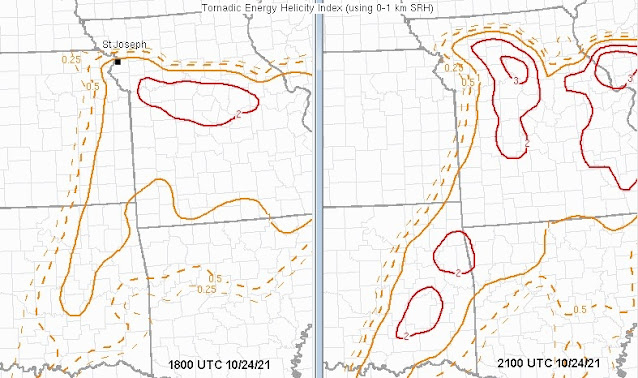 Notice the TEHI "max" of 3.0+ over north-central Missouri at 2100 UTC (2nd panel above) before the Purdin tornado.

Later that evening, the environment over east-central and southeast MO away from the cold-core mid-level low over Iowa became quite favorable for strong tornadoes (hinted at in the last TEHI panel above) when storms there became supercells that produced EF3 tornadoes after dark at St Mary, MO and Fredericktown MO.

It may be a while before I post again, so I just want to express my appreciation to all who follow and give me feedback about my work and severe weather posts.  Thanks a bunch, everyone!