Alabama tornado outbreak March 19, 2018 -- A look at the meteorological setting

My wife Shawna has been bugging me to start up my severe weather blog again 😊, so I thought I'd do a post about the setting for last Monday's episode of tornadoes in northern Alabama (March 19, 2018). With the exception of the February 24 outbreak from northeast Arkansas to south-central Tennessee, this was the first tornado outbreak heading into spring after a rather quiet winter.

Here is my preliminary mapping of the tornadoes in northern and eastern Alabama on 3/19/18, from online NWS surveys: 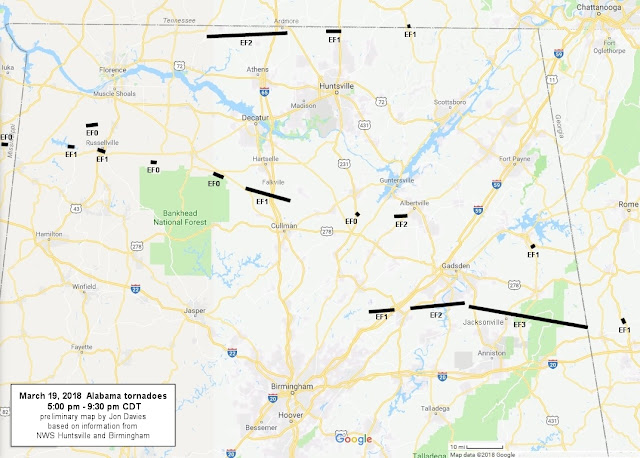 The tornadoes were produced mainly by three different supercells moving across the northern third of Alabama, as is suggested by the way the tornado damage paths line up from west to east or east-southeast along three different paths. Later in this post, I'll pay particular attention to the evening tornadic supercell that struck Jacksonville, Alabama with an EF3 tornado.

The Storm Prediction Center (SPC) did a great job of forecasting this outbreak. Also, local awareness and timely NWS warnings resulted in no deaths and only a few injuries. That's always great to see!

Forecast-wise, it wasn't too difficult to pick out the potential for tornadoes. The model forecast below showed strong west to east winds at roughly 18,000 ft MSL (a "southern-stream" jet, see thick white line and arrow) into the southeastern U.S., with an embedded short-wave disturbance approaching Alabama at 7 pm CDT on 3/19/18. The model forecast of 0-1 km energy-helicity index (EHI; see inset), which combines instability and wind shear important for supporting tornadoes, was also maximized over northern Alabama ahead of the short wave where thunderstorms were expected: 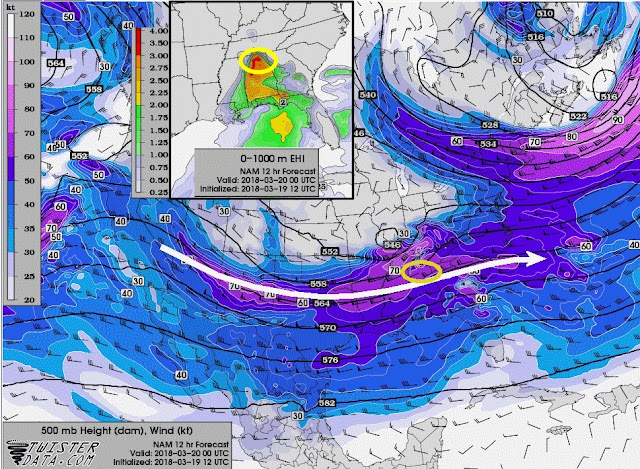 A side note about west to east southern-stream jet wind axes: Tornadoes seem to be more common along and just north of the southern-stream jet, rather than further south. This has to do with jet stream dynamics and related issues I won't get into here. But it's worth noting that the day before (3/18/18, not shown), tornado potential that was forecast for eastern Texas but did not verify was in an area south of this southern-stream jet axis. Yet on 3/19/18, when supportive tornado environment parameters were maximized just north of this same southern jet stream core, a number of tornadoes occurred.

Supercell A near the AL/TN border had been producing tornadoes during the prior hour and was weakening, at the end of its tornado-production phase. Supercell B was the largest, beginning in Mississippi before 5 pm CDT, and produced a number of weak short-track tornadoes across Alabama. However, the tornadic supercell of the day was the last one to form (supercell C), which developed rapidly after 7 pm CDT, and produced the long-track EF3 tornado that hit Jacksonville; this tornadic supercell was responsible for at least 7 injuries.

Why was cell C the strongest tornado producer? It's hard to say, but there are some possible clues. First, supercell B moving across Alabama during the late afternoon was large and long-lived, generating a traveling meso-low over northern Alabama (see the southernmost red "L" on the surface analysis below) that helped to focus and converge the low-level wind environment: 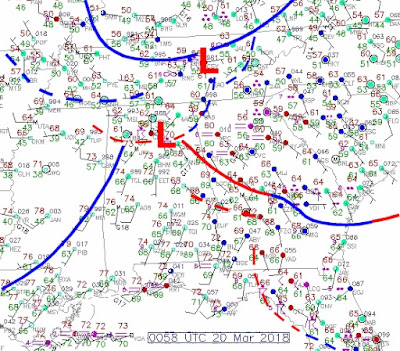 This wind stream out of the south and southeast can be seen on the streamline map of surface winds below at 7 pm CDT (00 UTC), flowing and converging into the area where supercell C formed rapidly between 00 UTC and 01 UTC (see the earlier 3-panel radar graphic): 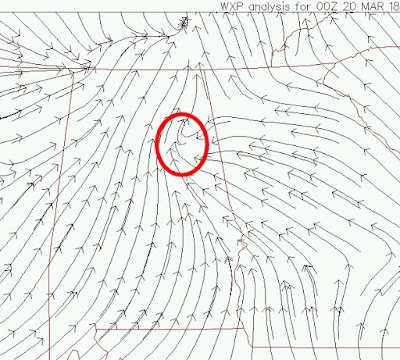 This area of increased low-level wind flow (also helped by the tendency for low-level winds ahead of storm systems to increase near and after dark) would certainly increase low-level wind shear (storm-relative helicity, SRH) that supports supercell tornadoes. The significant tornado parameter (STP) incorporates low-level wind shear/SRH as one of its key components, and, in the 8 pm CDT (01 UTC) graphic below from the SPC mesoanalysis page, STP was quite large and very focused just east of Birmingham: 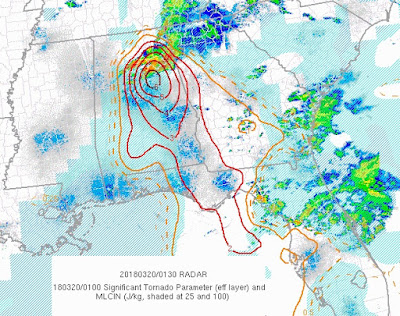 Another factor may have been the location of the stationary front (refer back to the surface map shown earlier) over east central Alabama. There's been plenty of research to indicate that tornadoes favor surface boundaries, such as warm fronts and stationary fronts, which increase wind shear through backing of surface winds. Supercell C from our earlier radar graphic would have interacted with this stationary front as it moved east and east-southeastward, improving its chances of producing tornadoes. However, as this supercell moved over into Georgia, it encountered increasingly cooler surface air northeast of the stationary front, and only produced an additional brief tornado or two.

So, with unobstructed wind flow and SRH to the south of newly formed supercell C northeast of Birmingham, it only took about 45 minutes from the storm's initiation for it to begin generating tornadoes, which is an impressively short time. The increasing southerly low-level flow, due both to supercell B's inflow and the diurnal increase of SRH near dark, in addition to the cell's interaction with the northwest-southeast stationary front, may have all contributed to this storm's efficient tornado production. The third tornado from supercell C (see photo below) hit Jacksonville shortly after 8:30 pm CDT (0130 UTC): 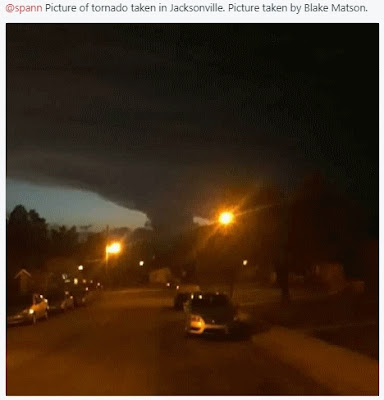 This tornado continued onward to the Georgia border for a track of over 30 miles, and was over a mile wide at one point. It is truly fortunate that this specific tornado only caused 4 injuries.

I'll try to do more posts as severe weather warrants and time permits this spring. Thanks for reading!

PS:  For anyone interested, my detailed peer-reviewed study of the meteorological setting for the devastating Joplin tornado back in 2011, published last December, is online here.