The Alabaster, Alabama tornado a few days ago (Thursday 3/25/10) was another reminder that tornadoes can and do occur in small CAPE environments, sometimes with only 200-300 J/kg of CAPE. Such tornadoes typically aren't very strong (the well-photographed Alabaster tornado was rated only low-end EF-1). A photo of the tornado showing the rear-flank-downdraft and a little structure is seen above. Alabama storm chaser Brett Adair also captured the tornado on video shown on The Weather Channel.

The setting had a sharp short wave at 500 mb (see 2nd graphic above) moving across Tennessee and Alabama, with only low to mid 50's F dew points at the surface ahead of a Pacific type cool front (see 2nd graphic above). Because online model forecasts typically are presented showing only areas of CAPE 500 J/kg and above, plan-view model forecasts and analyses didn't highlight the CAPE present over Alabama (see the 2nd graphic above). But with an NWS office located at Alabaster (the Birmingham area office) that is also a RAOB sounding site, and the tornado occurring just to the west at sounding time, the Alabaster tornado was one of those rare instances where an actual observed sounding was available in close proximity to the tornado-producing storm (see 3rd graphic above). This sounding shows the CAPE all bunched down below 600 mb (about 4 km in the vertical), very low in the profile. Given that this was a discrete cell in an environment with 250-300 m2/s2 of storm-relative helicity (SRH) and the CAPE was squeezed low in the sounding, low-level stretching and tilting probably facilitated the tornado. An interesting low-topped tornadic supercell case to study, and not associated with a closed cold-core 500 mb low.

As I write this, tornadoes with damage have been occurring over the Charlotte-Greensboro area of North Carolina, in another setting with small CAPE (< 500 J/kg) but very large low-level shear.

As I mentioned earlier this month, I had hoped to get a page up showing some interesting pics and graphics of the 1990 Hesston KS tornado 20 years ago. Unfortunately, things have been busy on my end, so that will have to wait awhile :-(. 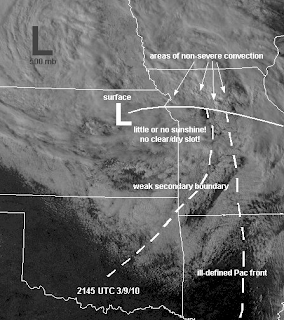 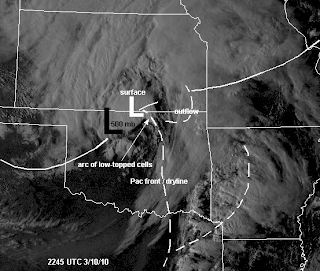 I've gotten lots of requests to discuss the two "cold core" systems that came through the central U.S. this week. Was the Hammon OK tornadic storm a "true cold-core-type" supercell? Why did the Monday 3/8 system generate tornadoes in western OK, but no severe weather near Kansas City the next day (3/9)? Why didn't the next system on Wednesday 3/10 produce tornadoes in Oklahoma or Kansas? There are not easy, concrete answers to any of these questions. It goes without saying that the atmosphere is enormously complex and something we'll continue to struggle with understanding. I'll try to offer a few thoughts and opinions here in this rather long discussion.

First, labels like "cold core" (coming from Ernest Goetsch's 1988 SLS conference paper, and Mike McDonald's 2000 Canadian paper) are clearly problematic. Labels may help get us in the general "ball park" so that we can begin discussing settings and issues without having to go into long preliminary descriptions each time we mention them. But labels mean different things to different people, and come with very different assumptions depending on the person and their experience. Certainly, the atmosphere doesn't recognize labels or behave according to them.

In my work on the subject (e.g., this 2004 paper with SPC's Jared Guyer, and this 2006 paper), I've stuck with "cold core" as a loose way to refer to tornado activity near 500 mb closed lows where surface dew points may look deceptively small for tornadoes to occur. People can argue what's "near" and what's "not near" 500 mb closed lows (Jared and I used roughly 200 miles as a subjective but practical range for most of the cases we examined, including several "missed" tornado forecasts), and they can argue whether a particular case is a "true cold core case" (whatever that is). But I do think that misses the point. Significant tornadoes with surface dew points below 60 deg F are rather rare (in my database of 2001-2005 events, only 17 of 255 significant tornado occurred with a dew point below that!). The EF2 Hammon OK tornado occurred in an area where surface dew points were 52 deg F at best (see 3/8/10 surface map above), near the northwest edge/tip of the warm sector. It's clear that the associated cold air advection aloft (see -20 C 500 mb isotherm drawn over 3/8/10 surface map above) was a key component in generating the instability needed for that tornadic storm. So, if the "cold core" label does nothing more than serve as a flag or reminder for forecasters to at least consider the possibility for tornadoes within roughly 200 miles of closed upper lows when surface dew points appear "marginal" (e.g., upper 40s-low 50s F), avoiding a "surprise" when reports initially come in, then it has done it's job. If others want to do studies and papers to better define what a "true cold-core" tornado event is, I encourage that. But beware getting caught up in labels and definitions at the expense of practical meteorological assessment and experience.

Several people have asked me why the Hammon supercell appeared so much larger horizontally with more "typical" structure (e.g., large RFD etc., see Charles Edward's excellent photo above) than many low-topped supercells near 500 mb lows. It's important to note that the western Oklahoma late afternoon environment on 3/8/10 had plenty of clockwise curvature to the wind profiles, with 0-1 km storm-relative helicity (SRH) at least around 200 m2/s2 (not shown). Add to that around 1000 J/kg of surface-based CAPE (not shown), and the atmosphere doesn't care whether the storm has a "cold core" look to it (whatever that is). The shear/CAPE combinations were certainly large enough to support a significant tornadic supercell oer western OK in this situation. For what it is worth, cells occurring much closer to the midlevel low will tend to look "smaller", both vertically and horizontally, but there are certainly no hard and fast rules.

Why didn't the same system produce severe weather and tornadoes/funnels in the Kansas City area the next day? No one can say for sure, but there was almost a complete absence of sunlight with clouds surrounding both the surface and broadening/distancing midlevel low (see 3/9/10 satellite image above). This lack of heating for instability, along with with less focus and definition to both the surface and upper systems, might account for the lack of severe reports. There was one possible funnel report near Cameron MO, and the southern cloud base of a cell passing over my house north of Kansas City had some good motion in it. But the lack of sun and a well-defined dryline/clear slot kept Shawna and me from chasing that day. I will observe that, if "cold core" systems are tornadic near the 500 mb low on day 1, day 2 rarely results in tornadoes within roughly 200 miles of the midlevel low. This probably has to do with how difficult it is for such systems to maintain a favorable focus, juxtaposition, and organization near the midlevel low as they evolve over a couple days time.

Finally, several people have asked me why there weren't tornadoes in northern OK and southeast KS on Wednesday 3/10/10, (the Arkansas tornadoes after dark were deep in the warm sector away from the 500 mb low and Pacific front/dryline, in a good shear/CAPE environment with surface dew points around 60 F). Shawna and I chased that day (see my blog on 3/11/10), and noted several things seeming to go wrong as the day evolved. First, the surface moisture was having trouble returning, which resulted in initial warm advection storms at early afternoon being very high-based over southeast KS way out ahead of the surface low. Enhanced evaporative cooling below these high cloud bases generated outflow and westerly winds in the Coffeyville KS area (see 3/10/10 surface map above), where one would have otherwise expected a broad fetch of east or east-southeast winds spiraling into the northeastward-moving surface low over northern OK and then southern KS. This reduced SRH and low-level shear, retarded surface heating and surface moisture, and just generally "messed up" what might have been a well-organized "spiraling" surface pattern. This midlevel system was so strong that it still generated a photogenic arc of low-topped convection with sunshine behind it (see 3/10/10 satellite photo above) that moved into Chautauqua and Cowley counties of KS, producing several brief funnels from the cold air aloft and lots of pea-sized hail. But the outflow air from these cells (we measured 38 deg F!) seemed far too cold for supporting tornadoes.

As I mentioned in a talk at Denver a few weeks ago, there's much more that can go wrong than can go right with so-called "cold-core" systems and their ability to produce tornadoes. At best during spring or fall, maybe 1 in 10 will produce tornadoes within 200 miles of the midlevel low, and one often won't understand very well what's evolving in real time. I guess that's what makes these systems so interesting and such a challenge to forecast. 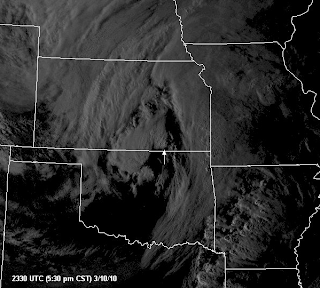 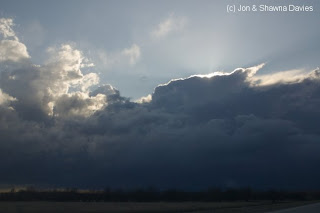 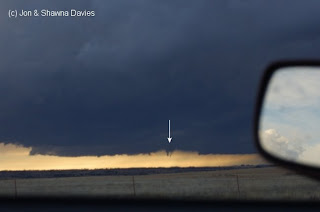 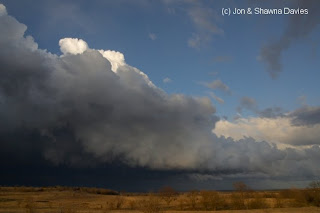 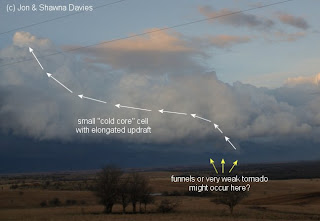 This week: 20 year anniversary of the Hesston tornado 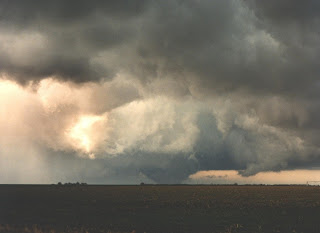 It was 20 years ago this week that an outbreak of tornadoes on March 13 1990, including the Hesston Kansas tornado, shook the central plains out of a several-year lull in significant tornado activity.

The Wichita Eagle has an excellent article by Stan Finger on the Hesston tornado at:
http://www.kansas.com/2010/03/07/1213543/1990-tornadoes-increased-awareness.html

Stan also has some photos and discussion on his blog at:
http://blogs.kansas.com/weather/

Later this week, I'll see if I can get some other review info about this event up on my web site. The Hesston tornado day was certainly one of the big turning points in my meteorological life.