Cold-core tornadoes in central Nebraska 12 May 2011 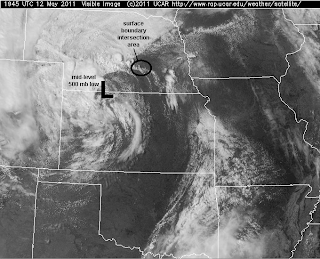 Two weak tornadoes in Nebraska were the first I've intercepted on a "cold-core" storm chase in 5 years, and the first cold-core tornadoes my wife Shawna has seen. Cold-core systems are closed mid-level lows (at around the 500 mb level) that are pools of very cold air aloft, with just enough low-level moisture below them flowing in from the southeast to make the atmosphere notably unstable, although the surface moisture (dew points in the low to mid 50s F) may not appear all that impressive for tornadoes. This event was interesting in that it featured both a landspout tornado near Aurora NE, and a brief supercell tornado near Stromsburg NE.

The surface map and satellite image above at mid-afternoon on Thursday showed a fairly typical cold-core setup (see this paper and this paper for more information about cold-core systems and tornadoes), with a surface low in south-central Nebraska just northeast of the mid-level low, and a boundary intersection area northeast of the surface low in the Grand Island-Aurora-York NE area. This boundary intersection area is often a favored location for tornado development, with a surface heat axis typically protruding in from the south for localized instability enhancement, and low-level shear and helicity often maximized in this area east or northeast of the surface low.

The landspout occurred on a sharp dryline boundary visible on radar as a blue fine line (see third image above) near the boundary intersection area, via non-supercell/non-mesocyclone processes (see this paper). A high-based cell that developed and stetched vorticity on this boundary around 2130 UTC produced a sharp condensation funnel well above ground around 2150 UTC (4:50 pm CDT) that eventually made contact with the surface (see my photos above) with a dust column visible.

A later brief tornado (see last image above) developed with a supercell and mesocyclone featuring much lower cloud bases and cooler surface temperatures farther northeast near Stromsburg around 2340 UTC (6:40 pm CDT) as the boundary intersection area and midlevel cold core system worked eastward. Video of this tornado by Dustin Wilcox can also be found here. This supercell was interesting in that the inflow temperatures were only around 60 F, and the cell structure was rotated 90 degrees counter-clockwise (inflow coming in from the north rather than the east, and the flanking line extending eastward instead of southward from the cell). This made for some spotting confusion at times as cell elements moved northwestward in upper flow ahead of the mid-level low, while new right flank development and eastward evolution of the surface boundary intersection area caused some eastward movement.

NWS Hastings also has some information about the 5/12/11 events here. Thankfully, most tornadoes with cold-core systems are relatively weak (EF0 and EF1) in intensity, as was the case on Thursday with little or no damage reported.

Tornadoes with cold-core systems are rather difficult to intercept, because if there are several cells in the boundary intersection area east or northeast of the surface low, it is hard to know which cell to follow and observe. There are also many issues that can keep cold core systems from producing tornadoes. For example, this same system the prior day on Wednesday produced supercells in northeast Colorado and northwest Kansas, but there were no tornadoes because all cells were occurring north of a sharp stationary boundary where the surface air (40s and low 50s F) was too cold for tornado development.

Computer models are suggesting that yet another cold core system will affect the central plains around the period 5/18/11-5/20/11.

First chase going after cells moving NNW.Chased this event and nice to see a great explanation of this unique day.

Great write-up. Would be interested in your thoughts on what I saw here:
photo 1, and photo 2.

This is looking toward Ravenna from 3 miles east of Wood River at approx. 3:50 PM. See photo description for more info. Surface winds are strong from the NE (to coming from the photo's right). A line of extremely low clouds partly obscures the objects bottom and curve around to the SW out of this storm's base (wish I had taken a panorama).

I also saw a cold air funnel about 10 minutes later (not photographed) from a lowering not associated with this (photographed) storm complex, but out of a line of convection that curved out of this storm system back to the SE towards the low. It was long and narrow, and short lived... though the lowering it came out of lived on and was approaching Cairo, NE as I drove into that town from the south.