Saturday's  EF3 tornado in Columbus, Mississippi (see above) caused the first tornado fatality of 2019 along with several injuries around 5:15 pm CST.  A tornado warning was issued for Columbus roughly 20 minutes prior to the tornado striking town, which likely helped save additional lives.

Farther north, another tornado (EF2, below) hit the west side of Burnsville in the northeast corner of Mississippi, with thankfully no injuries reported: 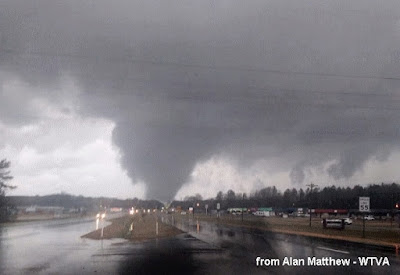 The setting was well-forecast on SPC outlooks (not shown), and involved an afternoon warm front over central Alabama into northeast Mississippi (see below on College of DuPage surface analysis): 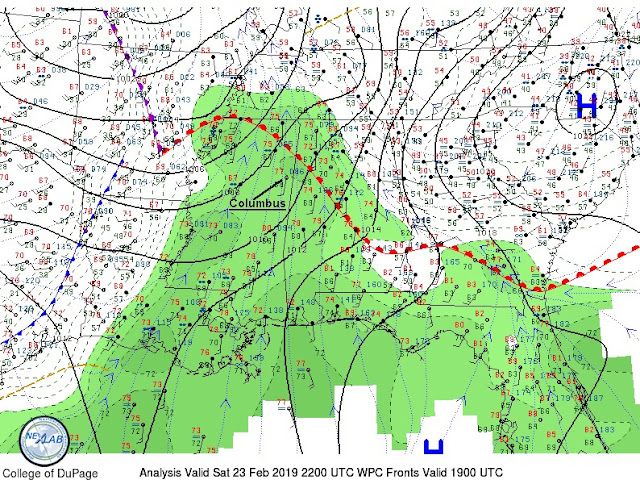 An environment with larger low-level wind shear (0-1 km storm-relative helicity, or SRH, > 300 m2/s2) along and just south of the warm front coincided with sizable CAPE (> 1500 J/kg) over east-central and northeast MS (see HRRR model forecasts below).  This made for a setting supportive of strong supercell tornadoes in the area indicated: 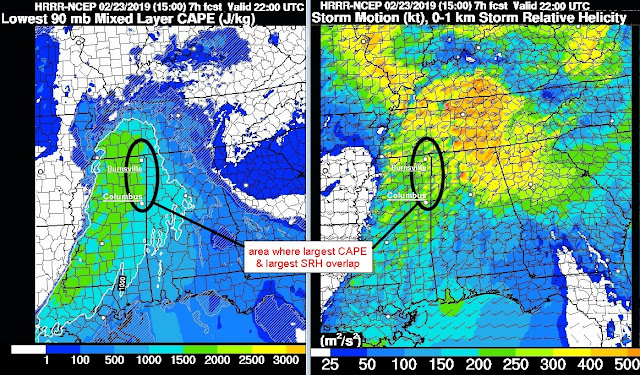 The radar reflectivity image below shows the tornadic cells around 4:40 pm CST, about 35 minutes before Columbus was hit: As with so many tornadoes in the Dixie states, the Columbus tornadic storm was embedded in a line of storms, which made it hard to see the tornado at times.

The larger-scale setting showed a large trough at 500 mb (roughly 18,000 ft above sea level) plowing through the central U.S.  (A cold-core system was over Kansas, but there wasn't enough CAPE for more than one or two marginal severe reports in western Missouri, not shown.)  Notice the position of the southern branch of the jet stream (thick white line and arrow), with the tornadoes occurring just north or left of that axis, similar to some other tornado episodes I documented on this blog back in early 2018: 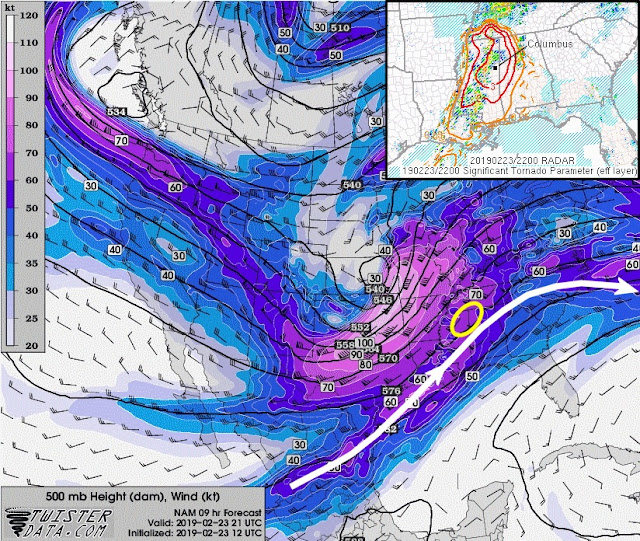 The tornadoes also coincided with an area of large significant tornado parameter values (STP, see inset above) over east-central and northeast MS just north of the southern jet branch at 500 mb, similar to the HRRR forecast of enhanced SRH and CAPE shown earlier.

One other point of interest... Tracks/swaths of model forecast storm rotation (called updraft helicity) are a sophisticated tool from the detailed HRRR model used by many forecasters to anticipate supercell likelihood, and by association, possible tornadoes.  Shown below are the accumulated updraft helicity tracks forecast during the day on 2/23/19 by the HRRR model from the ESRL site at mid-morning, the left image showing forecast rotation tracks in the 0-2 km layer above ground, and the right image showing the same for the 2-5 km layer higher up: 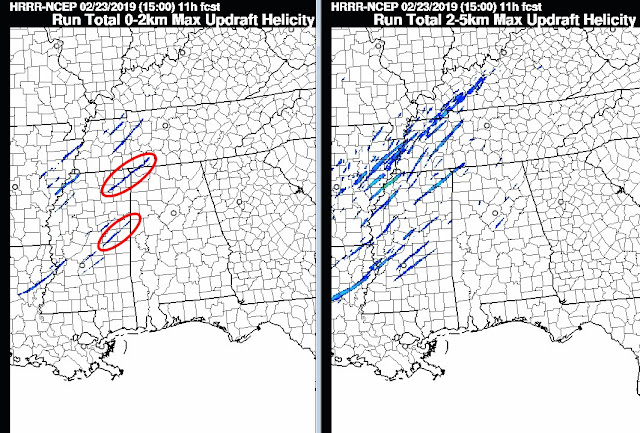 Note that the lowest level (0-2 km) updraft helicity tracks are fewer, and appeared to roughly "forecast" the Columbus and Burnsville tornadic supercell tracks (red ellipses).  Although I'm not a fan of using updraft helicity forecasts as a surrogate for the possibility of tornadoes (such forecasts need to be combined with a careful assessment of environment), it is interesting that this case suggests that the lowest level 0-2 km layer product may in a loose sense be more useful in "picking out" some likelihood of tornadoes by reducing the "over-forecasting" of rotation tracks often seen in the 2-5 km layer product.  Just a subjective observation.

Posted by Jon Davies at 8:05 AM No comments: 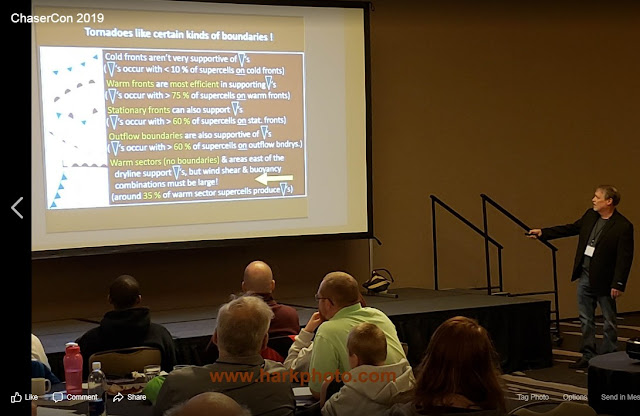 ChaserCon 2019 in Wichita, Kansas this past weekend was well-attended, and Shawna and I had a great time talking to so many storm chasers and severe weather enthusiasts!  Thank you to all the convention attendees who stuck around on Sunday, Feb. 10 for my class, and thanks for all the great questions, supportive comments, and big enthusiasm about learning how to forecast!

For those interested, I put up my Powerpoint slides from the class at: 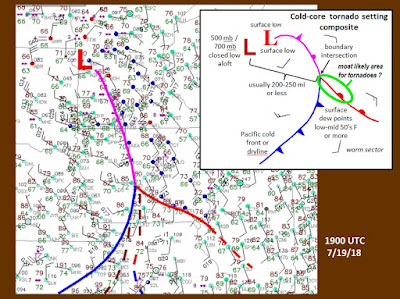 I've also had a surprising number of requests for a DVD presentation on tornado forecasting, similar to my class.  That is definitely something I'll work on in the near future, so stay tuned.  But also be patient, as I have quite a few committments going right now.

One other subject...  My wife Shawna's excellent 30 minute video "Surviving the Storm: What Chasers Want You to Know" is now on YouTube FREE of charge: 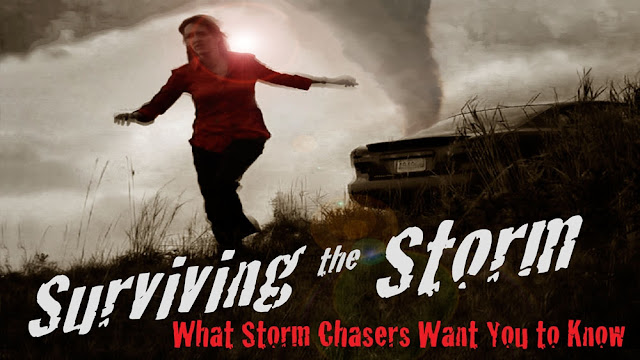 This exciting presentation details everything your loved ones and friends need to know about staying safe from a wide variety of severe weather threats.

We can "Pay Forward" our passion about storms (as Shawna has done with this outstanding video) by sharing our knowledge about staying safe when severe weather threatens through talks to community groups, neighborhood home owners and apartment associations, church groups, schools, etc.  This video (no cost!) is a great tool around which to build a severe weather safety talk, if you have an interest in doing that sort of thing.

So please use it and spread the word!  Thanks...

Posted by Jon Davies at 8:29 AM No comments: