Been really busy lately, so no posts or cases studies in the past couple weeks. If I get time, I'll see if I can do a post and quick study of the setting that spawned the tornado just west of Kansas City last Saturday (April 25), so stay tuned. Of course, I was in Oklahoma on my 2nd storm chase of the season that day. Ouch.

I'll be doing a talk this evening, "Busts, Thrills, and Things Learned from Storm Chasing" for the Kansas City AMS chapter at Cupini's restaurant in Westport around 7:30 p.m. Looking forward to seeing some fellow meteorologists and storm enthusiasts there. 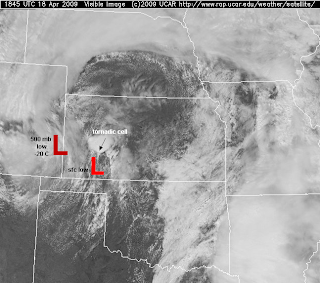 Shawna and I have had quite a lot of difficult family stuff going on, so I haven't posted lately. But it has certainly been an early spring season of midlevel cut-off lows and cold core systems so far, most of which have failed to produce tornadoes.

For example, way back on 2/9/09, a large dynamic cold core system raced northeast through the plains, but overwhelmed any semblance of a surface pattern that might support tornadoes due to a dry slot that blasted northeast at 70 mph, a typical problem with very early season cold core systems. Then in early April, a fairly organized system on 4/4/09 lifted through Nebraska, but could only produce brief gustnado-like vortices with storms because of dew points only in the 40's F and rather high cloud bases (usually not supportive of cold core system tornadoes). A few days later on 4/9/09, a strong cold core system in northern Oklahoma and Kansas again was "too dynamic" when the surface low jumped and reformed farther east, destroying the surface pattern focus beneath and near the midlevel low. The resulting large area of convection that developed tended to overwhelm the surface pattern and effective boundary intersections that are often important for tornadic cells in cold core cases, though there were strong tornadoes later that night in Arkansas and Louisiana within the broader warm sector farther to the southeast.

Yesterday (Saturday 4/18/09) finally saw a cold core system that produced several tornadoes over a 90 minute period that were well photographed in southwest Kansas, northwest of Dodge City (see photos above). There was some damage east of the tiny town of Kalvesta, but thankfully no injuries. Being that this was a slow-moving system that was not overly "dynamic", surface features were able to focus near Dodge City, and an initial storm that developed was able to stay isolated for a long period near the midlevel low and cold air aloft and the surface boundary intersection, rather than being overwhelmed by a large area of convection.

I watched this event develop from Kansas City (I really miss living in central KS!), and noticed the surface pattern at late morning was focusing over southwest Kansas (see 2nd graphic above) near a surface low and boundary intersection west and south of Dodge City. The 500 mb closed low aloft was not far to the west-northwest, near the Colorado border (see positions marked on satellite image, 3rd image above), with plenty of cold air aloft and temperatures near -20 C at 500 mb, and -5 C at 700 mb. (See here for more on cold core tornado settings.) Put that cold air above surface dew points around 50 F advecting northwestward into the high plains, and you have a recipe for strong stretching in isolated storm updrafts below 10,000 ft or 3 km. The tight spin/vorticity/forcing of the nearby midlevel low probably helped as well.

Surface convergence at 1:00 p.m. CDT (see 18 UTC SPC maps, 4th graphic above) was maximized near the surface low and dryline/warm front intersection near Dodge City, Surface-based CAPE was also plentiful for a cold core setting (> 1000 J/kg, see SPC map). The supercell developed rapidly between Dodge City and Garden City between 12:30 p.m. and 1:00 p.m. CDT (not shown), and the first tornado developed barely 20 minutes into the storm's lifetime. Such rapid tornado development relative to storm initiation is not uncommon with cold core settings, probably due to the majority of CAPE being located below 500 mb (relatively close to the ground, see the final graphic above, a RUC analysis/estimation at Dodge City during the tornadoes).

It is interesting to note from the RUC profile above that there was very little if any low-level shear (storm-relative helicity or SRH) in the local environment, reiterating the fact that cold core tornado events near the midlevel low don't always require lots of helicity. Limited low-level shear and the surface focus near a reasonably well-defined boundary intersection seemed to suffice in this case.