Do we warn too much? Some thoughts on tornado warnings in this tragic year of tornado deaths... 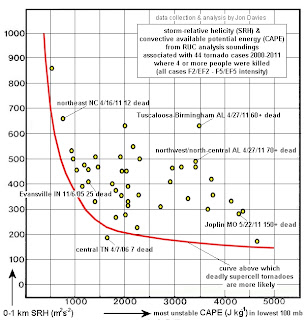 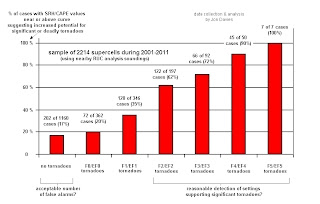 It's been 2 months since the horrifying Joplin tornado (death toll now 159), and 3 months since the shockingly deadly tornado outbreak in the Dixie states that killed well over 300 people. It now looks like 2011 will be the 4th deadliest U.S. tornado year on record. I don't think most people have any idea how jaw-dropping that is... one has to go way back before a coordinated tornado warning system was in place to find annual tornado death tolls of that magnitude!

When big tornadoes hit cities, there will be deaths. And there have been many large long track tornadoes this year in populated places. But the staggering death tolls this year also raise some questions, including these: Are people getting complacent regarding severe weather preparedness? And do we now warn so much that warnings sometimes fall on deaf ears? A respected nurse at one of the hospitals in Joplin told me, "We get warnings and sirens all the time... we're, like, tone deaf... it's hard to take them seriously." I've heard many similar comments from other people. Severe weather education is a never-ending task that requires continued attention and priority, and getting people to listen and take action is deeply rooted in social science rather than meteorology.

It is noteworthy that, compared to the 1980s, the number of tornado warnings in some parts of the U.S. (such as the Southeastern states) has increased at least seven or eight-fold, according to a recent article in the Birmingham News, while false alarms are averaging close to 80%. I know of no concrete social studies that have examined "warning fatigue" regarding tornadoes and severe weather. Yet I do agree with respected Birmingham TV meteorologist James Spann's recent comments that have stirred some controversy.

I continue to see a number of tornado warnings issued in marginal settings where, based on years of data and increased operational knowledge about tornado environments, the atmosphere can only support, at best, weak or brief tornadoes. In those cases, the threat is considerably less compared to days like the Joplin tornado event this year, and the Dixie Super Outbreak. Yet it is often difficult to discern the relative degree of threat or risk in the text of many warnings, whether read verbatim or presented via media such as television. I know that the National Weather Service (NWS) and television/media meteorologists have a sincere desire to save lives and have the public know about all weather threats. Yet I wonder if we shouldn't reaffirm that we can't warn or cover all severe weather events. Instead, shouldn't we make a stronger effort to emphasize warnings in those weather settings that clearly have potential to be truly dangerous to many people in populated areas? I'm no expert in social science, but with my background in severe weather research, here are some comments from a meteorological perspective.

The first graphic above shows combinations of low-level wind shear (storm-relative helicity or SRH) and instability (CAPE, or convective available potential energy). On the most simplistic/basic level, these are the most important environment ingredients linked to supercell tornadoes based on research over the past 25 years. On this graphic, I've plotted estimated SRH/CAPE points (using nearby RUC model analysis soundings) for 44 tornadoes that were associated with 4 or more deaths over the past 11 years. I've also drawn in a curve suggesting a rough lower "limit" to SRH/CAPE combinations that generally support tornadoes that can kill larger numbers of people; note that all events but one (98%) fell above this curve.

Looking now at a much larger database (2214 supercell soundings I've collected over the past 11 years, 90% associated with NWS tornado warnings), the 2nd graphic above shows the percent and number of both non-tornadic and tornadic supercells (tornadoes shown by EF-scale intensity) falling near and above the red curve in the first graphic, suggesting more favorable SRH/CAPE combinations for strong/violent tornadoes. Notice that, using the discriminating curve suggested by the first diagram, only 17% of the non-tornadic supercells were "false alarms", falling near or above the curve but not producing any tornadoes. But moving over to significant tornadoes (EF2-EF5), notice that increasing majorities of these supercells fell into the more "favorable" area above the curve. Using only this simplistic SRH/CAPE scheme in supercell settings, this suggests workable false alarm and detection rates for supercell tornadoes, not even considering other ingredients such as deep-layer shear, cloud base height, amount of convective inhibition, storm motion relative to surface boundaries, etc., that have been found relevant in tornado forecasting research.

This isn't really new information; forecasters at SPC have used SRH and CAPE combinations along with forecasts of other ingredients for years now when generating outlooks and watches for tornadoes. However, tornado environment ingredients seem to be used less consistently when actual tornado warnings are considered. This is supported by the first column of the 2nd graphic above, where tornado warnings (not shown) were issued for 984 of 1160 non-tornadic supercells, yet the SRH/CAPE environment for 83% of these cases fell below the red curve in the first graphic above. Certainly, supercells in SRH/CAPE environments below the red curve do produce tornadoes, but when they occur, the large majority (80-85% according to my database) are weak (EF0-EF1 intensity). When thunderstorms form and become supercells, it is the environment area above the red curve where the probability of deadly tornadoes increases dramatically.

My point is this: Shouldn't we place a much stronger emphasis on radar-based tornado warnings issued in settings where SRH and CAPE are in the area near and above the red curve in the first graphic above, even prior to confirmed spotter sightings?

There are a variety of ways to work toward this, including better environment awareness by meteorologists (the SPC mesoanalysis page is a great tool in this regard) when issuing and presenting warnings, stronger wording and importance placed on warnings when environments are in the enhanced SRH/CAPE area, and making the public more aware that there are different levels of danger in weather settings.

I know that many of my colleagues in the NWS work hard to incorporate environment information into tornado warning decisions, and that there are many times when it is very difficult to know when to hold back from issuing a warning, or to go ahead and "push the red button". Also, I know that meteorologists in today's media intensive society don't usually get rewarded for not warning in a marginal situation and avoiding a false alarm, but they are ruthlessly scrutinized when a notable severe weather event is missed. I'm not suggesting that we don't warn in marginal situations where tornadoes can still produce isolated damage and threat. I am saying, let's make sure to put the strongest emphasis on warnings in environments where ingredients appear more optimum for stronger supercell tornadoes, and try to be more clear about that to the public.

A 2-tier warning system that would use an enhanced danger "red flag" in larger SRH/CAPE combination situations would certainly be a more radical solution, and require more public education. But this could help hospitals, factories, and public venues make more informed decisions regarding costly labor-intensive sheltering in the more dangerous situations, and possibly reduce apathy from "false alarms". It also might help emergency managers make more informed decisions regarding the use of sirens, maybe running them longer and more consistently in "red flag" situations, or using different siren tones to catch people's attention.

Several of my colleagues have told me the above would be unworkable, and even confusing to the general public. That may be. But I do feel strongly that we can do more to help the public recognize warning situations that clearly have greater danger affecting more people. I can't avoid a strong sense that, with all the information and knowledge available to meteorologists today, we can do a better job conveying true tornado threats to the public and reducing false alarm perceptions that can engender public apathy. I think this is worth at least a look in this tragic year of tornado deaths.

In a future post, I'll discuss some recent example cases that relate to the above discussion.