A surprise photogenic tornado in southwest South Dakota on June 29, 2019 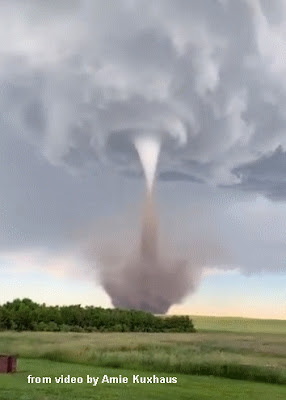 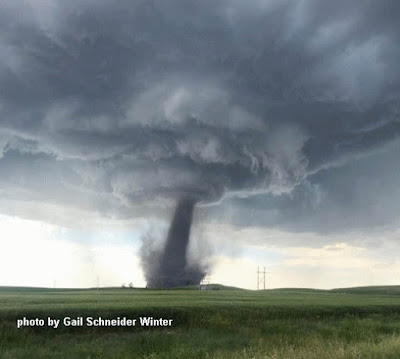 Similar to the unexpected and stunning Laramie tornado last year (see here), June 29 saw a striking and widely-photogrpahed tornado (photos above) that lasted around 40 minutes west of Martin, South Dakota.  It occurred mainly over open fields, and so was rated only EF1, although it may have been more intense.

The Storm Prediction Center (SPC) had outlooked a 5-10 % chance of tornadoes over parts of North Dakota on Saturday, but nothing over southwest South Dakota (SD).  Why?  The reason is that this tornadic storm was not a typical tornadic supercell storm, and like the Laramie tornado, was difficult if not impossible to forecast.

Looking back at Saturday afternoon June 29, there were certainly doubts about whether storms would even develop over SD - see the model radar simulation forecasts for mid-afternoon below: 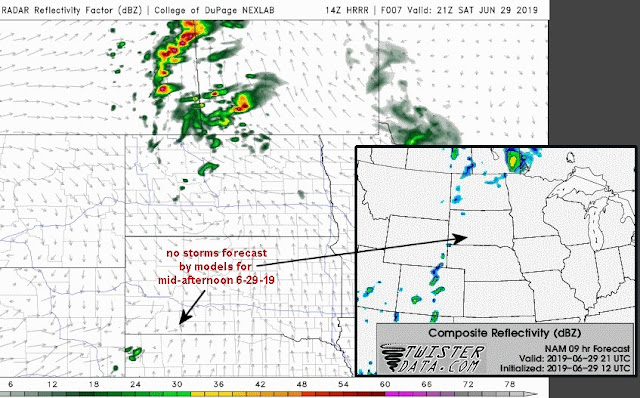 Given these model radar forecasts and very high cloud bases expected (around 2500-3000 meters above ground, not shown) along with little if any low-level wind shear, no forecaster would anticipate a long-lived tornado hours in advance within such a setting.  Tornadoes from purely supercell processes typically occur with cloud bases under 1500 m and at least some low-level wind shear; it is unusual for tornadoes to occur when temperatures are near 100 deg F, which guarantees high cloud bases.

How could such an environment support a long-lived tornado?  Some important ingredients can be seen coming together just before the tornado occurred.

Here's the surface map at 3:00 pm CDT, roughly 30 minutes before the tornado.  Notice the northeast-southwest boundary/trough over southwest South Dakota: 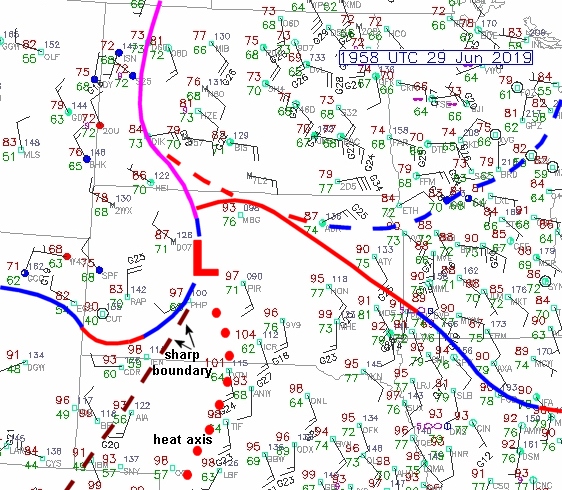 A storm or two did begin to form on this boundary shortly before 3:00 pm CDT (see satellite image below) with strong surface forcing and convergence on the boundary.  The very hot temperatures (around 100 deg F, see heat axis on map above) also helped to break through a stout layer of warm air aloft (700 mb temperatures > 14 deg C, not shown) to initate a storm. 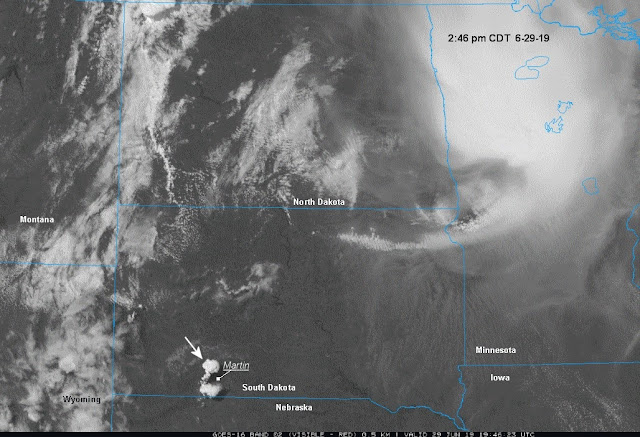 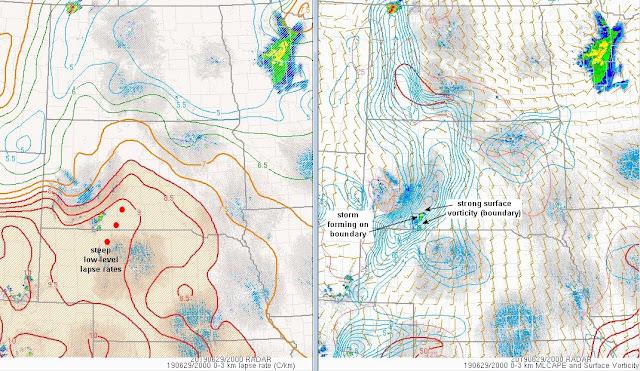 This combination of strong low-level lapse rates and vorticity (slowly "spinning" air) along the boundary apparently set the stage for rapid vertical stretching beneath any storm updraft that could form and establish itself directly over the sharp boundary.

Typical supercell tornadoes require significant low-level wind shear (a rapid change in wind speed and direction with height) in the lowest 1 or 2 km.  But this was definitely not a typical case, as there was very little low-level wind shear (storm-relative helicity, or SRH) over southwest SD on SPC mesoanalysis graphics at 3:00 pm CDT: 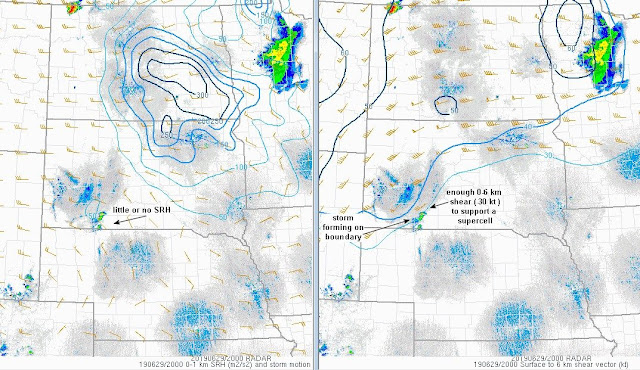 However, the storm updraft essentially "locked on" to the sharp wind shift boundary to provide the necessary vorticity ("spin") to stretch vertically into a tornado, in lieu of significant SRH/low-level wind shear (again, note the large surface vorticity along the boundary on the earlier SPC graphic).

In the 2nd panel of the graphic immediately above, also notice that there was just enough deep-layer vertical wind shear (25-30 kt) to support a supercell storm.  So, instead of only brief updraft stretching from steep lapse rates along a boundary, the storm became more organized and long-lived through interacting with this deep-layer shear.  Indeed, it took on supercell characteristics with a hook-shaped echo and clear rotation detectible from a distance on radar (see radar inset below): 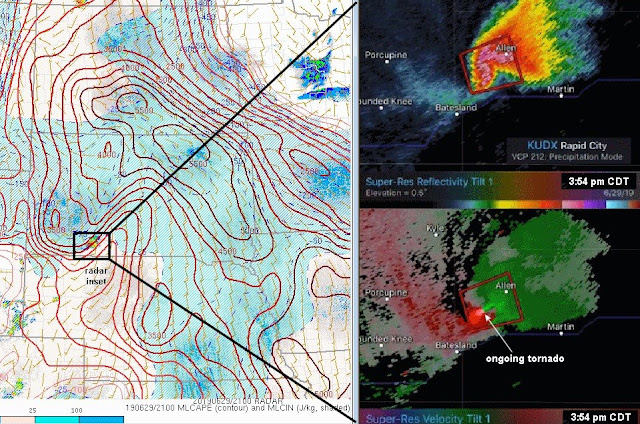 Thus, the tornado was able to keep going for quite awhile.  With the contribution of non-supercell processes (stretching of boundary vorticity in a steep lapse rate setting) and not a lot of rain falling from the storm (see photos at top), the high cloud bases and potential evaporative cooling did not seem to be a negative factor.  The tornado was also quite visible from a distance due to these same high cloud bases.

Because this setting combined both non-supercell ("landspout") processes with supercell characteristics, I would call this a "hybrid" tornado event.  WIthout the boundary and the storm directly linked to it, the tornado probably would not have occurred in the absence of notable SRH.  But with enough deep-layer shear to support a supercell, that was also part of the "recipe".

Farther north (not shown), tornadoes were expected over North Dakota on June 29, bur did not occur.   This was probably due in part to the slight cooling influence of an outflow boundary from morning storms.   Without as much surface heating, a strong layer of warm air aloft (temperatures around 14 deg C at roughly 10,000 ft MSL) helped to "snuff out" evening storms that managed to form over south-central North Dakota before they could really mature and take advantage of increasing low-level shear/SRH as nighttime approached.

Believe it or not, another tornado from processes similar to those on Saturday formed again on Sunday afternoon (June 30) over south-central South Dakota near the town of Burke, along yet another sharp boundary with strong heating and ingredients lining up enough to support a tornado: 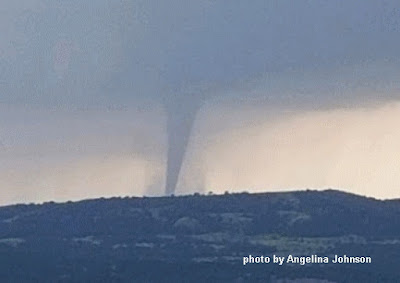 But to reiterate, such tornadoes are almost impossible to forecast hours in advance because everything has to come together just right, and typical supercell tornado forecasting factors (such as SRH and lower LCL heights) don't work with these type of "hybrid" tornadoes.  Yet when the proper ingredients do come together, these "hybrid" tornadoes can be quite spectcular visually!