Tornadoes in Kansas in mid-August! 8/15/19 in northeast Kansas 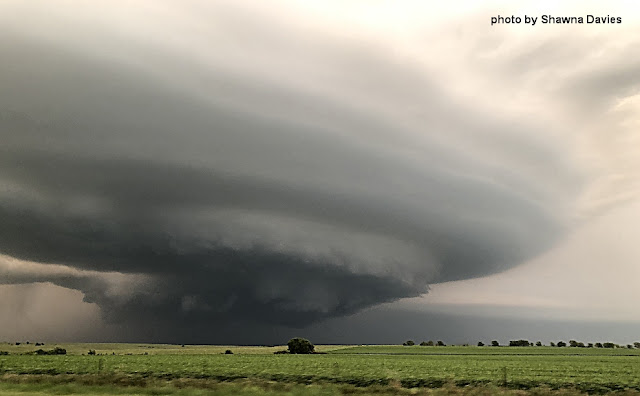 Supercell tornadoes undoubtedly can occur in Kansas in early to mid-August, but they don't happen that often, and even as a native Kansan, I've never seen one.  That changed on Thursday, August 15 when a well-established supercell (see Shawna's photo above) in northwest flow produced tornadoes southeast of Manhattan and southwest of Topeka.

Here's a map showing the approximate location of three tornadoes that occurred with the supercell pictured above in the 7:00-9:00 pm CDT time frame: 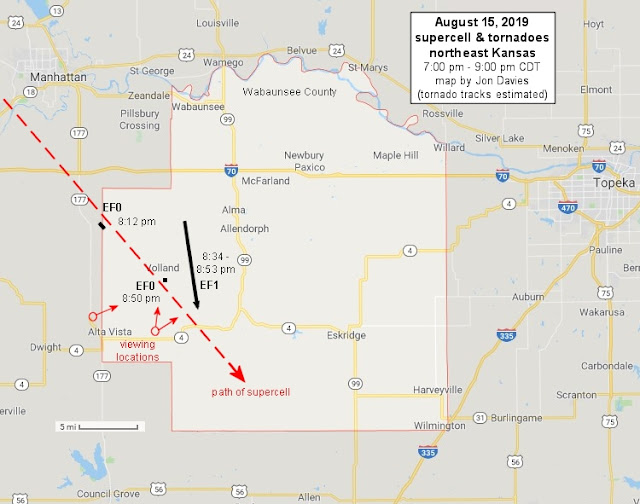 (A fourth brief tornado occurred with a separate trailing supercell after 9:00 pm CDT.)

I was chasing with James Skivers and my wife, following the southernmost supercell that developed northwest of Manhattan and moved sharply southeast across Wabaunsee County, Kansas (KS).  We missed the first brief tornado (EF0) from this supercell near the western Wabaunsee County line south of I-70 around 8:12 pm CDT when we were driving south to stay ahead of the storm through a low area with trees.  Here's Brian Miner's cool photo of the full supercell base and this first tornado, all in the same shot: 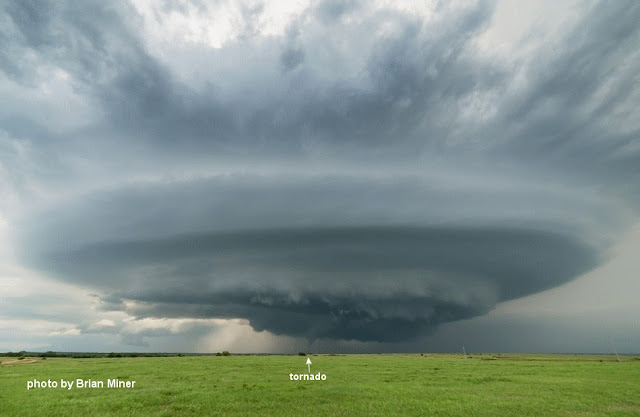 The second tornado (rated EF1 by Topeka NWS) was longer-tracked near dark, southwest of Alma, KS and northeast of Alta Vista.  The image of this tornado below is from Shawna's video, backlit by lightning looking east-northeast, with the rear-flank downdraft (RFD) and gust front visible: 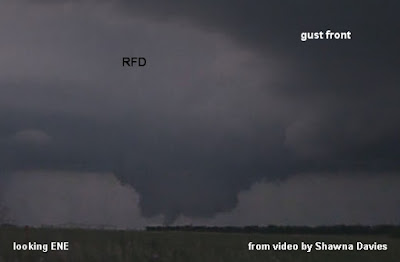 A third brief tornado (EF0, below, looking north and also backlit by lightning) occurred near the time the second tornado was ending, back to its northwest under an occluded mesocyclone behind the one that generated the EF1 tornado: 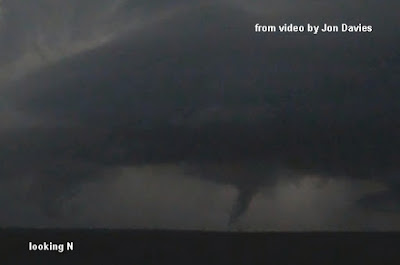 A separate supercell back farther to the northwest produced a brief EF0 tornado after 9:00 pm CDT east of Alta Vista (not shown). 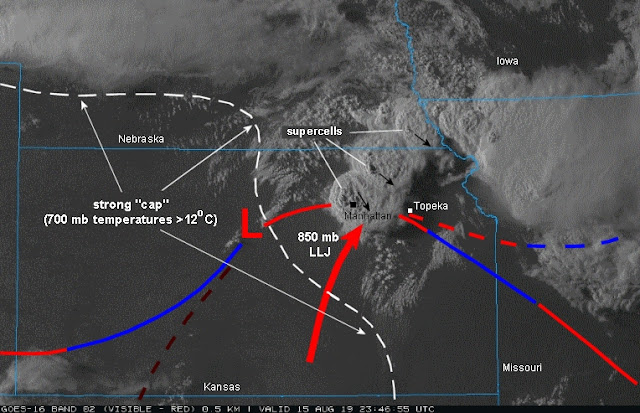 Note the stationary front and outflow boundary (from earlier storms that moved into northern Missouri) close together over northeast Kansas near Manhattan and Topeka. Winds from the low-level jet (LLJ, around 850 mb or 5000 ft MSL) were impinging on and overrunning these boundaries, helping to initiate storms northeast of a "cap" that was inhibiting convection to the southwest.

Three different supercells are visible in the image above (black arrows show their southeastward motion), but only the southernmost cell near Manhattan was able to access the most unstable air along and south of the boundaries by virtue of its location and motion, probably a big factor in its ability to produce tornadoes about 90 minutes after the time of the satellite image.  The low-level jet was also increasing near dark, as is typical, enhancing low-level shear supportive of tornadoes.

The SPC mesoanalysis depiction of the effective-layer significant tornado parameter (STP) at 8:00 pm CDT (shortly before the tornadoes) showed large values supportive of tornadoes along and near the aforementioned boundaries in northeast Kansas (the enhanced energy-helicity index, an experimental parameter, is also shown): 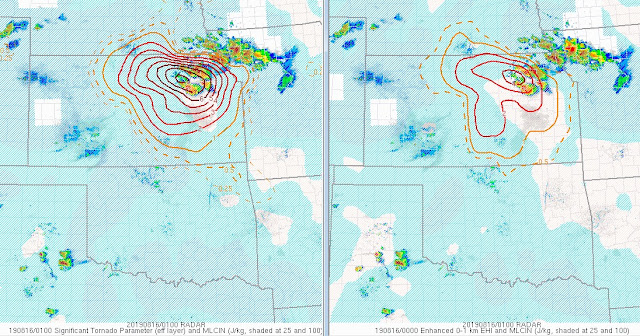 Notice that, even though these tornado forecasting parameters appeared "favorable" over a rather large area extending north of the boundaries, the tornadoes were limited to the air mass south of and near the boundaries.  This suggests the importance of following the location and evolution of relevant boundaries in forecasting/nowcasting tornado potential, rather than just relying on parameter "bulls-eyes".

Also, here's the NAM model 500 mb forecast (winds at roughly 18,000 ft MSL) showing the northwest flow driving into Kansas, a little unusual that far south in mid-August, and the reason the supercells moved southeastward to the right of the midlevel flow: 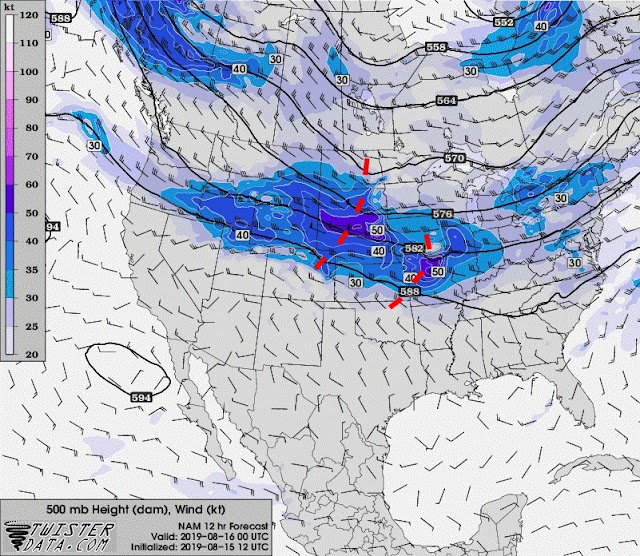 Two shortwave troughs are marked on the forecast above (thick dashed red lines) showing a lead shortwave associated with the morning and early afternoon storms that moved from northeast Kansas into northern Missouri, and a fairly strong trailing shortwave not far behind crossing Nebraska.  Often, morning and early afternoon storms leave subsidence (sinking motion) and a "worked-over" air mass in their wake, reducing the chances of severe storms behind them.  But that was not the case here, with another shortwave immediately behind generating upward motion and intensifying low-level winds converging on and overrunning the surface boundaries.

All in all, an extremely interesting case for mid-August in Kansas! 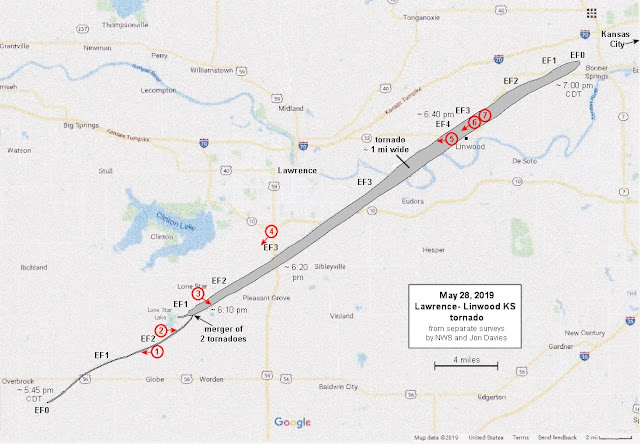 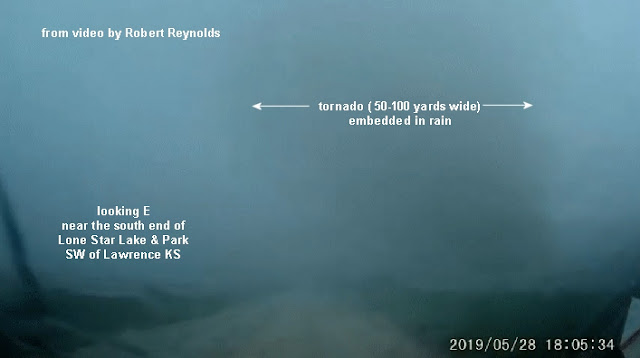 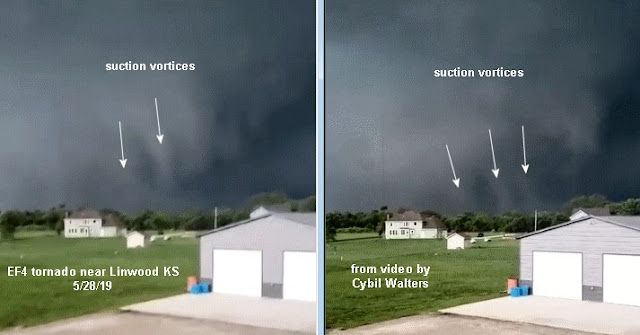