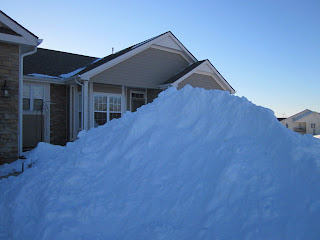 The big storm on Feb. 1st that affected much of the central U.S. and Midwest with blizzard conditions and massive snow (see photo above of snow shoveling pile at my house N of Kansas City) was quite a news maker, with several deaths blamed on the dangerous conditions. Often, such strong winter systems (in this case, an intense negative tilt wave moving northeastward out of a large trough, see 500 mb chart above) plow up enough moisture, wind shear and lift to generate an outbreak of tornadoes somewhere in the southern U.S. near the Gulf coast. I heard meteorologists on TV mention the "T" word as a possiblilty in the Deep South several times as this storm intensified. But so far, only 3 weak/brief tornadoes have been reported where several tornado watches were issued. Why the lack of tornadoes on the south end of this intense system?

Using Mobile AL as a spot check location with scattered storms approaching at mid afternoon on Feb. 1st (see 3rd graphic above showing radar and tornado watch in the Mobile area), I saved some RUC analysis soundings at 2000 UTC (2 p.m. CST), using several different parcel lifts (see skewT plots on 4th graphic above). Even though low-level wind shear and storm-relative helicity (SRH) was quite large and seemingly favorable for tornadoes, notice that low-level lifted air parcels from both surface and 1 km above ground showed little if any instability/CAPE (red hatching), and lots of convective inhibition (CIN, green hatching). The most unstable lifted parcel was found well above ground at 2 km (CAPE > 700 J/kg), so that was where the true instability fueling the storms was coming from. In other words, the environment along the Gulf coast appeared mostly _elevated_ in nature, with little instability to be found from air lifted near the ground. This was confirmed by the SPC mesoanalysis at 20 UTC (last graphic above), showing SBCAPE and lowest 1 km MLCAPE to be confined offshore out in the Gulf.

Its been a cold January 2011 with repeated intrusions of Arctic air penetrating southward to the Gulf and cooling the boundary-layer and surface waters. So maybe it's not a surprise that this strong system was unable to pull adequate instability northward at the _surface_ to support tornadoes. Another problem on Feb. 1st was the convective mode, which was largely linear or clumped into complex structures, rather than discrete cells (see radar in 3rd graphic above). Both these factors probably combined to limit the tornado potential. However, with the very strong low-level and deep layer wind shear present (see the Mobile AL hodograph above), it would be remiss for SPC to not alert the public to the possibility of tornadoes via watches, as small increases in CAPE near the coast not forecast by computer models might help support brief tornadoes. Small CAPE/large shear situations near the Gulf coast are often very difficult for forecasters to assess regarding tornado potential, as subtle changes in the low-level moisture profile can make significant differences in the environment.