Florence spawns a killer tornado near Richmond, Virginia on 9/17/18 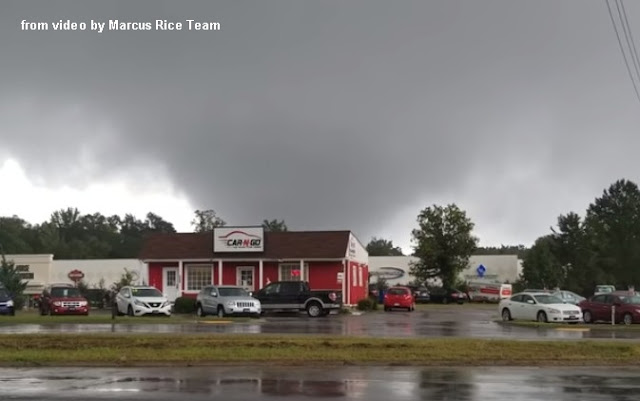 Anyone following the news the past week knows that Florence was a devastating hurricane in North Carolina (NC), South Carolina (SC), and Virginia (VA), with at least 37 deaths so far.  The Carolinas deaths were mainly flood-related due to Florence's slow movement and deluge of rain, and with such a large and wet tropical system, tornadoes were probably the least of most people's worries.  But tornadoes did occur, particularly on Monday the 17th when one person died in a tornado that hit the Richmond, Virginia area (see above).

There were around 100 tornado warnings issued during Florence and her remnant's slow journey inland from Thursday 9/13/18 through Monday 9/17/18.  Yet the 17th turned out to be the only truly significant tornado day of Florence's 5-day assault on the mid-Atlantic states.  After my last post about tornadoes from the remnants of Gordon on September 8, I thought it would be interesting to look at possible reasons why the strongest and longest track tornadoes were on the 17th, several days after Florence's landfall.

The inland track of the center of Florence and her remnants from Friday 9/15/18 through Monday evening 9/17/15 is shown below, with times marked: 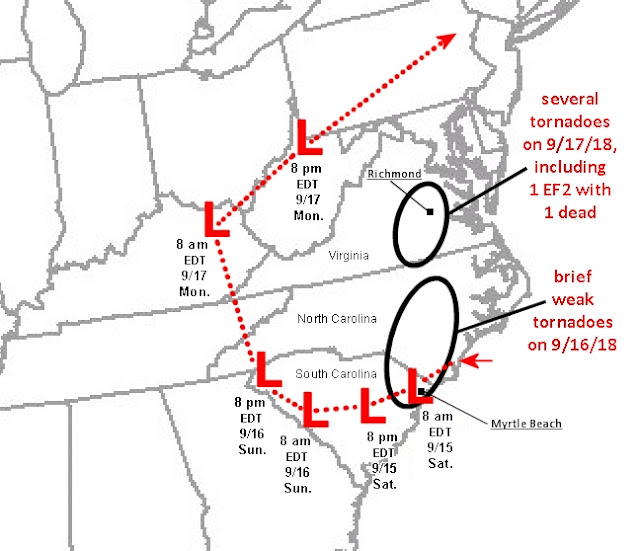 A few reports of brief weak tornadoes began coming in on the evening of the 15th near Wilmington NC, but the most tornadoes associated with Florence occurred on the 16th (brief and weak), and on the 17th (stronger and longer-lived), as indicated on the graphic above.  But again, why was Monday the 17th the most prolific tornado day?

First, from classic research on hurricane tornadoes, such as McCaul's August 1991 paper, the strongest and most numerous tornadoes with tropical systems are most likely in their right front quadrant (looking downwind along the direction of movement).  More recent studies, such as Verbout et al. (2006) also suggest that tropical systems recurving to the northeast inland over the eastern U.S. are more likely to produce tornadoes.

Such recurvature is usually due to tropical systems meeting and merging with westerly or southwesterly flow from a mid or upper level trough as the remnants move northward (this can increase the surrounding deep-layer wind shear to better support supercells and possible tornadoes -- more on than later).  It is interesting that Florence's remnants did indeed merge with such a trough, as seen on the 500mb charts below (roughly 18,000 ft above sea level) for both 9/16/18 and 9/17/18: 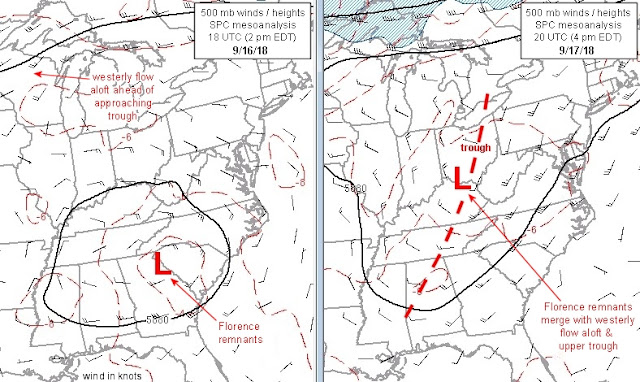 From our tracking chart earlier, notice that Florence's center by daytime on the 17th was moving faster and actually curving back to the northeast, a result of it merging with the westerly flow aloft and the 500mb trough.  Even though Florence's remnants were more spread out at this point, this change in movement and direction still put Virginia in the right front quadrant of the remaining tropical system center on Monday the 17th, a favored location for tornadoes from the research noted earlier.  It is notable that the Virginia tornadoes occurred during the period of Florence's remnants recurving northeastward on the 17th.

Second, looking at tornado forecasting parameters from the Storm Prediction Center (SPC) mesoanalysis, the environment associated with Florence's remnants over land appeared most favorable over Virginia on the afternoon of the 17th, particularly when compared to the 16th.  This can be seen from the Enhanced Energy-Helicity Index (EEHI) parameter, which combines low-level wind shear and instability (important supportive factors for supercell tornadoes), shown below: 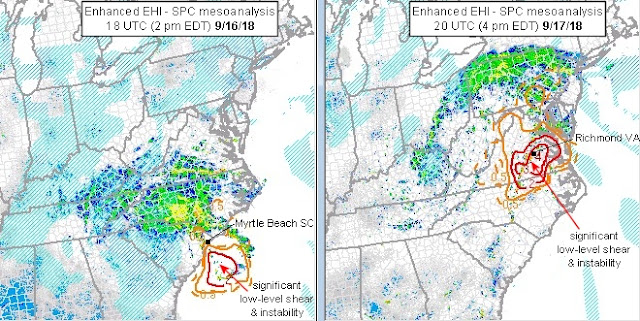 Note that EEHI values most supportive of supercell tornadoes remained largely over water on the 16th.  But, on the afternoon of the 17th, large EEHI values came together inland over Virginia where thunderstorms were occurring with the spread out remnants of Florence as the remaining circulation center over West Virginia now moved northeastward.

Although low-level shear near ground (typically in the 0-1 km layer) is a key factor in hurricane tornadoes, deeper-layer shear (throughout the 0-6 km layer) also appears to be a factor for tornado development and strength with tropical systems over land (see my 2006 paper here).  Stronger deep-layer 0-6 km shear (larger than 30 kt or 15 m/s) seems to be important in such cases.  Comparing analyses of this deeper-layer shear (below) on the 16th with the 17th, notice how the 0-6 km deep-layer shear was rather weak (< 30 kt) over the Carolinas on the 16th, but was stronger (> 30 kt)  over Virginia on the 17th where the killer tornado occurred near Richmond. This was a result of Florence merging with the 500mb trough and westerly flow aloft, discussed earlier:

Stronger deep-layer shear helps strengthen and organize convective updrafts, and can help to support tornadoes when combinations of low-level shear and instability are also in place.

It is interesting that on the 16th, with weaker deep-layer 0-6 km wind shear, a supercell tornado over water (a 'tornadic' waterspout) came directly ashore in Myrtle Beach SC (see image below), but produced little reported damage over land (probably EF0 in intensity): 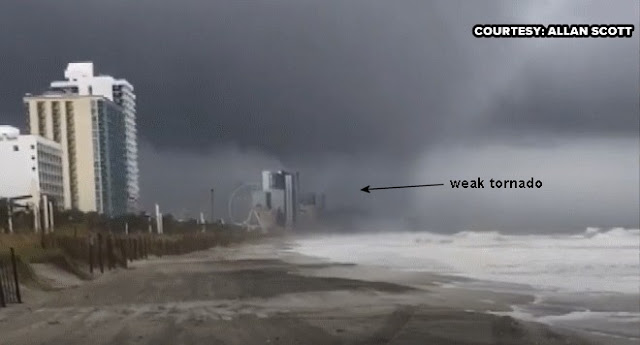 This is in contrast to the killer EF2 tornado near Richmond VA on the 17th (below) when low-level shear and instability combinations appeared more favorable (see the EEHI graphic earlier), and were  supported by an area of stronger deep-layer 0-6 km shear over Virginia (see the 0-6 km shear graphic earlier); this stronger deep-layer shear was absent over the Carolinas the day before.  Here's some more images of the large Richmond tornado: 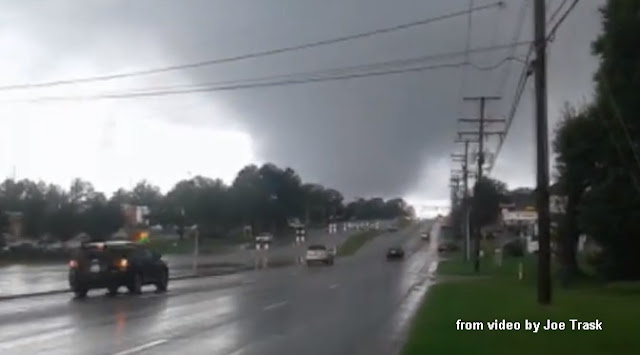 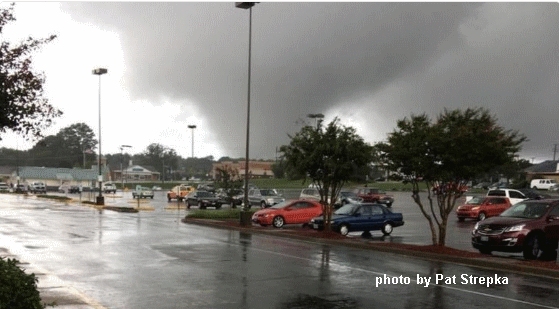 Distinguishing tropical systems that produce stronger or more numerous tornadoes from those that don't produce tornadoes or are associated with brief weak tornadoes is difficult and certainly not that well understood.   But some of the factors discussed above can be helpful at times in forecasting such tornadoes.

If you can, please donate to a charitable organization to help with recovery from Hurricane Florence. 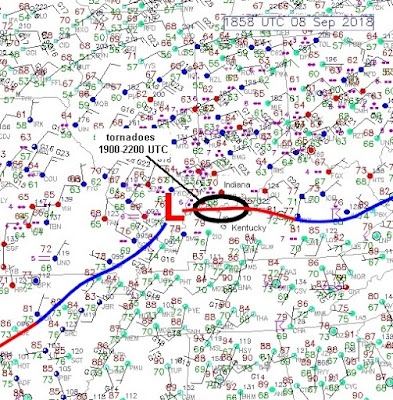 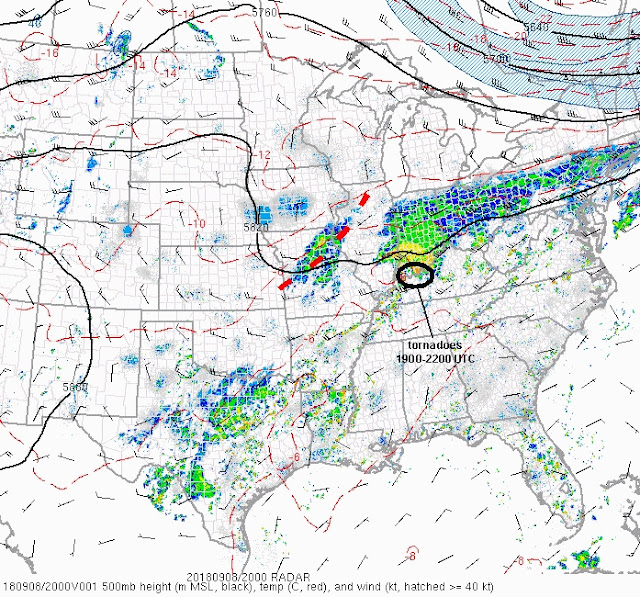 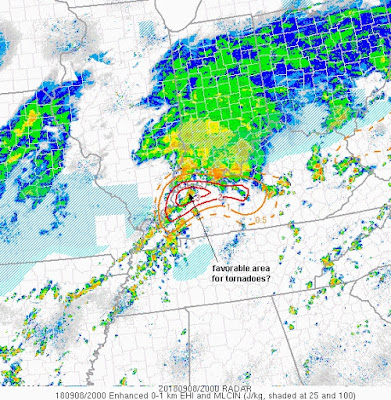 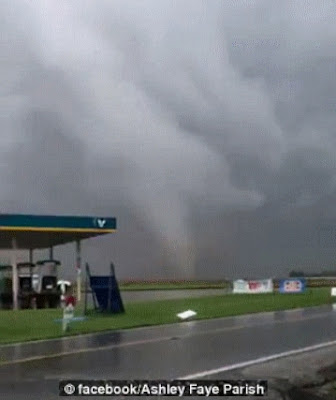 Posted by Jon Davies at 4:05 PM No comments: