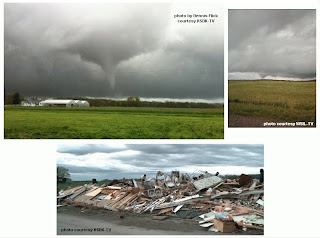 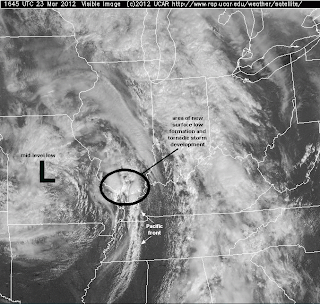 Sadly, one of yesterday's cold-core tornadoes at midday over southern Illinois killed a woman in a double-wide mobile home near the small town of Opdyke (see photos above). It's rare that someone dies in a tornado related to a nearby cold-core mid-level low, as such tornadoes are usually weak and short-lived. This tornado did not appear particularly strong or long-lived, but hit in the wrong place at the wrong time, and will probably be rated either EF1 or low-end EF2. (As I write this, there's no information yet regarding tornado intensity from the NWS).
The same system produced many cold air funnels over Oklahoma on Wednesday March 21, and again over Kansas on March 22 (not shown). The main reason there were no actual tornadoes on those days had to do with the Pacific cool front surging far eastward into the Mississippi Valley, taking the potential surface boundary focus and true surface warm sector well east of the mid-level low spinning over the OK/KS area.
However, on Friday March 23, the mid-level low (see the NAM model 500 mb panel and satellite image above) was moving east again, moving closer to the surface Pacific front that had stalled near the Mississippi River with a surge/spoke of energy aloft. As a result, a new surface low was forming over the mid-Mississippi Valley (see surface map above), providing a surface boundary focus for vorticity and convergence where thunderstorms were building at midday over southern Illinois just ahead of the closed low and cold pool aloft.
One cell generated intermittent tornadoes from near Cape Girardeau MO to north of Carbondale IL. Another cell developed rapidly north of Marion IL and produced the killer tornado near Opdyke shortly before 1:30 pm CDT (1830 UTC). An estimated sounding from the new Rapid Refresh model (set to replace the current RUC model in April 2012) showed sizable CAPE at Marion IL over an hour before the Opdyke tornado, with nearly all instability located below 26000 ft (see the sounding diagram above).
While such a CAPE environment by itself won't support tornadoes with thunderstorms, when coupled with a good surface boundary focus that mazimizes available vorticity as on Friday in southern IL, CAPE "squeezed" into the lower part of the atmosphere can accelerate air parcels upward in storm updrafts to provide rapid stretching needed for tornadoes. There doesn't need to be a bunch of storm-relative helicity or SRH (notice that SRH on the sounding above wasn't large in yesterday's environment); the enhanced stretching with the cold air aloft over the northwest edge of the surface warm sector often seems to be able to do the trick with what otherwise looks like relatively weak SRH/low-level shear. (Note: When both SRH and CAPE are strong in cold-core settings, a somewhat rare occurrence, the associated tornadoes can be stronger and larger as well; see this blog post from last year.)
So, again, the surface boundary focus and proximity of the mid-level low (as well as surface heating from the sun) appear to be very important in producing tornadoes at the ground with cold-core systems. (For additional information, my peer-reviewed paper about "cold-core" tornadoes is here.)
- Jon Davies 3/24/12
Posted by Jon Davies at 2:04 PM No comments: 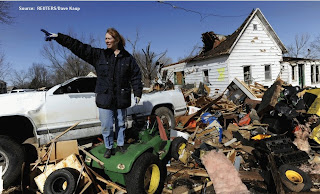 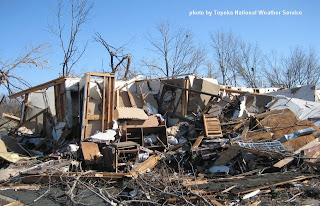 The tornado outbreak this past Tuesday evening into early Wednesday morning took several lives in Kansas, Missouri, and Illinois, and was an early reminder that spring is nearly here in the central U.S. Hardest hit was Harrisburg IL with an EF4 tornado killing 6 people around 5 am Wednesday morning. The first killer tornado (EF2, see damage photo above) hit around 9:00 pm the evening before, southwest of Topeka KS at Harveyville, claiming the life of one man who died later on Wednesday night.
This was a very difficult warning situation. The tornado only lasted about 4 minutes, but happened to go right down through the small town. Had the path been displaced a few miles north or south, we wouldn't have heard much about it. The parent supercell (see arrows on radar composite above) developed near Pratt KS more than 3 hours earlier, producing a brief tornado southwest of Hutchinson, but hadn't produced any other reported tornadoes for over 2 hours since that time. The rotational signature on radar at the time the tornado hit Harveyville was brief and small (see Topeka NWS radar images here). The Harveyville area had been under a severe thundertorm warning for about 30 minutes prior to the tornado.
A look at the meteorological setting shows that, even though CAPE was relatively "small" over east central and northeast KS (< 500-800 J/kg, see RUC soundings above), strong warm advection was occurring from the southwest. A comparison of NAM model temperature & moisture profiles from 6 to 9 pm near Emporia (see 4th graphic above) showed that warming and moistening was occurring in the lowest 1.5 km above ground, with cooling ongoing above that. This reduced a sharp temperature inversion that was present earlier, and changed the thermodynamic environment from "quasi-elevated" (most instability coming from air parcels originating well above ground) to one that was becoming more surface-based.
While never strongly surface-based as seen by the Emporia RUC soundings above (probably one reason the tornado was short-lived), enough low-level stability was being removed by the low-level warm advection in combination with very large low-level wind shear (storm-relative helicity over 600 m2/s2!) to sustain marginally surface-based updrafts that could briefly support a strong tornado. The fact that the parent supercell had been established for so long (3 hours) in flow of more than 80 kts aloft also likely helped the storm produce the tornado in a marginally surface-based setting. This is a reminder that long-lived supercells within a zone of strong warm advection and low-level shear should be watched carefully regarding tornado potential, even if the initial environment ahead of the warm advection looks rather "elevated" in nature.
The last graphic above shows the evolution of the surface pattern and the tornado environment (as suggested by the SPC significant tornado parameter) during the night. Tornadoes occurred in southern Missouri near Buffalo (1 death) and at Branson, and also in southern Illinois with the deadly EF4 tornado at Harrisburg before dawn. Farther north from Kansas City eastward, storms finally outran the warm advection zone and moved into a more stable environment, eventually losing their severity.
Tonight and tomorrow (March 2nd) will likely see a repeat performance of tornadoes over southern MO and northern AR into the Ohio Valley with yet another weather system. People in those areas should be on the alert!
- Jon Davies 3/1/12

Posted by Jon Davies at 1:57 PM No comments: