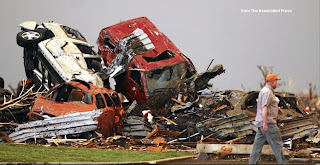 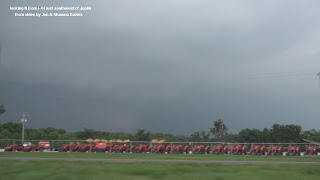 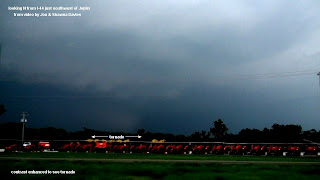 Update, Thursday 5/26/11: The Joplin tornado death toll has risen to 125, making it the most deadly single U.S. tornado since the Woodward OK tornado of 1947. Yet another outbreak of dangerous tornadoes occurred in the Oklahoma/Kansas/Arkansas area on Tuesday 5/24/11, killing several people.

It is now one of the largest single city tornado death tolls in the past 70 years... 89 deaths and climbing. It is the 2nd deadliest tornado event in Missouri history (just behind the 1896 St. Louis tornado in number of deaths). Yesterday's tornado at Joplin, Missouri is yet another massive tragic event in this year of killer tornadoes and huge death tolls.

Shawna and I drove through downtown Joplin minutes before the tornado hit. Sirens were going, but we could not see the tornado, and many people were out and about seemingly unaware or unconcerned. We had been following this storm complex for a couple hours without observing any tornadoes, and though we were a little nervous, we weren't anticipating anything of the magnitude that buried Joplin around 5:45 pm CDT.

We blasted southwest on Interstate 44 to circumvent the approaching mesocyclone on radar that suddenly appeared very strong. As we looked to the north through the trees we caught a brief glimpse of the hard-to-see tornado (see images above, the second enhanced to make the tornado more visible). It was so large and the visibility so poor, that this may have had something to do with why so many people were killed.

Shawna wrote a paper for one of her college classes back in April before the Dixie Super Outbreak on the 27th. In that paper she suggested that, while death tolls from tornadoes have dropped dramatically in the past 50 years due to better warnings and public awareness, that trend might soon begin to reverse again. She noted that "up-close-and-personal" tornado videos may be jading people's attitudes towards the dangers of tornadoes. And, with so many diverse information and entertainment sources distracting people's attention these days, the public may have increasing difficulty "hearing" warnings and grasping the importance of that information through the wall of "noise" produced by our information technology.

Given what has happened in the past month, I wonder if she may well be right. Bonar Menniger's excellent book about the 1966 F5 Topeka tornado, "And Hell Followed With It", details how many people followed and heeded tornado warnings from TV and radio that day (there were only local stations focusing on local information back then). The death toll of only 17 from that evening in Topeka might in some ways suggest a more focused attention and response from the public regarding truly hazardous events back then contrasting with today.

It is clear that the Joplin event was a difficult one to prepare for, with a rain-wrapped hard-to-see tornado forming just west of town when there hadn't been tornadoes from the same storm complex prior to that. And the tornado was huge and violent, around a mile wide going right down through a populated area. But with around 20 minutes of advance warning from the NWS, the death toll is still staggering, and leaves me pondering what could have been done to reduce it. I am so saddened this morning by what has occurred.

I will mention that there were a number of storm chasers who stopped to help with search and rescue in Joplin, including Tyler Costantini and Jay Cazel, Mira Lee, and the Cloud 9 tours group. That's awesome... all those who stopped and helped in the aftermath deserve big credit for doing so.

Shawna's and my thoughts and prayers truly go out to all who have suffered losses in the tornadoes of recent days.

Thank you and your wife for a finely detailed analysis of the terrible tornado in Joplin, MO. I wish people would listen more than clog their minds with garbage.
Again, a fine read and I hope it does some good and I hope lots more people will realize what your piece is saying and truly do pay attention.

What a terrible incident! I hope those who have suffered and lost a lot from this event are fully recovered by now. I share your opinion on those people who go "up-close-and-personal" with tornadoes just to take videos instead of running to the safest spot to save their lives. It's kind of foolish to take damaging tornadoes lightly.