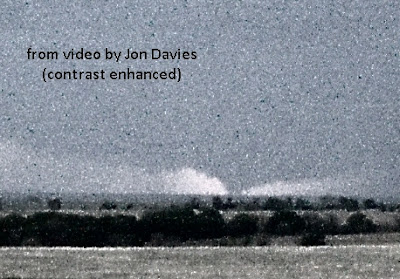 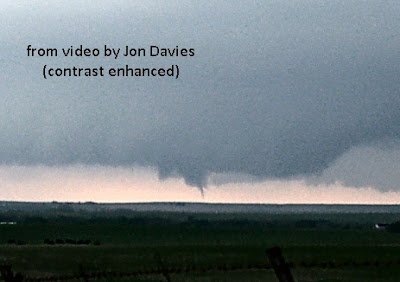 Systems coming through the central Plains the first half of May have been generally unimpressive, but last Thursday's setting suggested at least a chance of supercells and maybe a brief tornado in east-central Kansas (KS).   This potential was relatively close to Kansas City, requiring only one tank of gas and little exposure to Covid-19.   So Shawna and I  headed toward Emporia, KS at late afternoon for our first storm chase of 2020.

To our surprise, we ended up seeing several tornadoes in open country northwest of Emporia (see images above).   Because some didn't seem to get reported, this blog post will document what we saw,  and I'll also discuss the setting for Kansas' first tornadoes of 2020.

After watching two marginal supercells dissipate near Emporia around 6:00 pm CDT, we nearly turned around and headed back to Kansas City.  But model forecasts from the morning (more about that later) had consistently indicated that wind shear over eastern KS would pick up at early evening, so we re-focused on a new cell west of Emporia, approaching it heading west from Osage City around 6:30 pm CDT: 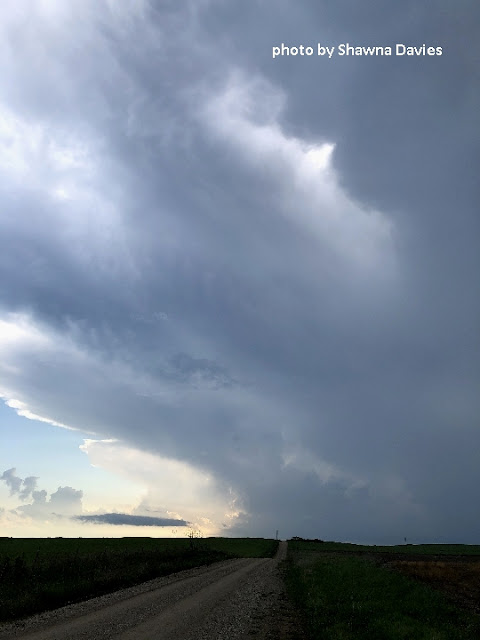 Notice the inflow cloud streak pointing into the storm at lower left in the photo above.  That often means a storm is beginning to really organize and become a supercell.

We found a hill a couple miles west of the KS turnpike east of Admire, and watched as the storm base to our west lowered and took on some structure just before 8:00 pm CDT: 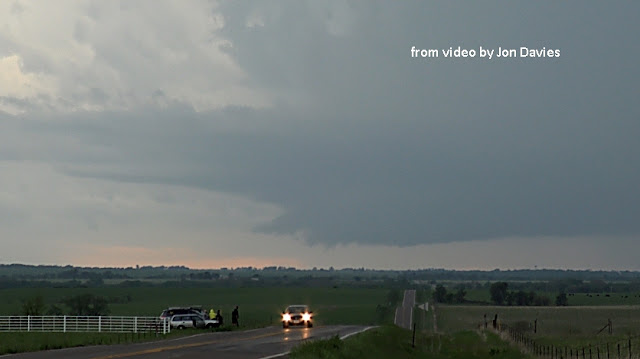 Around 8:05 pm CDT, some scud developed just under the lowering, and Shawna said, "I think that's about to drop a tornado."  A moment later, several miles to our west-northwest, it did: 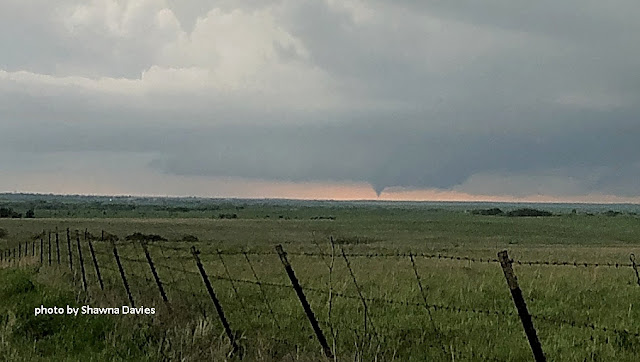 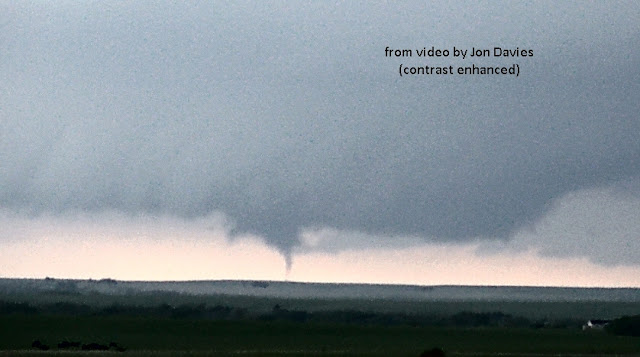 This tornado north of Bushong lasted a couple minutes.

Here's a wide view of the Topeka NWS radar lowest-elevation base reflectivity at the time of the tornado, with the meso location and our viewing location indicated (click on images for a larger view): 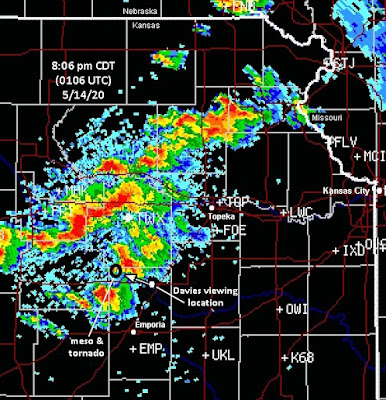 A few minutes later, another "needle" funnel (possibly a tornado) developed from the same mesocyclone as it moved slowly northeast: 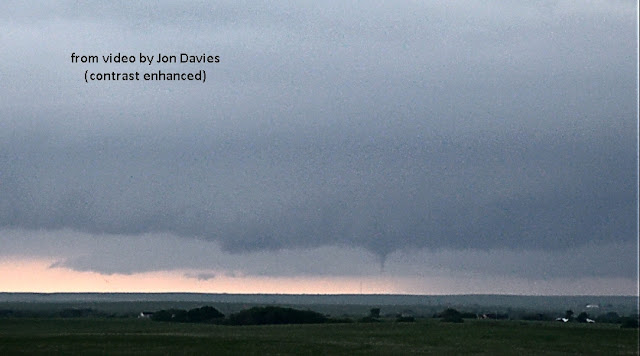 In the image above, notice the 2nd rain-free base farther west, lower to the horizon.  We  soon became aware that this was a separate storm some distance to our northwest, and around 8:19 pm CDT, some dust appeared to rise below this base, along with a small "nub" that formed to the right: 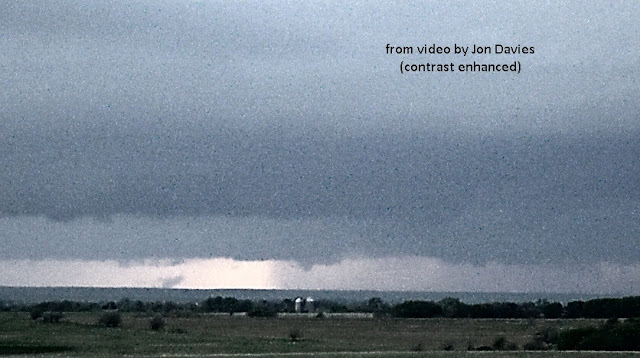 Here's the radar lowest-elevation base reflectivity view at this time: 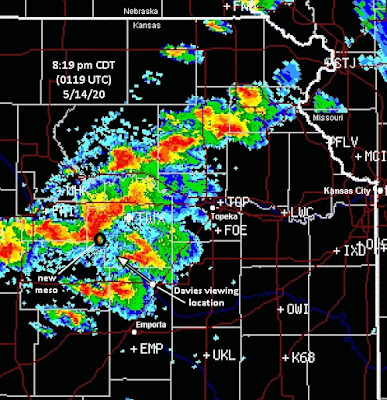 This storm near Alta Vista, KS was 20+ miles to our northwest, but it began to capture our attention while the previously tornadic storm closer to us began to look less organized and moved away.  Rather than driving closer through rugged Flint Hills and risk losing visibility behind hills, we decided to stay on the same hill and observe the storm's evolution by zooming in with the video camera.

We soon saw rain bands develop along the distant base, and at 8:20 pm a thin funnel extended nearly all the way to the ground.  Here's the funnel/tornado at full zoom backlit by lightning, located somewhere southeast of Alta Vista: 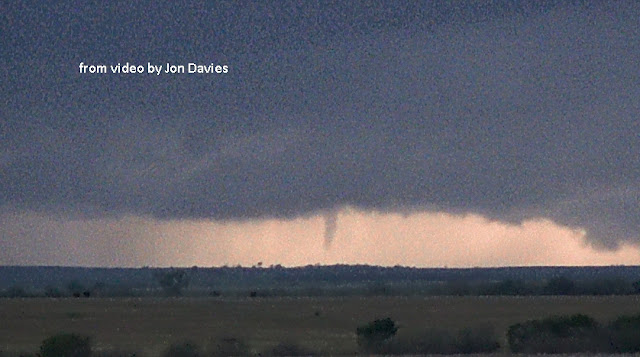 This lasted a minute or two while a lowering farther right became visible (see right edge of the image above).

After the thin funnel dissipated, I zoomed back out to shoot lightning for a couple minutes, but at 8:27 pm CDT I suddenly became aware of what looked like a "cone" tornado on the horizon where the new lowering had been.  Here are grainy zoomed-in video images of that feature (apparently a tornado) both in regular contrast at dusk, and also with contrast strongly enhanced: 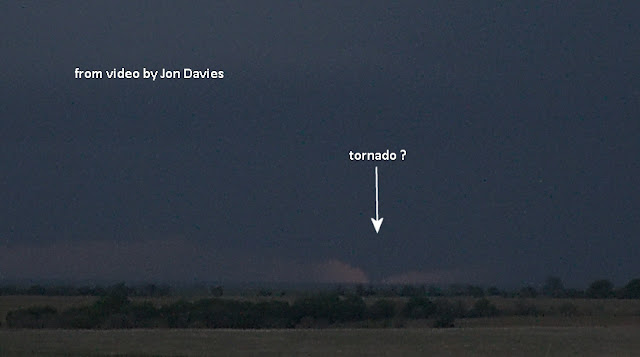 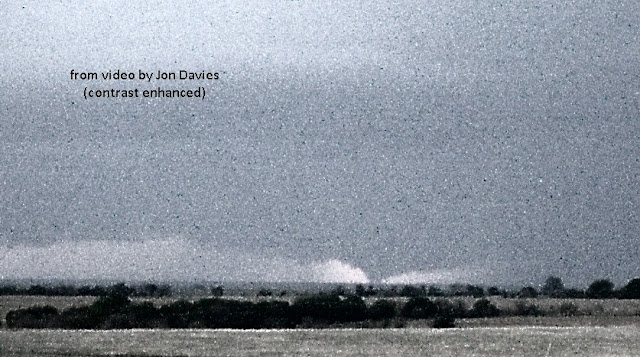 This feature lasted several minutes before a curtain of rain (the "hook"?) wrapped around from the left and hid it from view.  Here's a radar lowest-elevation reflectivity view at about the same time: 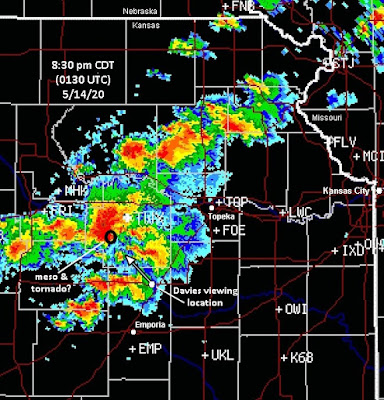 This sizable-looking "tornado" was located in southwest Wabaunsee County somewhere east-southeast of Alta Vista and west-southwest of Eskridge, KS.  I haven't seen any images of it from other chasers.  But it sure looked like a tornado, and was co-located with a mesocyclone circulation (marked with black circle on the image above) from radar velocity images (not shown).

After that, we watched lightning for a few minutes, then decided to retreat eastward as two other cells approached from the southwest at dark.  With my aging eyesight, I tend to avoid chasing after dark, so we headed back toward Kansas City.

One of these new cells from the southwest produced yet another tornado, observed by Reed Timmer around 8:45 - 8:55 pm CDT near Council Grove, KS.

Looking back at the May 14th setting, it wasn't particularly impressive for supercell tornadoes.  The morning NAM model 500 mb forecast for that evening showed a weak shortwave trough (red dashed line) approaching Kansas in west to east midlevel flow aloft, but only 20-25 kts of wind over east-central KS, not exactly great support for supercells: 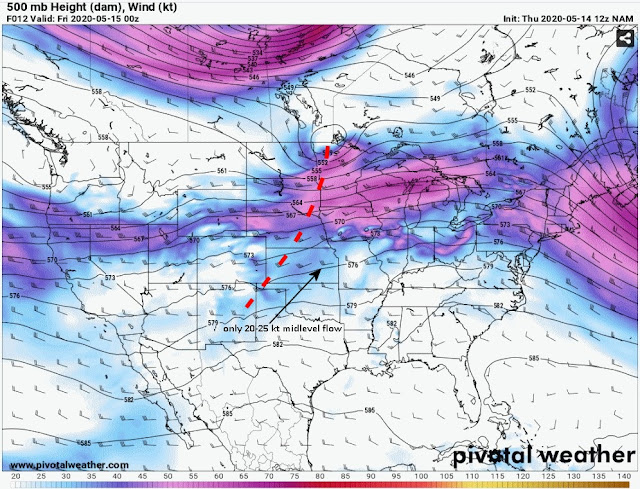 Yet the new HRRR version 4 model (HRRRv4) on the College of DuPage site (with a new panel showing 0-3 km CAPE) showed a decent overlap between low-level CAPE and low-level wind shear (storm-relative helicity or SRH) from the morning forecast valid at early evening:

The same model forecasted a storm that looked like a supercell in the Emporia-Topeka area at the same time (see right-most panel in image above). So, this low-level CAPE/shear overlap suggested a chance of supercell tornadoes via enhanced tilting and stretching of horizontal vorticity within storm updrafts developing in this low-level CAPE/SRH environment, _if_ there would be enough midlevel wind flow and deep-layer shear to support decent supercell storms.

Moving ahead to the evening, here's the NWS-analyzed surface map at 7:00 pm CDT, with a black oval highlighting the area where storms were developing in east-central KS near and just south of a stationary front: 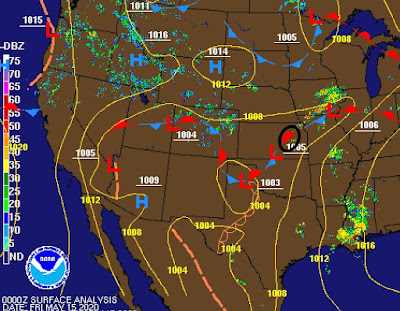 With surface winds from the morning forecasts expected to become more southeasterly at evening over east-central KS, low-level shear would likely increase, along with the deep-layer shear important for supporting supercell storms.  That was indeed the case, as seen in this graphic from the SPC mesoanalysis comparing surface to 6 km wind shear at 5:00 pm CDT (left panel) and at 8:00 pm CDT (right panel): 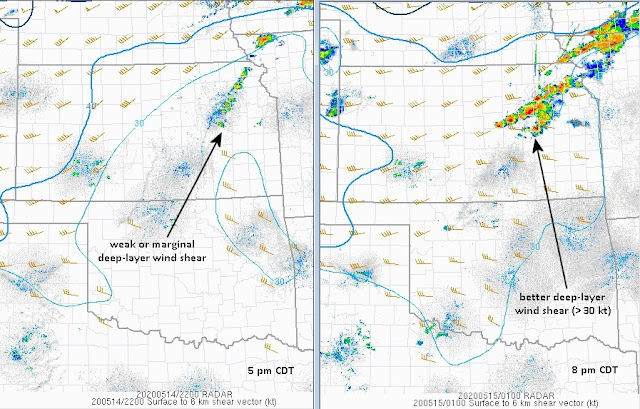 Notice how the deep-layer shear increased to greater than 30 kt from afternoon to evening, enough to help organize storms into persistent supercells in the Emporia-Topeka area. 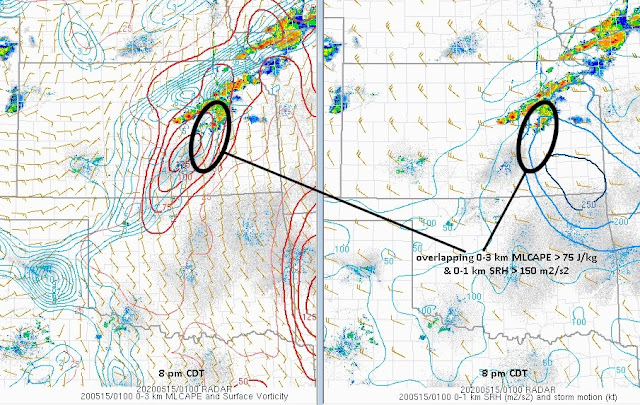 This confirmed the HRRRv4 forecast from the morning model run (shown earlier).  I've discussed overlapping low-level CAPE and SRH areas in other 2020 case blog posts, and it seems there is increasing evidence that these two parameters _together_ can be useful in assessing environments with supercell tornado potential when deep-layer shear is also supportive.

Thankfully, Thursday's tornadoes hit in open country, and lasted only a few minutes each.  So there was no damage reported.

As storms organized in the increasing wind shear at dark, thunder became constant and lightning prolific as we watched the supercells to our west and north: 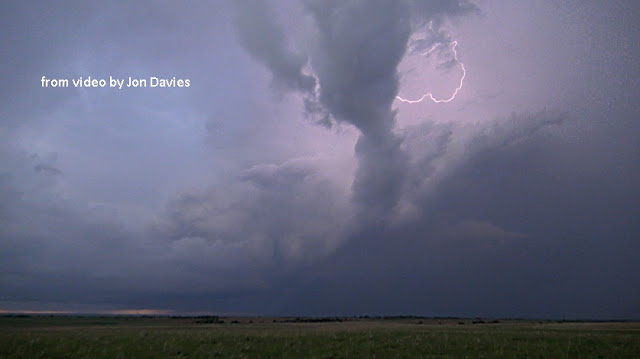 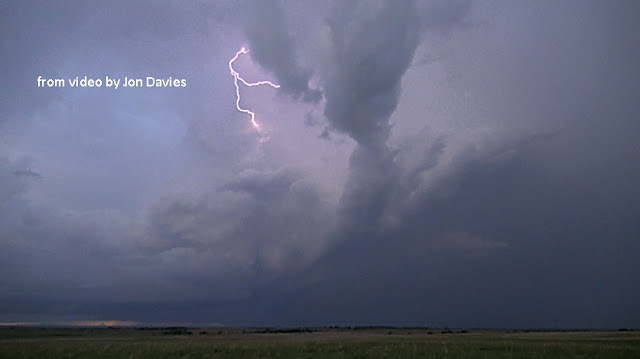 Here's an image Shawna took looking south at the edge of the anvil from our cluster of storms, with mammatus visible and mostly clear skies to our south beneath the "cap" at dusk: 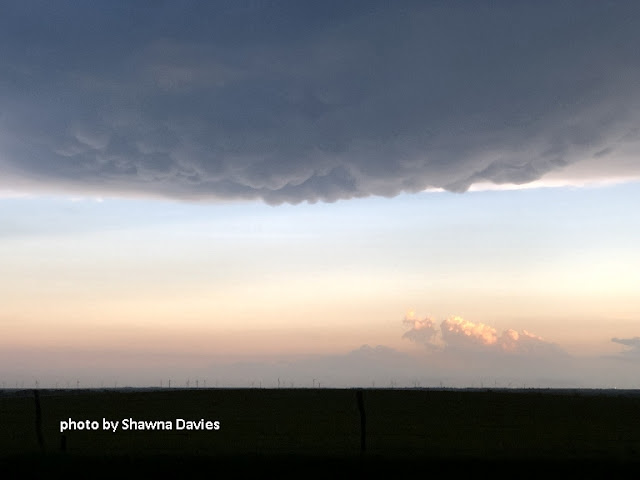 You just don't see or experience the wide-openness of the Plains living in Kansas City, so it was invigorating to watch storms in open Flint Hills country on May 14!