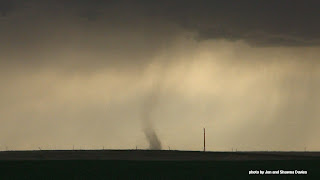 Shawna and I are part of "The Great Tornado Hunt" on The Weather Channel with Mike Bettes and other Severe Studios chasers this month. This blog post looks briefly at the 3 severe weather settings we chased this past week.

The first day involved a landspout tornado in Washington County, Colorado on Tuesday 5/17 west of Cope. We left Kansas City late morning and arrived in Burlington, Colorado late afternoon as a cell blew up west of Akron. Realizing we probably couldn't catch this cell as it headed northward too fast, we drove toward the dryline on I-70 and headed north at Siebert, not expecting much from the mushy looking towers to our west and northwest. One cell did develop a sharp high base, and as we approached Cope, Shawna spotted a dust whirl under it, 10-15 miles to our west. This became a landspout for a few minutes over open country (see photo above). We were lucky to catch it, but a later look back at the SPC mesoanalysis 0-3 km lapse rates and surface-based CAPE fields (see 2nd image above) at 2300 UTC showed the cell we were watching to be in a favorable location where a nose of steep low-level lapse rates (8.0-9.0 deg C per km) and decent SBCAPE values (500-1000 J/kg) were co-located with it on the dryline wind shift. Stretching on the boundary with these ingredients apparently set the stage for a mesoscale accident that we literally bumbled into. The original cell farther to our north was in cooler surface air and less steep low-level lapse rates. Colorado "magic" over elevated terrain is sometimes amazing, with dew points this day only in the low 40s F east of the dryline, but surface heating along the dryline helping to do something interesting!

The next day (Wednesday 5/18) we were tempted to head from Burlington to western Oklahoma where much stronger instability than in eastern Colorado was located, but we weren't excited about the long drive. Looking at model forecasts of the pattern, I noticed that mid and upper level dynamics for lifting were forecast to be much stronger over Colorado, while Oklahoma was near a shortwave ridge at 500 mb / roughly 18,000 ft MSL (see maps in the 3rd image above). Much of that state was also located beneath or south of the southern branch of the polar jet, so I wondered if, even with all the instability, subsidence in that region might keep Oklahoma "capped", or at least keep storms there from intiating until after dark. Because Shawna and I don't get much opportunity to observe upslope storms, we decided to stay in Colorado, and were rewarded with a beautiful supercell that tracked from near LaJunta to Kit Carson, again over gorgeous wide open country (see photos in the 3rd image above). I have to admit we were both surprised that no storms at all developed in Oklahoma, even after dark.

Our final chase day of the week was Thursday 5/19, with a potentially dangerous setting over southern and central Kansas. We started in thick fog that morning at Colby, Kansas, but drove to sunshine in Great Bend at mid afternoon near the intersection of the warm front and the dryline. Signficant tornado parameter values in this area were sizable (> 2.0-3.0, see 4th image above) as storms began to develop just north of Great Bend. But during our afternoon update online with The Weather Channel, both Shawna and Dr. Forbes expressed concerns about the rapid low-level transition in temperatures across the warm front in central Kansas, going from low 80s F to only near 70 F in about 30 miles or so. Shawna also felt strongly that supercells might become high-precipitation (HP) as they moved northeastward into the cooler air north of the front.

I thought the tornado potential was significant, but once again my wife was right! As the cell we followed moved toward I-70, temperatures cooled and the atmosphere became more hazy, reducing visibility. By the time the storm approached Lake Wilson, it was HP in character and hard to see what was going on in the often rain-wrapped area of low-level rotation (see 4th image above). There were possibly some very brief tornadoes in there, but we could not see them, and I have not yet heard any reports of tornado damage from this cell. The contrasting RUC analysis soundings above (last image) at Great Bend and Salina on opposing sides of the warm front showed the issue: low-level convective inhibition (MLCIN) and low-level stability increased rapidly across the front, with large MLCIN making storms increasingly elevated the farther north they moved, even with large low-level shear (storm-relative helicity 300-400 m2/s2). With such a cool low-level thermodynamic environment north of the front, it turned out to be not a strongly favorable set up for tornadoes.

When storm chasing, on most days there are things to learn and refine your knowledge with, if you pay attention :-). And thankfully, there were no strong/dangerous tornadoes in populated areas of the plains last week. Early this next week, Shawna and I will be heading out into the central and southern plains as potential for severe weather and tornadoes picks up again.