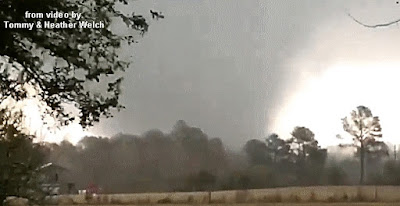 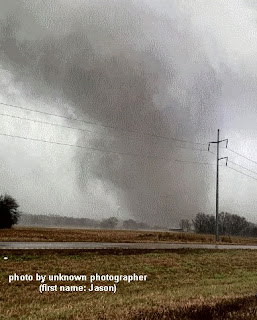 A strong storm system moving across Louisiana (LA), Mississippi (MS), and Alabama (AL) on Monday, December 16, 2019  caused the first tornado deaths in the U.S. since May 2019.  A large long-track EF3 tornado above (at top) in west-central and central LA left one person dead near DeRidder, and was on the ground for over 60 miles, striking Alexandria around noon on Monday.

Another tornado (EF2) at late afternoon from a supercell embedded within a squall line killed a married couple in Lawrence County in northwest AL.  The bottom photo above shows an EF2 tornado north of Tupelo MS earlier from the same embedded supercell.  In all, around 30 tornadoes were reported in LA, MS, AL, and Georgia on December 16 through December 17. 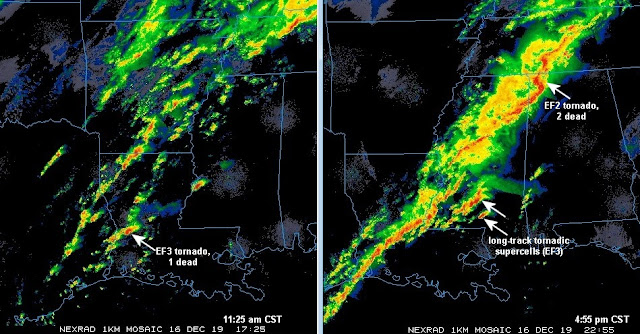 This storm system was a good example of a large "positive" tilt trough in mid-levels (see thick red dashed line on 500 mb forecast graphic from the NAM model below) causing a significant amount of severe weather.  As noted on the NWS "Jet Stream" educational site, positive tilt upper troughs (where the southern end of the trough is much farther west than the northern portion) tend to produce the least amount of severe weather, but that certainly wasn't the case on December 16: 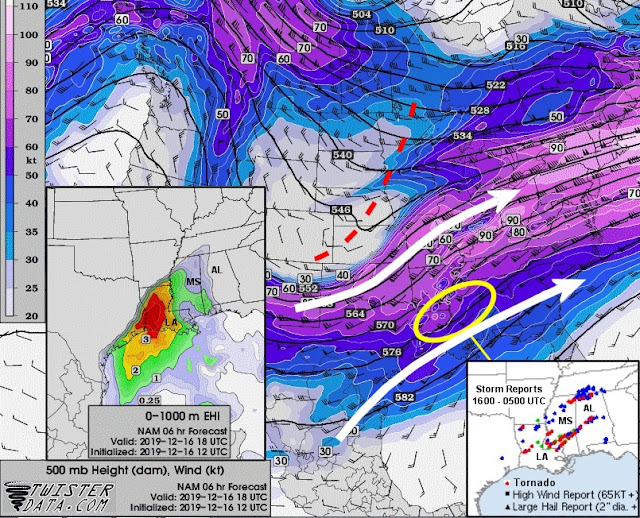 A broad pattern of spreading jet branches (thick white lines and arrows on graphic above) ahead of this trough was causing upward forcing over the southern states.  With plenty of wind shear and enough instability present at midday over LA and MS to support supercell tornadoes (see inset showing energy-helicity index or EHI above, combining instability and low-level shear), the outbreak was in progress from late morning on.  Note that the southern jet branch above tended to define the southern end of the severe outbreak area, while the northern extent of instability defined the northern end. 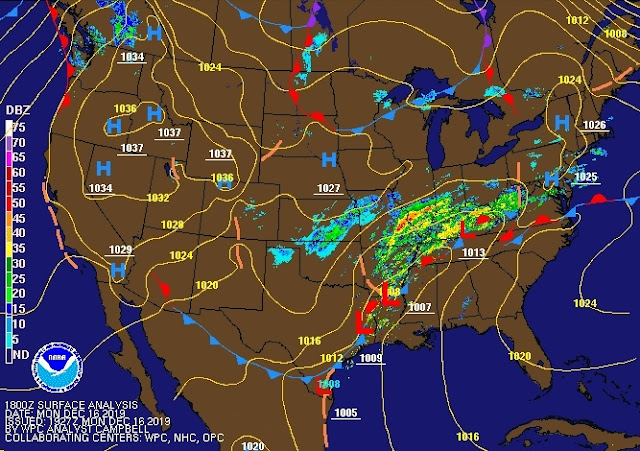 A RAP model sounding at midday at Alexandria LA shows how primed the atmosphere was for tornadoes over this area: 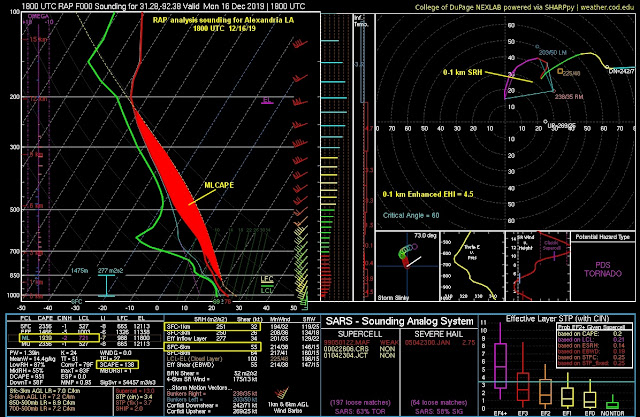 There was close to 2000 J/kg of MLCAPE, around 250 m2/s2 of 0-1 km storm-relative helicity (SRH), and over 50 kt of deep-layer wind shear.  Add to that a lack of convective inhibition (MLCIN) and plenty of CAPE in low levels below 3 km above ground (100-150 J/kg) to promote low-level stretching of updraft parcels, and this was an environment very supportive of supercell tornadoes with discrete or semi-discrete cells.

In recent years, the introduction and use of updraft helicity in computer model forecasts can help forecasters predict where rotating supercell storms (and, by association, possible tornadoes) may develop and track.  A HRRR model forecast from the morning of December 16 (below) suggested that long-track supercells would develop from central LA into southwest MS between 1500 UTC (9 a.m. CST) and 2100 UTC (3 p.m.CST), which was a good model forecast: 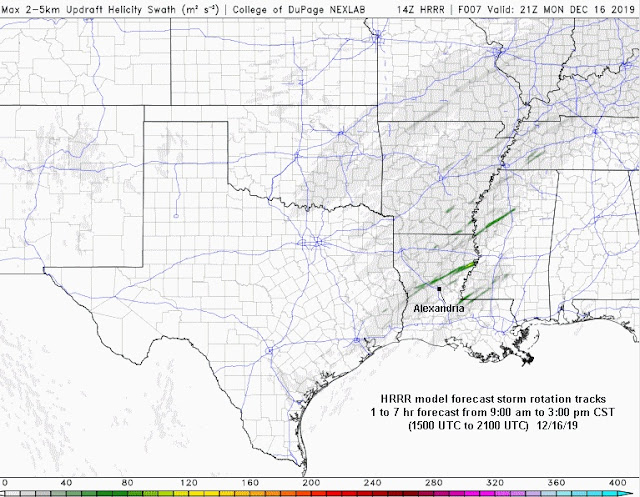 By mid to late afternoon at 2200 UTC (4 p.m. CST), the focus for supercells and tornadoes had shifted east to Mississippi and northwest Alabama, as seen on the SPC mesoanalysis graphic below: 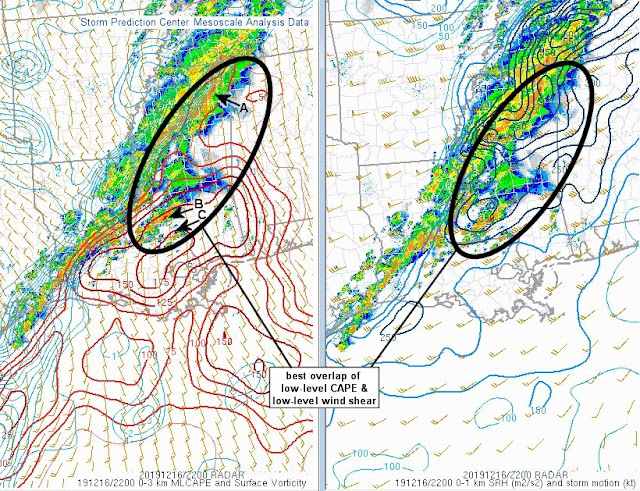 The best combinations of low-level wind shear (0-1 km SRH) and low-level instability (0-3 km MLCAPE, see black oval-enclosed area above) were over Mississippi into northwest Alabama, where low-level stretching and tilting of wind shear within stronger storms would be enhanced, supporting low-level rotation and tornadoes.  The cells marked "A", "B", and "C" in the graphic above were consistent long-track tornado producers.

The supercells marked "B" and "C" on the SPC graphic above were particularly effective tornado producers.   From these cells, images in sequence below show a large mid-afternoon tornado northwest of McComb MS, a large tornado shortly before 5 p.m. CST near Columbia MS, and the EF3 tornado that struck Laurel MS at dark.  Power flashes are quite visible in the latter two images: 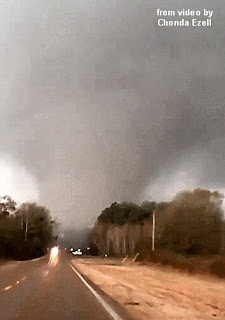 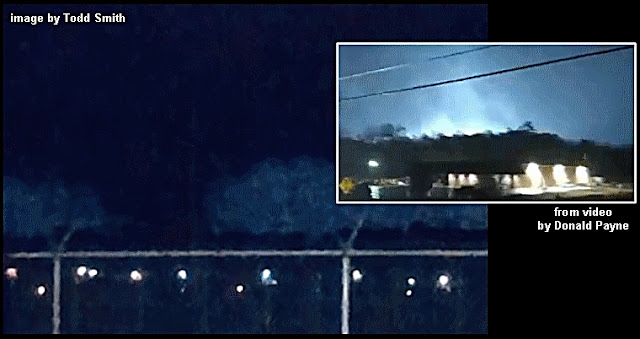 As is so often the case these days, excellent NWS warnings and media coverage probably saved many lives in this outbreak.