The Jonesboro, Arkansas tornado on March 28, 2020: A subtle and difficult forecast setting. 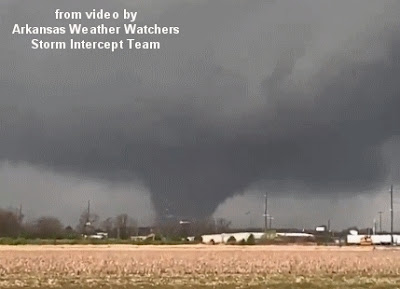 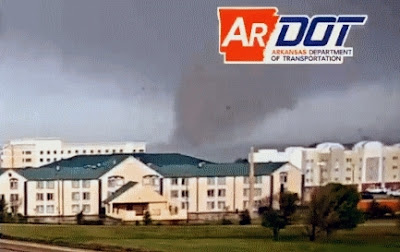 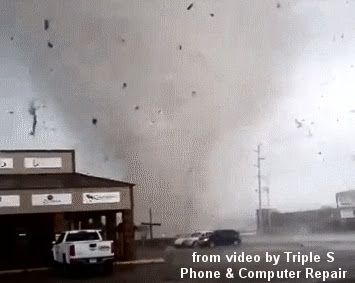 As Covid-19 keeps expanding throughout the U.S. (we all need to keep following social distancing guidelines!), thoughts and well wishes go to people like fellow storm chaser Dr. Bill Hark in Virginia who has been sick with the virus.  We hope you recover soon, Bill.

With this going on and more than 4500 Covid-19 deaths now in the U.S., tornadoes may seem like "small potatoes".  But spring is upon us, along with the threat of tornadoes, no fooling intended on this April Fools Day.

Saturday's EF3 tornado that struck Jonesboro, Arkansas (AR) around 5:00 pm CDT (2200 UTC) is a reminder of that (see photos above).  With a tornado watch out a couple hours in advance and good warnings, no one died with 22 injuries reported, which is good news.

Most meteorologists on March 28 (including me) were focused on the potential for tornadoes over Iowa and Illinois, but the local environment really ramped up quickly in northeast AR during the afternoon, and was more subtle than one might expect prior to a large tornado.  So, I spent some time taking a closer look at this event.

Morning model forecasts did not suggest much low-level shear over AR compared to farther north near a warm front (see 0-1 storm-relative helicity / SRH forecast for mid-afternoon below): 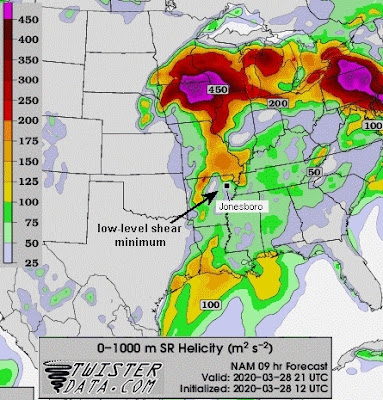 But as the southern end of a large upper system approached (not shown), a low-level jet at around 5000 ft MSL (not shown) increased from 30 kt to 45 kt over northeast AR during the afternoon, helping to generate enough low-level shear to support tornadoes, which we'll discuss in a bit.  What might also be easy to miss is that a subtle boundary also appeared to play a role.

Below is a 3-panel composite radar image from late evening on March 27 through midday on March 28 showing this northeast-southwest boundary (see white arrows) drifting eastward across Arkansas during the 18 hours before the tornado: 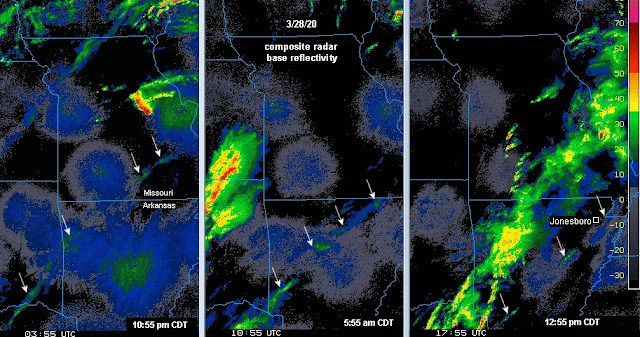 Although it's not clear what originated this boundary (NWS-analyzed surface maps showed this as a cold front, which I don't think it was), it appeared to stop near Jonesboro and even back up a bit to the west during the afternoon.  Here's the surface map I analyzed at 2100 UTC (4:00 pm CDT) about 45 minutes before the tornado struck Jonesboro (notice the backed southeasterly surface wind at Jonesboro). This boundary is shown as a thick red-blue dashed line over AR: 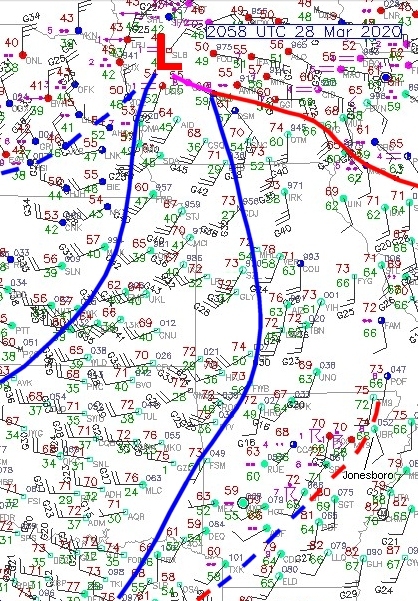 And here's a composite radar image at 2125 UTC (4:25 pm CDT) with the boundary from the 4:00 pm CDT surface map above superimposed as a white dashed line: 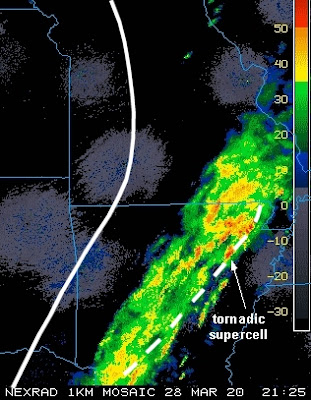 Notice that the Jonesboro tornadic supercell (white arrow, producing its first tornado near Amagon AR at this time, southwest of Jonesboro) appeared to be moving northeast right along this boundary.  It's possible this boundary provided increased low-level wind shear and convergence to help support tornadoes.

Regarding storm environment parameters over northeast AR, the SPC mesoanalysis showed an area of enhanced low-level MLCAPE (0-3 km above ground, 1st panel below) and, although not particularly impressive, an area of somewhat enhanced 0-1 km SRH (around 150 m2/s2, 2nd panel below) near Jonesboro: 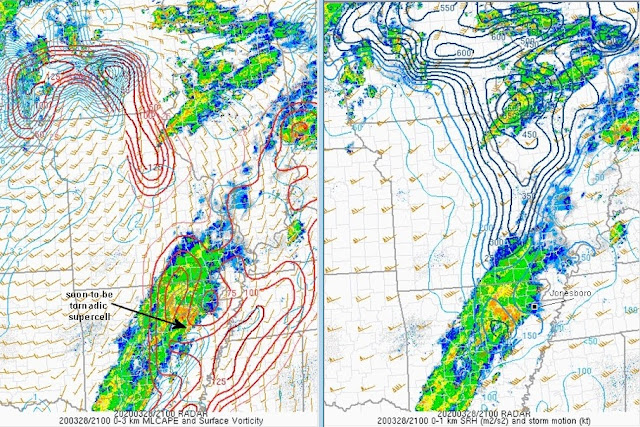 This "overlap" may have set the stage for enhanced tilting and stretching of low-level SRH with the supercell storm moving along the aforementioned boundary.  The 2100 UTC SRH over northeast AR (larger than forecast from the morning model runs) appeared to be the result of the low-level jet increase during the afternoon that I mentioned earlier. 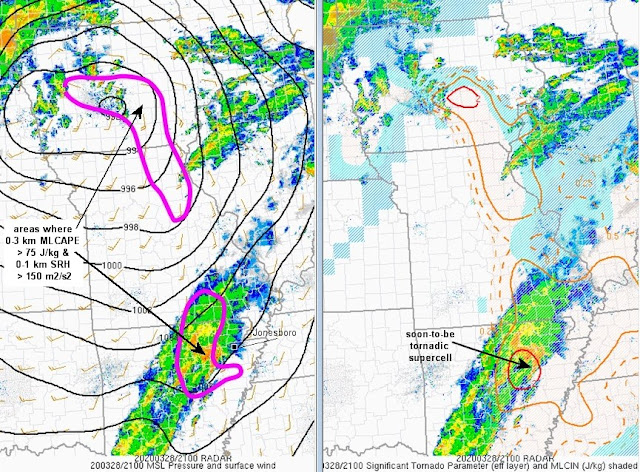 Notice that the genesis region of the Jonesboro tornadic supercell was in the purple area over northeast AR, again suggesting localized potential for enhanced low-level tilting and stretching of SRH along the boundary discussed above.  The 2100 UTC effective-layer significant tornado parameter (STP, 2nd panel above) also suggested support for supercell tornadoes over northeast AR.

Here's the 1-hour forecast sounding from the RAP model for Jonesboro valid at 5:00 pm CDT (2200 UTC) at the time of the tornado, suggesting the localized support for supercell tornadoes near the boundary: 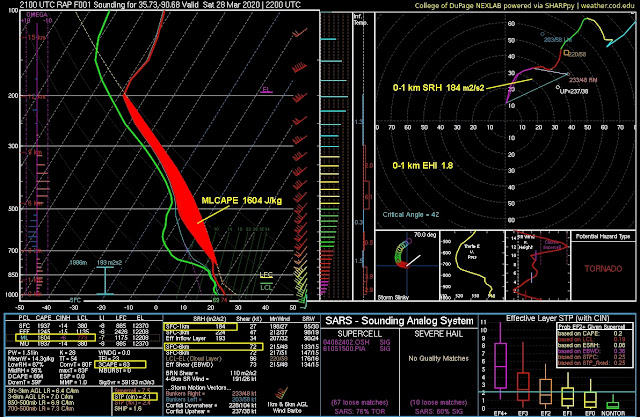 Although both STP and the energy-helicity index (EHI) weren't especially impressive (both parameters around 2.0) for a large EF3 tornado, they do indicate an environment supportive of tornadoes, one that may have been given a "boost" by the presence of the boundary in addition to the sounding environment shown above.

Here's a larger view of the forecast afternoon setting from the morning NAM model run, showing the large 500 mb trough moving through the central U.S. with the typical spreading jet stream pattern (thick white curved arrows) ahead of it, providing dynamic forcing and lift: 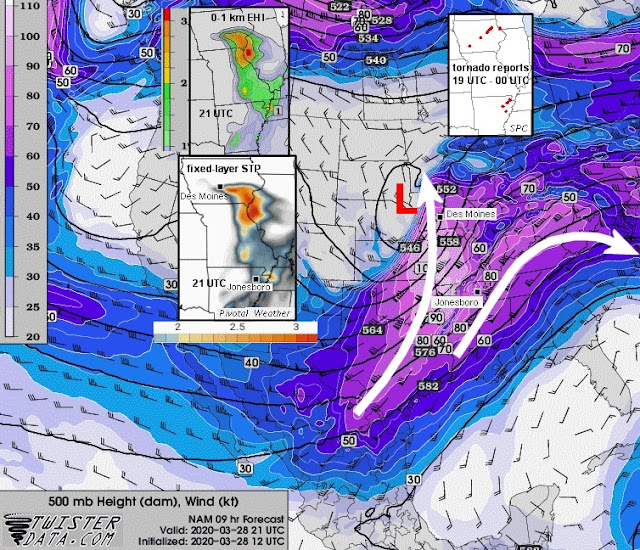 The insets on the graphic above show EHI and fixed-layer STP forecasts for mid-afternoon (again, not very impressive for northeast AR compared to areas farther north), and SPC tornado reports during the afternoon.

This case is a good illustration of how important it is to monitor features and parameters in real time, as the mid-afternoon SPC mesoanalysis and surface map indicated increasing low-level shear and support for supercell tornadoes near the boundary over AR, which was not forecast well by the morning model runs.

Away from Arkansas, notice that over Iowa this was a "cold-core" tornado event  with a closed 500 mb low nearby and a boundary intersection (warm front and Pacific cold front) over central Iowa (see the surface map earlier above).  As is typical with cold-core settings, several tornadoes occurred near this boundary intersection over Iowa as it evolved northeastward during the afternoon, including this tornado northeast of Des Moines near Rhodes, Iowa after 4:00 pm CDT: 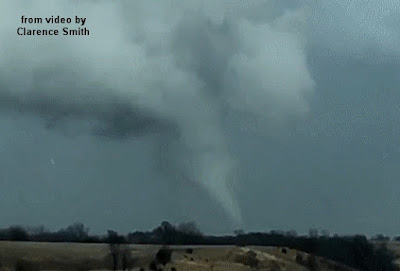 Back to Arkansas, the Jonesboro tornado setting and environment was more subtle than those accompanying recent large tornadoes such as the nighttime Nashville tornado back on March 3 and yesterday morning's tornado near Eufaula, Alabama (March 31).  In both those cases, the tornadic supercells were near a warm front or stationary front, and low-level shear was larger and more evident (0-1 km SRH 300-450 m2/s2) than near Jonesboro on March 28 (0-1 km SRH 150-190 m2/s2).

I hope everyone reading this navigates the Covid-19 outbreak carefully and in reasonable health over the next couple months!