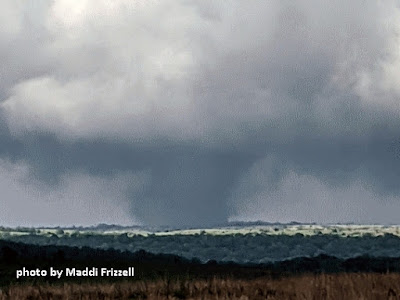 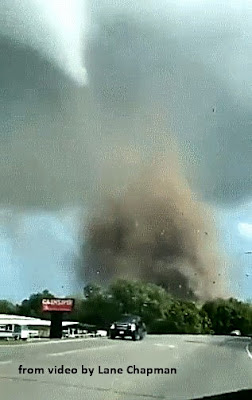 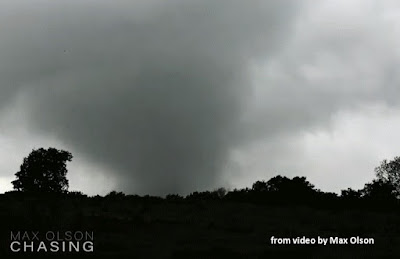 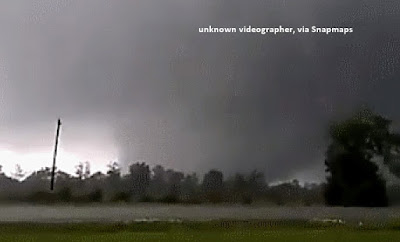 ***** Update 4/24/20:  The strongest-rated of the southern Oklahoma tornadoes so far was the one that hit Madill (2nd image above), killing two people (there was some confusion in online reporting the day after the tornadoes, with many news outlets reporting only one death).  Also, the strongest-rated tornado of the day was the one that struck Onalaska in southeast Texas, killing 3 people.  This massive tornadic supercell moved on across central Louisiana during the evening, killing one other person south of Alexandria as it went on to produce several tornadoes.  There were 6 total tornado deaths on April 22, 2020.  *****

Yesterday's tornadic supercells in southern Oklahoma (OK) were photogenic, from the photos above, and also deadly.  The tornado in the 2nd image above (by Lane Chapman) killed one person when it hit the south side of Madill, OK shortly before 5:00 pm CDT.

The top photo above is a large tornado that hit in open country northeast of Ardmore and Springer, in south-central OK, and the 3rd image above is a tornado near Wapanucka, OK, west of Atoka in southeast OK.

Much farther southeast, a large tornado struck Onalaska and Seven Oaks in southeast Texas (TX) around 6:00 pm CDT (bottom image above).  Sadly, this large "wedge" tornado killed 3 people near Onalaska.   It was far removed form the setting in Oklahoma and spawned by a monster supercell that continued through southeast TX and on into central Louisiana during the evening.

My focus in this discussion will be on the tornadoes in southern OK, where forecasters expected tornado development, and did a great job anticipating this event.  But it also was a bit unusual for April in that it involved a "cold-core" low at 500 mb (roughly 18,000 ft MSL) near the OK-Kansas border moving east-southeastward as a "positive" tilt wave disturbance across Oklahoma and Texas (see NAM 500 mb model forecast for mid-afternoon below, with "spreading" flow indicated ahead of the wave): 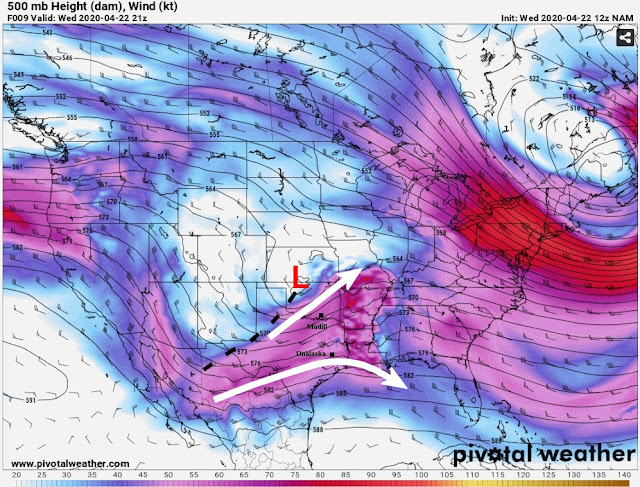 My experience has been that 500 mb "cold-core" lows (see this paper) moving east-southeast early in the season aren't that effective at producing significant tornadoes, but this system was an exception.  This was probably due to the large amounts of total CAPE available (2500-3500 J/kg, not shown) because of surface dewpoints in the upper 60's and low 70's F into southern OK at mid-afternoon (see 4:00 pm CDT / 2100 UTC surface map below): 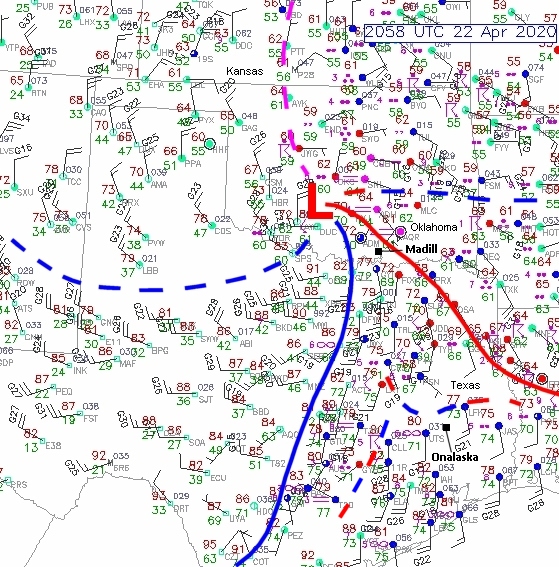 Most early spring cold core events in the Plains involve dewpoints only in the 50's F, usually resulting in comparatively weak tornadoes.  But there are "high-end" cold-core events that have much more moisture, such as 7/19/18 in central Iowa and 10/4/13 in northeast Nebraska.  With access to larger moisture and CAPE, and these can produce stronger tornadoes.

Notice how narrow the moisture axis was over south-central OK on the surface map above, southeast of the surface low.  This is typical of cold-core tornado events.  Also notice how the 500 mb and surface pattern matched this composite "cold-core" pattern below, _if_ you rotate the composite pattern clockwise 60-90 degrees: 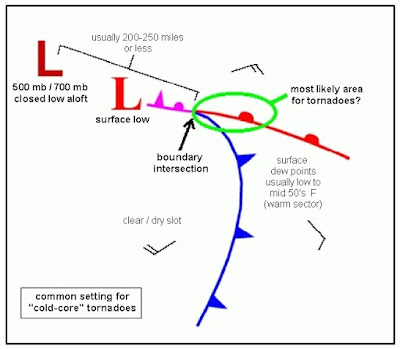 In the April 22nd case, the warm front was moving eastward instead of northeastward, due to orientation of the upper flow, and the tornadoes occurred along the warm front just southeast of the surface low. 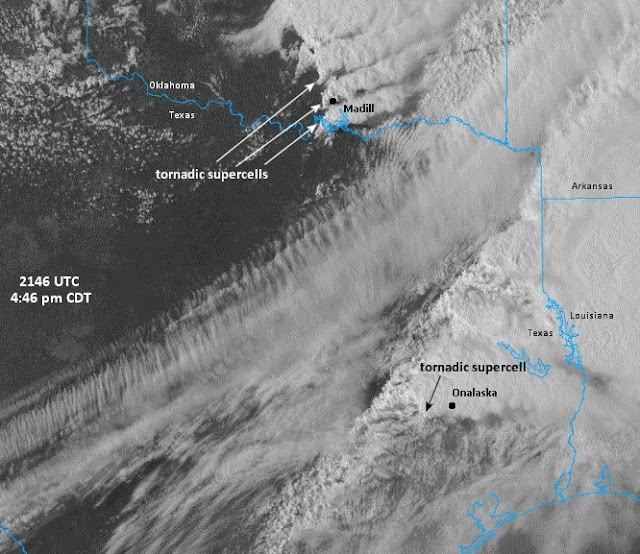 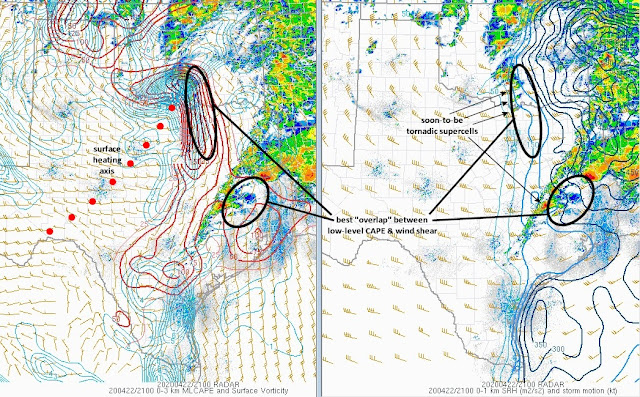 In the low-level CAPE field, you can see how narrow the moisture axis was over southern OK.  Often, narrow axes of moisture work against tornadoes because the storms "outrun" the surface-based moisture before relevant processes can work together to generate tornadoes.  But in the case of tornadoes associated with cold-core tornadoes, the low-level CAPE is so large that, if sufficient low-level wind shear or SRH is also present, low-level stretching within storms and rotating updrafts can occur rapidly, so that the narrow moisture axis is not a problem.  The fact that all this is occurring along an advancing warm front probably helps, too, because warm frontal boundaries are often good at generating tornadoes due to increased wind shear and warming/moistening air along them.

Another clue that the April 22nd case had some "cold-core" factors involved is some of the photos I've seen.  This one (by Maddi Frizzell on Twitter) shows the ending phase of the tornado northeast of Springer, OK: 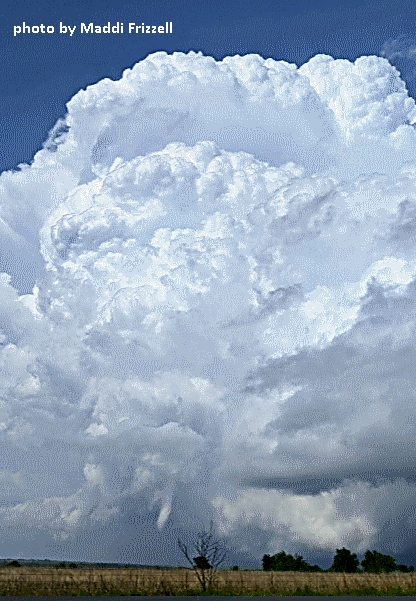 This image shows the full updraft visible, with the tornado at the very back edge of the storm, so typical of many cold-core tornadic storms.  Although the April 22nd supercells in southern OK weren't "mini-supercells" as in so many early spring cold-core events, they weren't especially tall, as this image shows.

A final note: Another tornado from the same tornadic supercell that killed 3 people near Onalaska, TX also killed one person in Louisiana (LA) south of Alexandria during the evening.  Yet another person died in Louisiana after being swept into a drainage ditch filled with rushing water.

A very interesting case to study, although I'm sad to hear of the deaths in OK, TX, and LA.  We'll see in the coming days what intensity ratings the National Weather Service gives the various tornadoes on April 22nd.