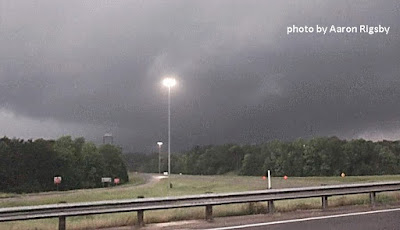 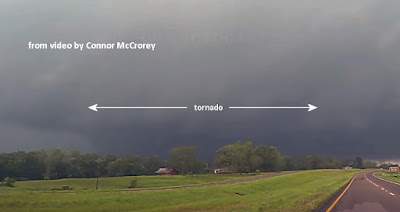 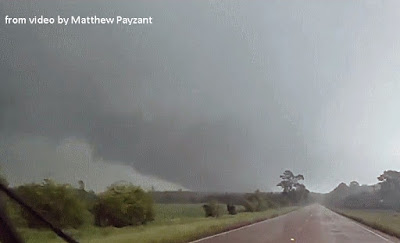 Easter's big outbreak of tornadoes (see the scary photos above in southern Mississippi)  caused 29 deaths due to tornadoes across the southern and southeastern U.S. that I've been able to confirm online (updated as of 4/15/20), and several others from falling trees and flooding.  Sadly, here's a list of tornado deaths so far by state:

The outbreak started on Easter at mid to late morning in northern Louisiana (LA), including an EF3 tornado that struck Monroe LA.  It progressed through MS during the afternoon, and tornadoes then developed into Alabama and northern Georgia during the evening, and across South Carolina in the early morning hours before dawn.  Many tornadic supercells were embedded within lines, and the number of warnings (> 140 within a 24-hour period) came close to the April 27, 2011 super-outbreak.  But thankfully, there weren't as many tornadoes and deaths as with that historic outbreak, nor were most of the tornadoes as strong.  Yet 29 deaths from tornadoes is unfortunate.

Another characteristic in common with the April 27,2011 outbreak was the degree of low-level wind shear and instability, which were quite large over a big area.  Going back to my work with Bob Johns in the 1990's, here are low-level shear (SRH, or storm-relative helicity) and instability (CAPE) combinations on Easter Sunday (red dots) from RAP model soundings representative of areas where tornado deaths occurred.  I've plotted these on top of a scatterdiagram from our study of 1980's tornadoes that was used to develop the energy-helicity index (EHI), still used today in forecasting: 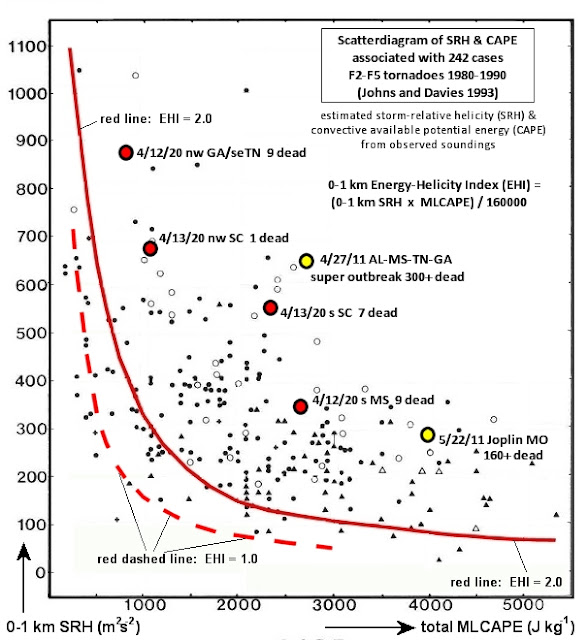 The biggest and strongest tornadoes on Sunday (see tornado pics up at top) were in southern MS deep within the warm sector at mid to late afternoon with two large semi-discrete supercells moving parallel to each other from northeast of McComb MS, to northeast of Laurel MS.  Two tornadoes from the southernmost supercell were rated EF4, one near Salem to near Bassfield MS, and another from southeast of Bassfield to areas past Soso and Heidelberg MS (this tornado was 2 miles wide at one point!).  These two tornadoes killed 10 people.  A 2nd supercell paralleled that supercell to its northwest, producing a very long-track EF3 tornado (path > 90 miles).

Here's the RAP model 1-hour forecast sounding near Laurel MS while tornadoes from these two supercells were in progress to the northwest and northeast: 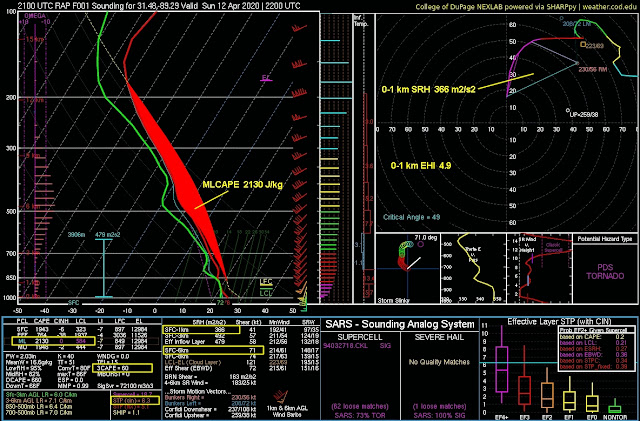 The SRH and CAPE combinations (350+ m2/s2 and 2000 J/kg) were typical of strong or violent long-track tornadoes in the Plains, so it isn't a surprise that two of the tornadoes were violent in intensity. 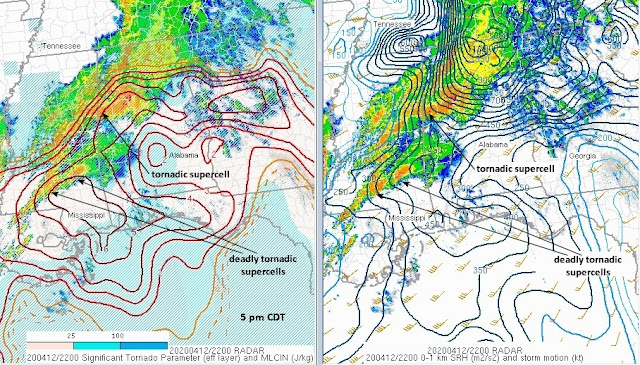 As on the RAP sounding above, the STP values were large (> 6.0) over southeast MS, and SRH was also large (300-400 m2/s2), all supportive of strong or violent tornadoes with the supercells indicated.

Here's a different RAP sounding, this one in northwest Georgia near Dalton during the evening near the warm front where two separate tornadoes killed 10 people total (Murray County GA, EF2, and just east of Chattanooga over the border in TN, EF3) : 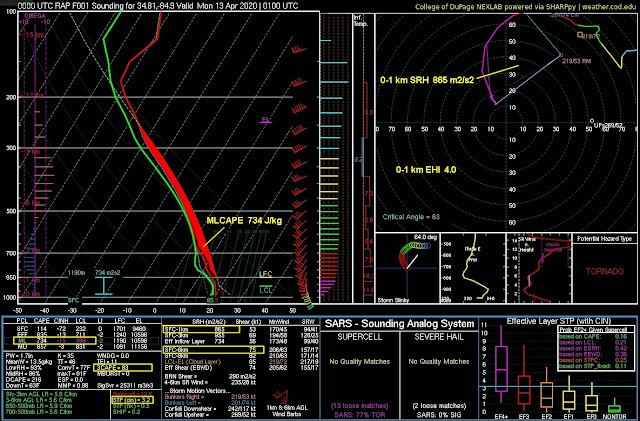 Notice how different this one is compared to the southeast MS sounding!  The SRH was huge,  > 850 m2/s2 (!), but the CAPE only 700-800 J/kg.  This is a reminder of how SRH and CAPE can work together in many different combinations to help generate deadly tornadoes.

Now a look at the bigger picture... below are 500 mb forecasts (midlevels of the atmosphere) from the NAM model run on Easter morning showing features at 4 pm CDT (1st graphic, click on it to see full size) and 4 am CDT the next early morning (2nd graphic).  Inset on both graphics in the upper right hand corner are 0-1 km energy-helicity index (EHI) forecasts from the NAM at the same times (see the scatterdiagram earlier to see how EHI is computed): 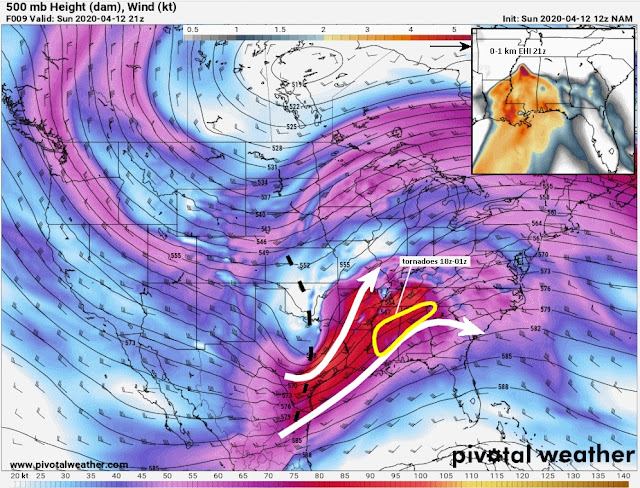 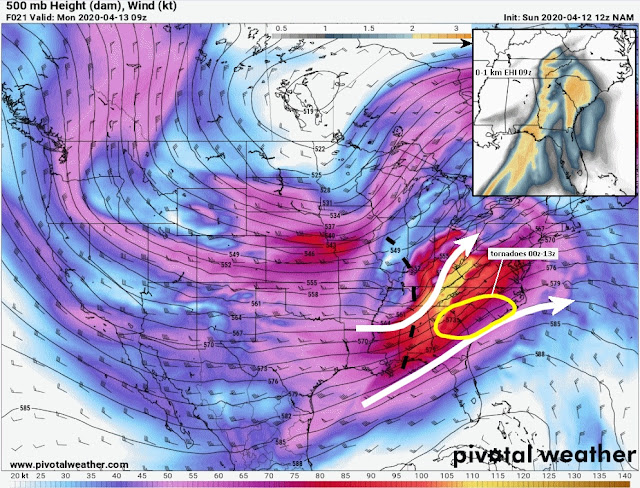 Notice the strong shortwave (thick black dashed line) that was moving through the large longwave
trough over the central U.S., providing strong lift as jet stream winds "spread" (thick white arrows) ahead of it moving east and northeastward across the South.  Also notice how much of the southern and southeast U.S. was "overrun" by sizable SRH-CAPE combinations ahead of this shortwave trough, as indicated by the inset EHI forecasts, setting the stage for a potentially deadly tornado outbreak:

Compare this 500 mb pattern to the one associated with the Nashville tornado in early March, which was a more localized tornado setting.  There's quite a difference in breath and orientation of the two different systems!

It is also interesting to note that tornadoes on Sunday and early Monday occurred largely between the surface warm front (see NWS surface maps below at 6-hour intervals), and the southern "branch" of the fanning jet stream at midlevels (thick white arrow) superimposed from the 500 mb graphics above: 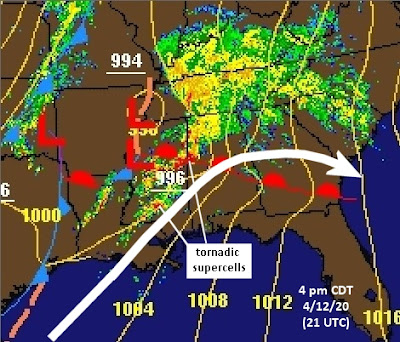 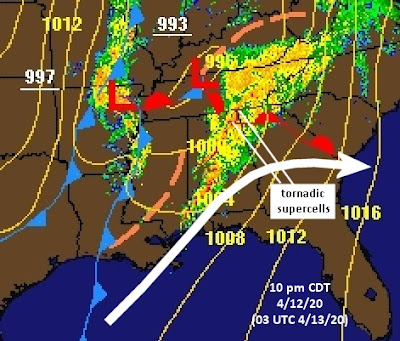 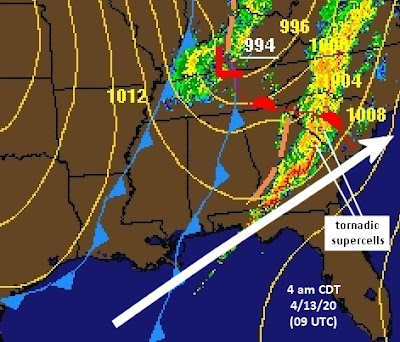 In a broad sense, this is typical in most outbreaks, with that southern branch of the spreading jet pattern defining the southern extent of tornado activity.

Most tornadoes on Easter weren't very visible due to supercells embedded in lines, or the tornadoes occurring at night.  But here's a photo of a tornado that happened around noon in west-central MS northwest of Yazoo City... this is how the Monroe, LA tornado might have appeared had it been somewhat visible within the rain: 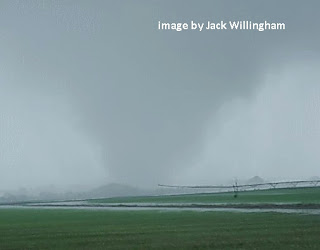 A few final comments:  SPC forecasters did a great job forecasting this outbreak and getting information out to the media several days in advance!   That probably saved some lives.

Also, I have to shake my head a bit at the number of storm chasers traveling long distances to see tornadoes in the middle of a historic coronavirus outbreak.  I know travel isolated in a car is probably relatively safe, but contact at convenience stores, gas stations, and hotels seems risky and a little questionable.

Chaser behavior was also an issue again on Sunday, with video showing two chasers driving the wrong way on one side of an interstate in MS to get around traffic slowed/blocked by debris!  And in another video in east-central MS, two chasers appeared to be following a large and difficult-to-see rain-wrapped tornado, driving into what appeared to be the back edge of the tornado circulation where tree tops were bending almost horizontal at road side!  That seems too dangerous, and can leave a bad and misleading impression on viewers.

Anyway, I'm grateful that the death toll on Easter and early Monday wasn't greater, and for the job that forecasters and media did this past weekend.  Stay safe and healthy, everyone!

Jon, thank you for a very interesting and informative account. I remember seeing that the 850 mb winds were veered. In my experience, SE or S 850s seem to produce more photogenic tornadoes. I really appreciate your examination of recent tornado events. Bill Hark

Great comment... I haven't thought of that, it's something I need to check out. The 850 mb winds were certainly xomewhat veered in this case, moreso than on April 27, 2011, which had a number of more photogenic tornadoes. Hmm...

I hope you have recovered from your bout with the coronavirus. And again, thanks for the comments!