The tornado that struck Eureka, Kansas on Tuesday evening (see video image above) occurred without a watch, and though the storm was tornado-warned, it was with little or no lead time.  Unfortunately, 8 people were injured, and this event was something of a "surprise."

Severe weather forecasting often gets more difficult as summer moves in because weather systems and their ingredients are more subtle, and the atmosphere is already unstable across much of the U.S.  In that context, this post is a brief analysis suggesting some ingredients that appeared to contribute to the tornado.

Storms that formed over eastern Kansas and Missouri around midday on June 26, 2018 moved southeast as a large complex of thunderstorms, leaving an outflow boundary trailing back into southeast Kansas by late afternoon (see black circled area on the surface map below, around 6:00 pm CDT): 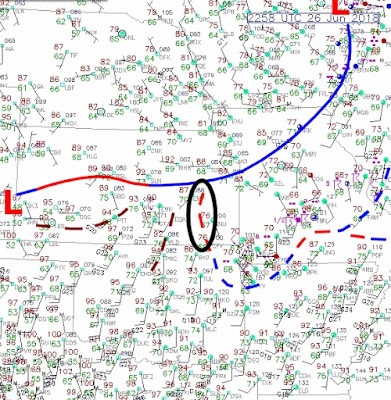 This boundary could also be seen from careful examination of visible satellite between 6:40 and 7:05 pm CDT (see white arrows below):

On the images above, a severe storm in progress was just northeast of Wichita, Kansas, but the developing Eureka storm could be seen (barely) on the last image at the east edge of the anvil of the ongoing storm farther west (see black arrow on 2nd image above).  Notice that the Eureka storm's location appeared to be essentially right on the aforementioned outflow boundary, compared to the storm closer to Wichita.

To see how rapidly the Eureka storm developed, look at these high-resolution satellite images zoomed in on southeastern Kansas at 4 minute intervals between 6:50 pm and 6:58 pm CDT: 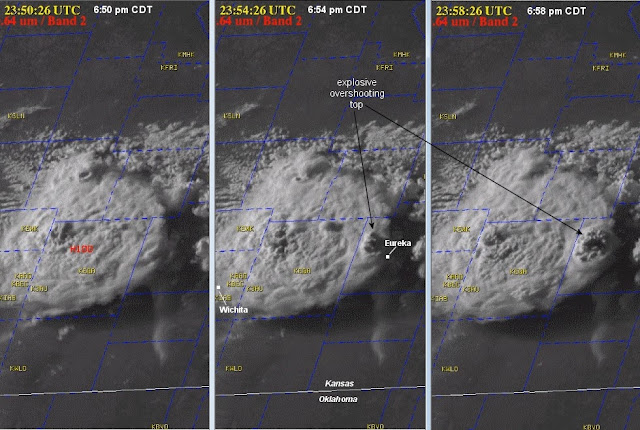 As it punched through the eastern edge of the ongoing anvil to its west, the rapid growth of the Eureka storm's overshooting top (see black arrows above) was quite impressive, in an environment.where instability was large (MLCAPE > 3000 J/kg, not shown).  Radar images from Wichita also show this rapid development, with notable rotation developing in the storm barely 30 minutes into its life cycle:

The tornado formed about 7:18 pm CDT, and was photographed from the nearby countryside by local resident Gary Williams as it moved east (see image at the top of this post, as well as the two below). The mesocyclone became wrapped in rain (see 2nd image below), which may have hidden the tornado, and could explain why more photos of the tornado haven't materialized.

Why did this significant and destructive tornado develop with this particular storm, and not with the picturesque and striated evening supercells back to the west?  (See the image below by Ken Engquist near Wichita a little later in the evening.) 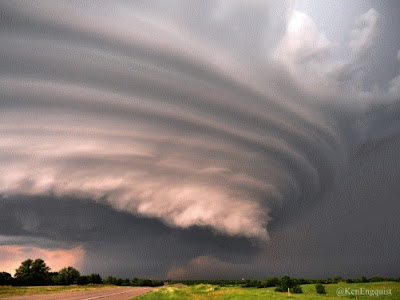 Going back to the earlier surface map and 2-panel low-res satellite image near the beginning of this post, it appears that the Eureka storm developed right on the trailing outflow boundary from the storms earlier in the day.  A common theme with my occasional blog posts this year has been that tornadoes tend to be associated with boundaries in unstable settings where wind shear, along with other ingredients supportive of tornadoes, tend to be maximized.

Below are panels from the SPC mesoanalysis showing low-level wind shear (storm-relative helicity or SRH), as well as low-level CAPE/instability, and the energy-helicity index (EHI), a parameter that highlights areas where both instability and SRH may be supportive of tornadoes should storms develop within that environment:

Notice that the low-level wind shear (SRH) was maximized along the outflow boundary over southeast Kansas, and that there was some CAPE below 3 km on the west side of the outflow boundary near the developing tornadic storm.  This suggests an unstable surface-based environment near the Eureka storm, also important (in addition to wind shear) for supporting significant tornadoes.  The resulting energy-helicity index in the 3rd panel above was also maximized near and west of the boundary near the Eureka storm, suggesting support for supercell tornadoes.

It is impossible to say exactly why the Eureka storm was tornadic, and why the others were not (a very brief rope tornado did occur northwest of El Dorado, Kansas around 5:30 pm CDT).  But the presence of the trailing outflow boundary matches well with the location of the Eureka storm, and that certainly could have had some influence on that storm producing a significant tornado. 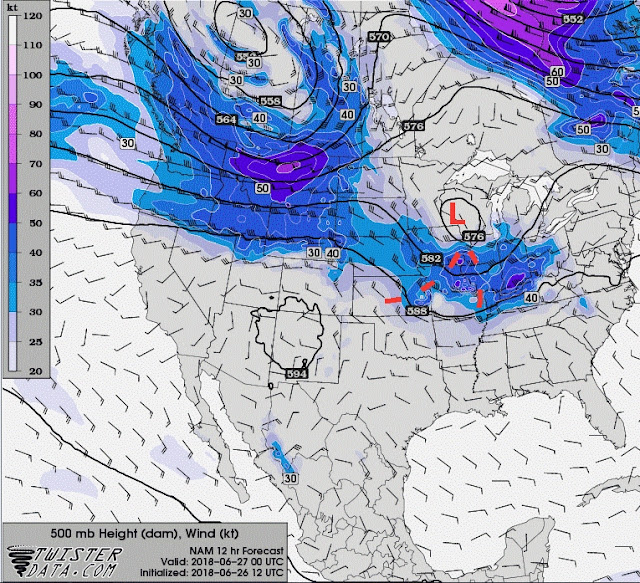 This was on the back side of a closed upper low over Wisconsin (this same low helped to produce other tornadoes in southern Wisconsin and northern Illinois on June 26).  The shortwave disturbance helped provide lift for generating the evening thunderstorms in the unstable air over the southeast quarter of Kansas, and the stronger winds aloft associated with this disturbance (around 40 kts) also helped to support supercell storms in this setting.

So, while the tornado potential over southeast Kansas was not easy to forecast on June 26, 2018, a careful analysis of ingredients and features in the 1-2 hours before the Eureka event shows several factors coming together that might support a significant tornado or two. This was particularly true along the outflow boundary where the Eureka storm developed explosively.

An interesting fact:  Eureka was hit by another EF3 tornado just 2 years ago, in July 2016 !

Excellent discussion, Jon. Thanks for posting.

Thanks for the feedback... interesting case, for sure.

Great stuff as usual. Hope all is well.
Mike Berger

This website is known as a stroll-by for all the info you needed about this and didn’t know who to ask. Glimpse here, and you’ll positively discover it. online casino real money

This site can be a stroll-via for all of the information you needed about this and didn’t know who to ask. Glimpse here, and also you’ll definitely uncover it. free online casino slots