Last week, on Monday, June 11, my wife Shawna and I were able to get away from family health and caregiving issues in Kansas City for an afternoon in eastern Nebraska, our first chase since May 1.  We saw what appeared to be a brief tornado northwest of Omaha, but more importantly, we witnessed a damaging downburst (see diagram and image above) crossing into southwest Iowa north of Nebraska City.  It's been an extremely busy week, so I'm just now getting around to doing a post about this interesting event.

We were heading south on I-29 around 7:00 pm CDT (0000 UTC) to get back to Kansas City, thinking we could outrun a supercell and developing squall line on the west side of the Missouri River.  As we drove south, we were surprised to see the storms rapidly and unexpectedly bow swiftly eastward, crossing I-29 in our path with winds in the 80-90 mph range (an 88 mph gust was recorded near Thurman, Iowa).  This wet bowing downburst felt very much like being in the eyewall of a hurricane, and several semi tractor-trailers were overturned on I-29.   Damage to trees, roofs, and buildings was also reported from near Union, Nebraska, to Thurman and Sydney, Iowa.

Here's an image from Shawna's video of the developing squall line as it overtook the supercell to our west shortly before 7 pm CDT (0000 UTC): 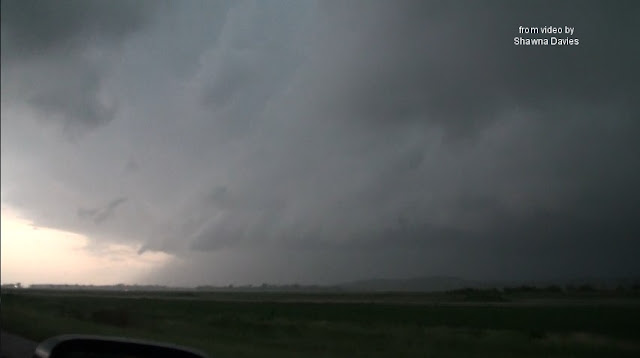 And here are video capture images of the downburst racing across I-29 in front of us, looking south:

These images were at roughly 10 second intervals during a 30 second period just after 7 pm CDT (0000 UTC), and the arrows mark the leading edge of the precipitation-laden downburst, showing just how fast it was moving and accelerating! 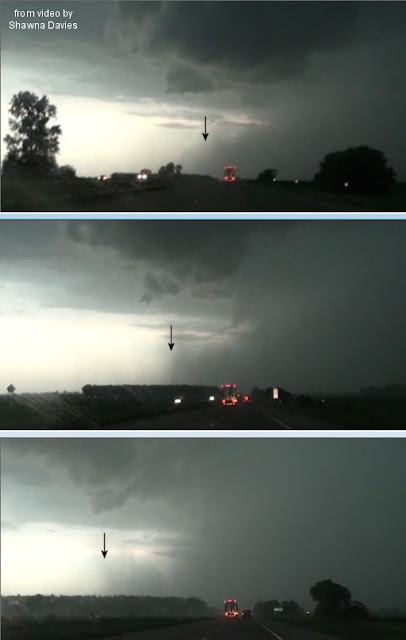 These next two images shows how conditions became almost "white-out" as the rain and wind engulfed us: 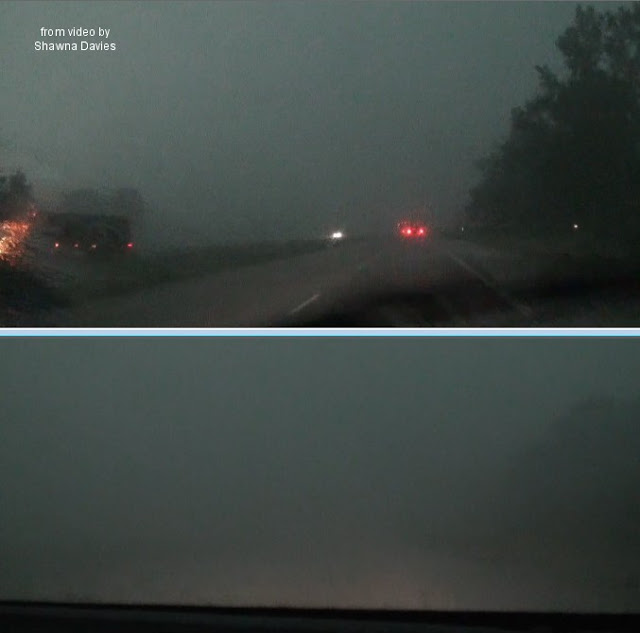 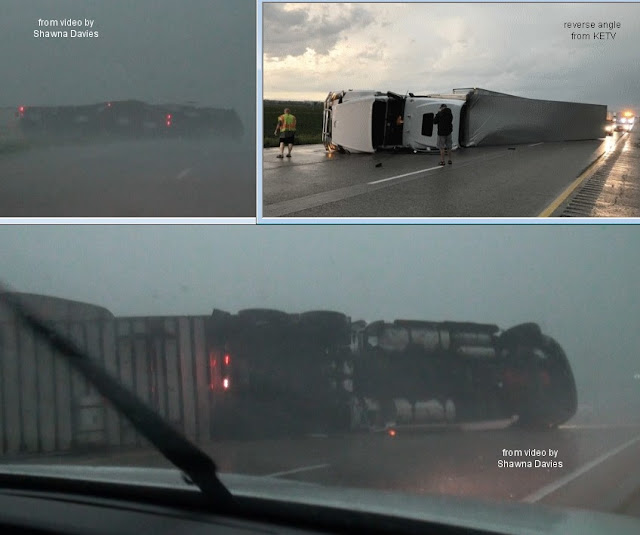 In pouring rain and strong winds, Shawna jumped out to see if the driver was all right.  Anyone who is acquainted with my wife knows that she has a passion for helping out and knowing what to do after destructive weather and before first responders arrive.

A level-headed Quik Trip truck driver also stopped beside us, and helped pull the semi driver out of his cab.  Shawna brought him over to our vehicle, where we could see a sizable gash on his arm and some cuts to his face from falling when his semi flipped over in the 80+ mph downburst winds.

We dug out towels to wrap his arm, called 911, and waited for help.  After a bit, a state trooper began directing traffic along the narrow side shoulder to squeeze past the blocking semi, and told us to go to the next exit to wait for an ambulance.  To save time, we decided to drive on down to Nebraska City, where Shawna took the injured driver into a hospital emergency room.  Thankfully, his injuries weren't life-threatening, and we resumed our journey home, wishing him the best after he called his wife.

Going back to look briefly at data from a meteorological standpoint, the downburst appeared to develop when a line of storms was building after 6:00 pm CDT (2300 UTC) along the surface cool front back to the west near Lincoln (see radar images below, base reflectivity at left, base velocity at right for 6:13 pm): 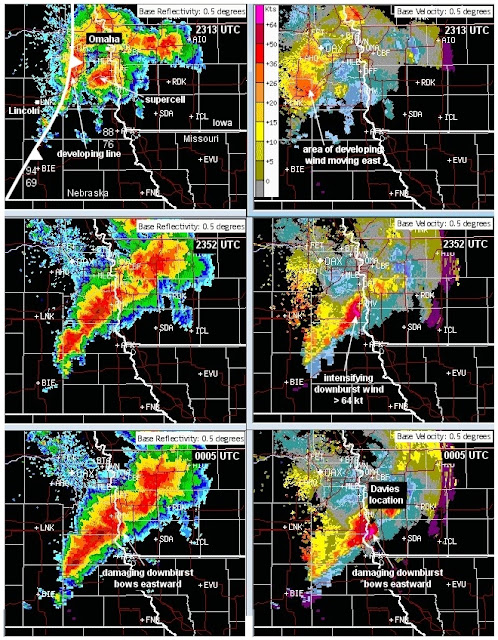 This was an area where there was both drier air aloft near the front, and a relatively dry layer below cloud base due to wide temperature-dew point spreads (see model sounding near Lincoln at 6:00 pm CDT / 2300 UTC below): 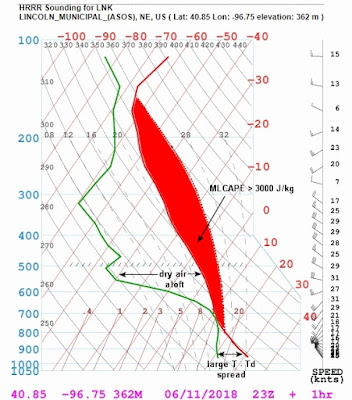 Evaporation from rain falling through such dry layers can cool already precipitation-laden air even more to generate strong negative buoyancy and accelerate winds downward and forward to create a downburst.

This line began to show an area of stronger low-level winds (go back to the radar images above at 6:52 pm CDT / 2352 UTC and 7:05 pm CDT / 0005 UTC), overtaking the supercell that had earlier produced some brief weak tornadoes south of Omaha, near Louisville, Nebraska.  This area then bowed very fast across the Missouri River to intercept our path as the corridor of strong downburst winds accelerated eastward.

An additional note:  Earlier in the afternoon, we did see something that looked like a brief tornado near Fremont, Nebraska,  but we did not hear of any damage from this feature:

This possible tornado was from a tornado-warned supercell near the intersection of the cool front and a residual outflow boundary from convection earlier in the day.

So, Monday, June 11 made for an unexpectedly interesting storm chase.  It sounds like there were no critical injuries (including the driver we took to the hospital), so we are very grateful!

Glad you're back posting these event summaries, John! Great stuff!