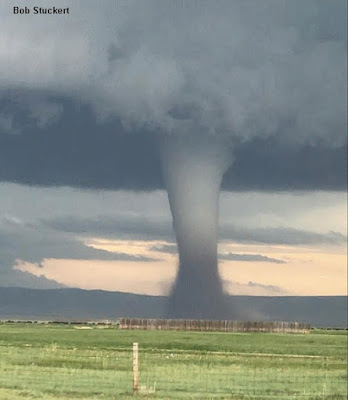 It's been an active two weeks regarding tornadoes in Wyoming!  First, several tornadoes, including a large EF2, occurred northwest of Cheyenne on May 27.  Then an EF3 tornado injured a couple people near Gillette on June 1, the first EF3-rated tornado in Wyoming in over 30 years.  And yesterday (June 6, 2018) produced yet another EF3 tornado north of Laramie that was very photogenic and on the ground for around 50 minutes over mainly open country.

It's interesting that the environment supporting this long-lived and highly visible tornado was not much evident, even shortly before the tornado.  As a result, it was very difficult to forecast (for example, a 2% or less tornado probability on 6/6/18 SPC outlooks), making it a tornado case intriguing to examine regarding the contributing ingredients and setting.

The surface map at 2200 UTC (4:00 pm MDT, about an hour and 45 mins before the tornado) showed a surface front dipping into northern Colorado with a low near Denver, and then arcing sharply back to the northwest across Wyoming: 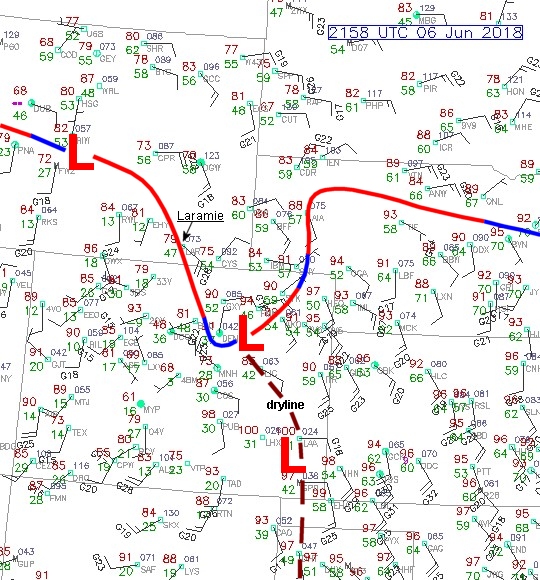 Notice that the Wyoming portion of this front was located near Laramie, and acted much like a dryline.  Warm, dry air was southwest of the front (surface dew points in the teens deg F), while relatively moist upslope air was in place northeast of the front where dew points were in the upper 40s and low 50s (deg F) near and east of Laramie on southeastly winds.

The tornadic cell started to develop around 2230 UTC (4:30 pm MDT, see arrow in satellite images below) in the convergence along this front near Laramie.  (The tornado developed at 2343 UTC, or 5:43 pm MDT.): 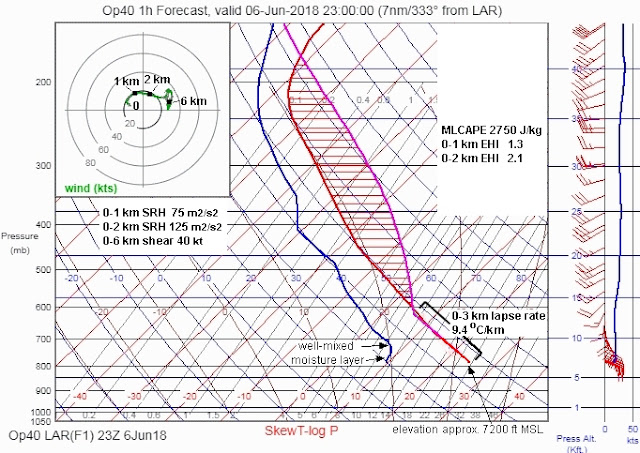 But with the sizable CAPE and no significant convective inhibition (CIN), and a very steep lapse rate/change in temperature (> 9.0 deg C/km) in the lowest 2 or 3 km, the stage appeared to be set for rapid upward parcel accelerations just above ground.  This would be particularly true given the high surface elevation (above 7000 ft MSL), and the mixed-layer moisture depth in the lowest 1 km, which would help reduce dry air entrainment and CAPE dilution as storm updraft parcels accelerated upward from near the ground.

In fact, checking surrounding model forecast soundings (not shown) at 2300 UTC, the Laramie profile had the best combination of steep low-level lapse rate, lack of CIN, and sizable CAPE over the southeast Wyoming and northern Colorado area near the surface boundary.  With nearly 40 knots of deep layer shear, and the frontal boundary likely enhancing the local low-level environmental shear, it seems that all these factors were able to support the Laramie storm as a well-structured and slow-moving tornadic supercell that was widely photographed: 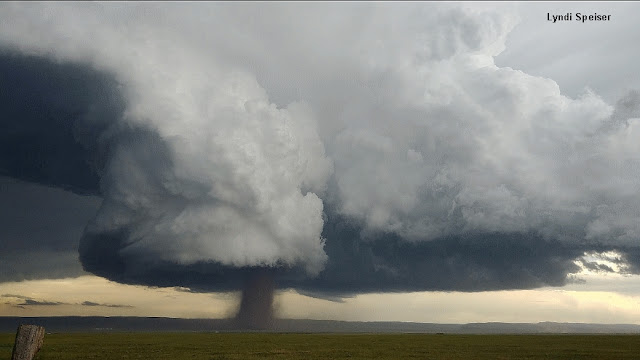 On the larger scale, the approach and passage of a short wave trough generating upward motion through the midlevels of the atmosphere helped with the generation and sustenance of storms near the boundary over Wyoming and Colorado.  This trough could be seen best on forecast models at the 700 mb level, marked below as a heavy dashed red line at mid-afternoon: 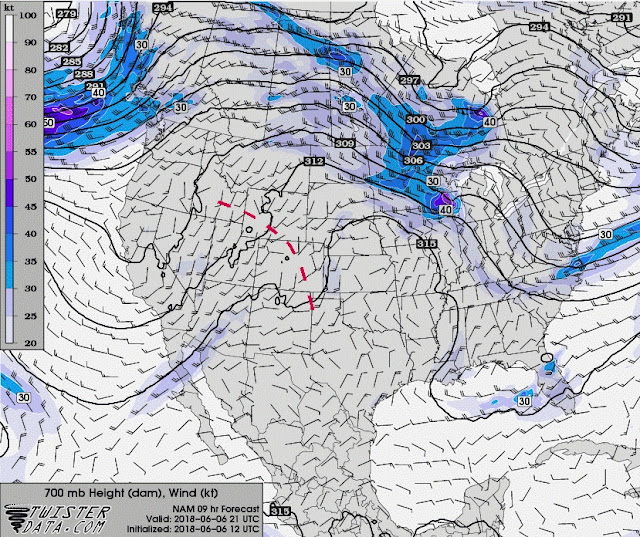 I'm hypothesizing here, but given the (at times) dusty "landspout" appearance of the tornado (see below), and the various ingredients/factors discussed above, the tornado may have resulted from a combination of both supercell (tilting and stretching of environmental shear) and non-supercell processes (upward parcel acceleration and stretching of vertical vorticity associated with a pre-existing sharp boundary):

The SPC mesoanalysis graphics below, within an hour before the tornado, illustrate the combinations of ingredients and potential processes.  The first two panels show low-level lapse rate (red lines), and surface vorticity (light blue lines), and suggest that the developing cell just north of Laramie was within a gradient of steep 0-3 km lapse rates, as well as a zone of strong surface vertical vorticity along the aforementioned boundary.  These are ingredients typical of non-supercell tornado environments: 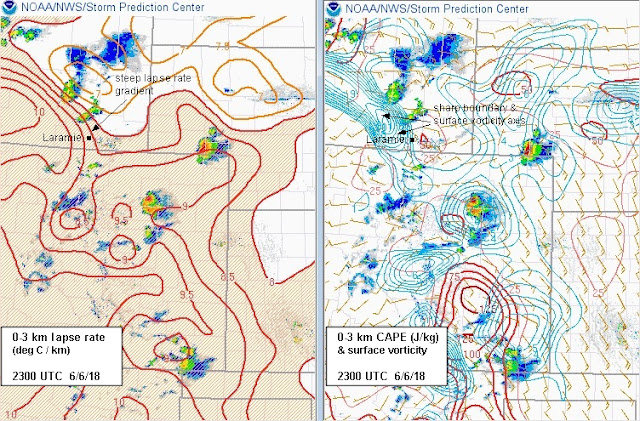 However, these next two panels show CAPE and SRH combinations via the original version of the energy-helicity index (EHI, green lines), and deep-layer shear (0-6 km bulk shear > 30 kt within the blue lines), ingredients typical of supercell tornado environments: 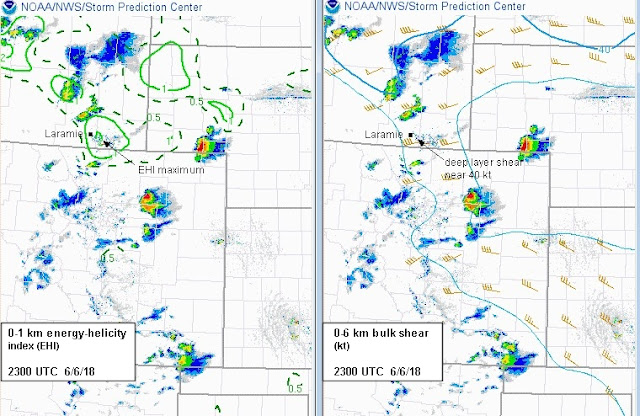 This convolution of localized ingredients suggests why this tornadic setting was so difficult to forecast in advance.  Most tornado settings that involve non-supercell processes are, by their very localized nature, essentially impossible to forecast, although an astute meteorologist may notice some of the ingredients coming together a short time before such an event.

A very interesting case to study!

A note: I haven't done any storm chasing or posted any blog cases in the past month, as my wife's mother has been in and out of hospitals and rehabs, and we're trying now to get her settled into a nursing home.  Family first.  But I'll keep an eye out for interesting severe weather cases to blog about as time allows.
- Jon Davies  6/7/18
Posted by Jon Davies at 11:06 PM

Bucking the mid level winds to me is the process that increases mid level storm rotation (mesocylongenesis). An obstacle to the flow through increased storm relative flow. The tornado itself is an artifact of low pressure under the meso,surface friction and convergence.

Awesome write up Jon. I speculated that some non supercell processes could have been at work here, glad to see you concur.

Fritz, thanks for your comment. Good point... with the 500 mb flow only around 25 kts, the storm seemed to stay rooted close to the boundary that helped to initiate it, so it was "bucking" the midlevel flow in a sense, which probably helped with generating and maintaining an intense mesocyclone. I've seen the same thing happen in other possible supercell/non-supercell process hybrid events, such as the Hutchinson KS EF3 tornadic storm in July 2015, and the 1997 Jarrell TX F5 tornado.

Thanks much, Matt... really appreciate your comment. Hope you are doing well!

John,
Thanks for the great and informative write-up!

Helpful and informative thanks for sharing

Very informative, thanks for taking the time to analyse weather events likes these.