A violent tornado close to home: The May 28, 2019 EF4 Lawrence-Linwood, Kansas tornado 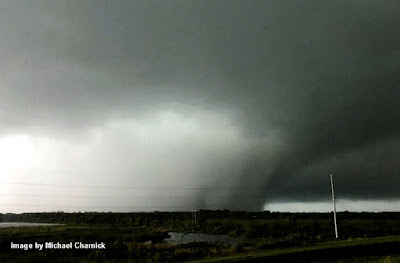 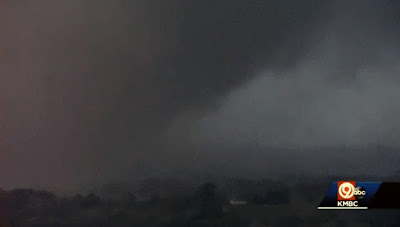 The third violent (EF4 intensity) tornado in the U.S. so far this year occurred on Tuesday May 28 near Lawrence, Kansas (KS) and west of Kansas City, Missouri (MO), not far from my home.  It was the first violent tornado to affect the Kansas City metro area since 2003, and sent my wife Shawna and our cats to the basement for the first time ever.

We were on a 3-day Memorial weekend trip to the High Plains of Colorado (our first multiple day chase trip in over 3 years), but awoke Tuesday morning in North Platte, Nebraska to find Kansas CIty under the gun.  So, instead of chasing north-central Kansas, we rushed back to Kansas City to check on family and cats, and found ourselves in our basement taking shelter not long after we got home.

The track map below shows how the tornado would have come close to our house had it not dissipated near Bonner Springs, KS.  We're extremely grateful that the tornado did not directly affect us or family members, but are sad for those near Lawrence and Linwood, KS (see photos of the tornado near those locations above) who lost property and homes.  Good warnings and media coverage undoubtedly saved lives, but 18 people were injured. 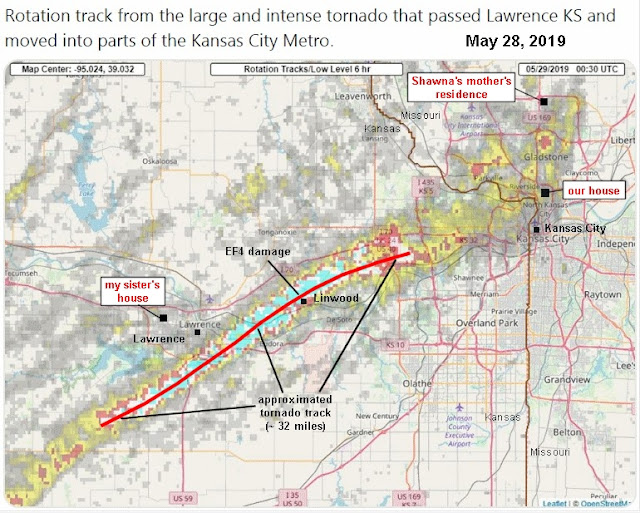 I've had several people ask me why the tornado was violent and long-lived (nearly 32 miles and just short of an hour on the ground).  The surface map at 4:00 pm CDT showed a stationary front (reinforced by earlier storms) draped acoss northeast KS and northwest MO, with the Lawrence-Linwood supercell taking shape near Emporia, KS (circled "S"  on map below), in the warm sector well south of the front: 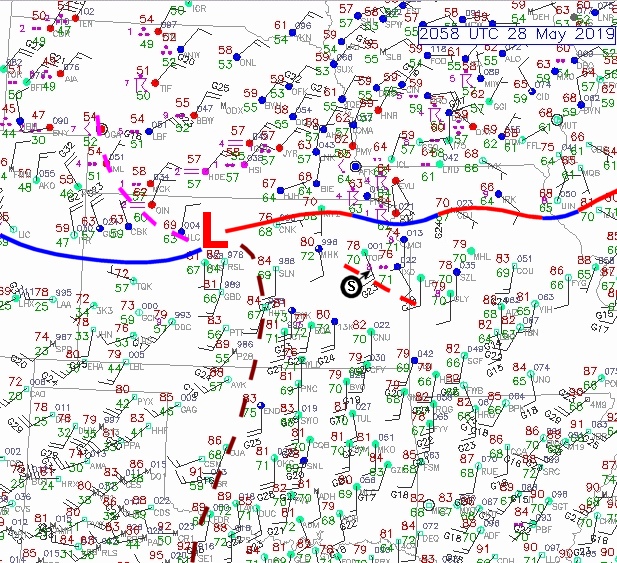 Computer model forecasts from the morning suggested that low-level winds and the low-level jet would strengthen over eastern KS during the day, nearly doubling in speed between noon and 7:00 pm CDT on NAM forecast graphics for 850 mb (roughly 5000 ft MSL): 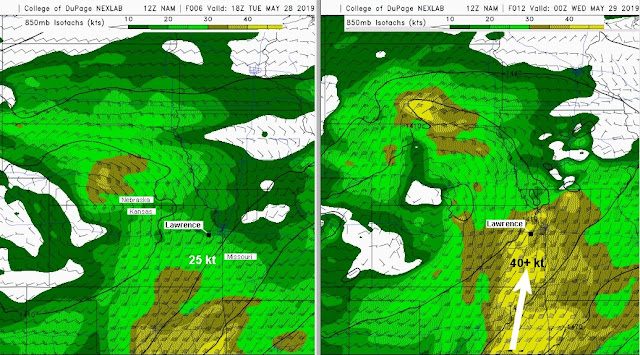 When we arrived home at late afternoon after passing through the front from north to south, we noticed that winds were strong from the southeast, which tended to confirm the model forecasts.  This in turn increased low-level shear, which combined with instability resulted in increasing energy-helicity index (EHI) values during the afternoon, supportive of significant tornadoes (compare the RAP model EHI forecasts for noon and 5:00 pm CDT below): 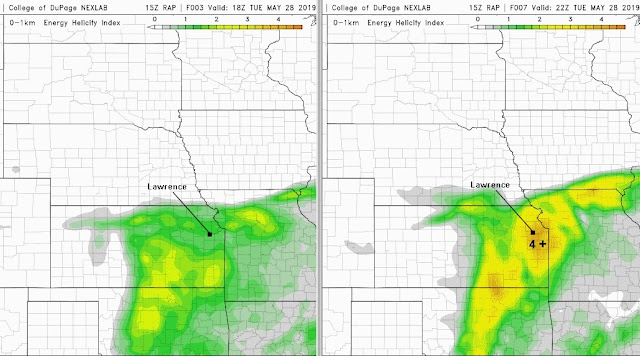 Typically, the low-level jet is at a diurnal minimum in speed at late afternoon in late spring. But on May 28, a strong upper system (see the NAM 500 mb upper air forecast in midlevels for 4:00 pm CDT below) was lifting northeastward through the Plains.  The increasing low-level jet and 850 mb flow was in response to this strong dynamic system: 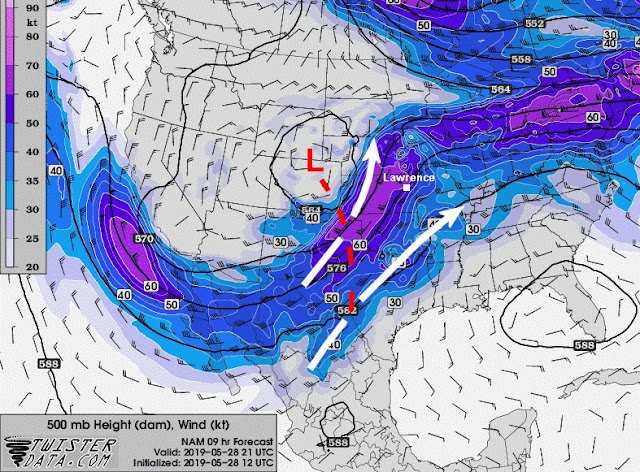 Going back to the surface map earlier, notice the backed southeast winds at Topeka (TOP) and Olathe, KS (IXD).  That further increased the low-level wind shear ahead of the soon-to-be tornadic supercell, and likely helped it to produce the large tornado long before it interacted with the front farther north. 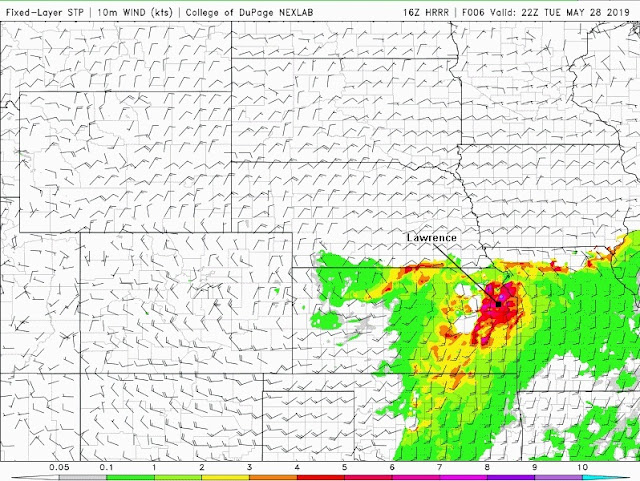 A dangerous aspect of this violent tornadic supercell was that it was very HP (high-precipitation) in nature, wrapping the large tornado in rain, making it difficult if not impossible to see.  The views of the tornado at the top of this blog post are from the north or northwest looking toward the south or southeast, where the back edge of the tornado was sometimes visible.  However, from the east, northeast, or southeast, a large rain-wrapping shield hid the tornado, as in this view toward the west or southwest from Highway K-10 east of Lawrence: 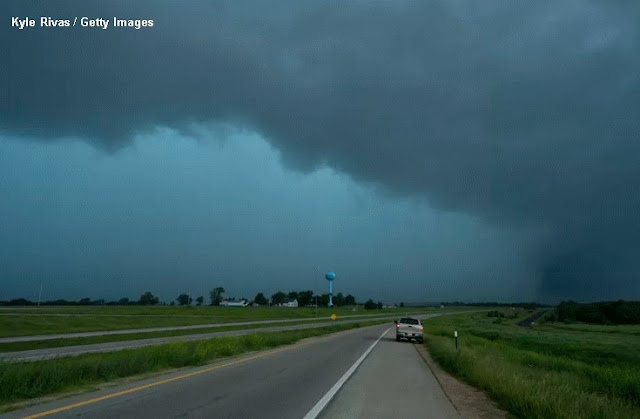 The experience Shawna and I had with the El Reno tornadic supercell back in 2013 has forever made me very leary of HP supercells, so much so that I now always put lots of distance between me and such storms.  In fact, I tend to avoid chasing them.  That's because HP supercells are so difficult to view and assess both storm movement and structure, not to mention any tornado, which is truly frightening.

A related dangerous factor of HP storms is the rain-filled rear flank downdraft (RFD) that often surges and wraps around the tornado from the south and southeast.  On the radar reflectivity images below just after 6:00 pm CDT, notice how the wet RFD surges eastward on the south and east side of the tornadic circulation.  If trying to stay with the storm by stair-stepping eastward and northward, it is not unusual to have this surge overtake you, as can be seen along north-south Highway 59 south of Lawrence in the images below: 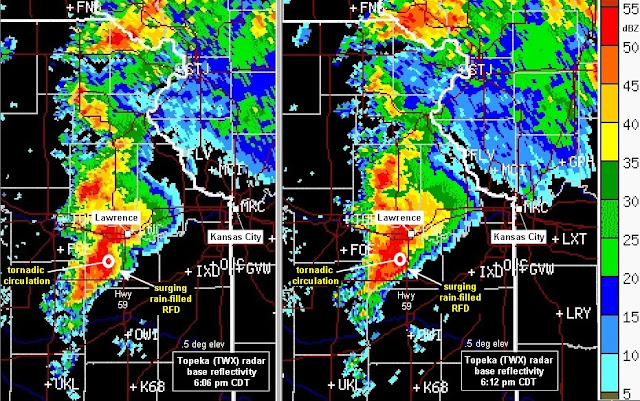 My experience in the field is that rain-filled RFD surges are often strong wind producers (apart from any nearby tornado), as with the 2013 El Reno tornadic storm where we nearly got blown off the road retreating south of the intensifying and rapidly expanding tornado.

I've seen a couple videos of chasers following the May 28 Lawrence-Linwood tornadic storm way too close, hooping and hollering while surrounded in blinding rain and seemingly oblivious to the danger near them.  I used to do stupid stuff when I was younger 25-30 years ago, but experience and maturity in recent years has taught me to give these storms a very wide berth, even if it sacrifices the chance to view a large tornado.  I fear that more chasers will get killed in future years on HP-type storms of this nature.

It is truly miraculous and awesome that no one got killed with the May 28, 2019 Lawrence-Linwood tornado.  That is something to celebrate.

Nice write up Jon and I agree completely. This storm had echoes of "El Reno" with it's HP storm mode. I don't like these types and usually avoid chasing such hazardous events. Give me a classic or LP storm anyday! Take care and maybe we'll catch up again out in the field or Chasercon!

Thank you Jon for such an informative write-up. My friends and I chose not to chase NE Kansas for that reason and being in a populated area. We should have gone for the Tipton area, but instead intercepted a storm coming out of Wichita that didn't do anything significant. Bill Hark.

Jon,
Thanks for the detail write-up. We saw way too many wet storms on our trip.

The day of the Lawrence storm, we were enroute back to Phoenix. But, being from Lawrence, I sure did follow the coverage afterwards! It went through my old stomping grounds.

As an aside, it seems that we end of up NE Kansas a lot less often than in the past. I last went to Lawrence on a chase sometime around 2010, but we used to drop in on my parents there regularly during chases, without driving far out of the way.

Another excellent write up by Jon! Well done! Hindsight says I wish I would have chased that day up near Hays to Tipton and east.