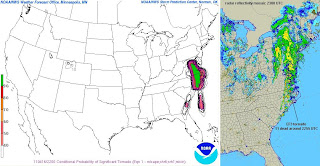 The tornado outbreak last Thursday-Friday-Saturday across the south central into the southeastern U.S. and mid-Atlantic states was pretty eye opening (see photos above). Sadly, more than 30 people died in tornadoes, and there were at least 45 deaths over all from a very strong severe weather system on a 3-day tear.

Why so big an outbreak? The 500 mb forecast charts above show a dynamically intense, broad trough in the mid-levels moving from the central into the eastern U.S. during those 3 days, providing plenty of upward "forcing" in the atmosphere. Most of the tornadoes occurred toward the southern end of the system with plentiful moisture (not shown) available from the Gulf and Atlantic.

Also on the 500 mb maps above, notice how the mid-level flow intersected the blue lines of storm initiation and orientation at a larger angle toward the southern end of the activity each day, often around 70 deg rather than 10-30 deg seen father north. This orientation of the mid-level flow aloft relative to the surface activity tended to make for more discrete and individual supercells in those areas, probably helping the generation of tornadoes. Low-level storm-relative helicity (SRH, not shown) was also very high in these areas, with values of 600-700 m2/s2 (!!!) from AL to NC during the last 2 days of the outbreak. This helped to support strong tornadoes in environments where MLCAPE was less than 1500 J/kg.

A new guideline parameter outputting estimated conditional significant tornado probabilities for more discrete supercells, developed by Bill Togstad (NWS Minneapolis, retired) from a large database of mine utilizing parameters from RUC soundings, performed fairly well in real-time during the outbreak (see last 3 images above). Given that many supercells tended to be discrete on the southern end of this outbreak, the stronger and more deadly tornadoes were mostly associated with probability values of 70-90% or more, as can be seen in the examples above. Along with the size and orientation of the broad upper trough, this suggested very favorable tornadic environments over large areas as the outbreak progressed eastward during the 3 day period.