An Essay: Gustnado or Tornado? 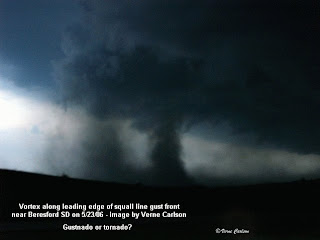 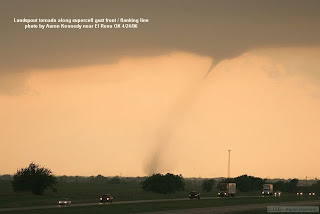 My analysis (previous blog post) of the setting for Sunday's "gustnado" on 4/3/11 near Perry KS stirred up different reactions and opinions as to whether Sunday's vortex actually was a "tornado" or not. Nature certainly defies categories made by man, and there are definite gray areas in classifying tornadoes and small-scale atmospheric vortices.

Sunday's "gustnado" was not associated with a mesoscyclone. But a "landspout" (a non-supercell _tornado_ according to the AMS glossary) isn't associated with a mesocyclone, either, and is considered a tornado because the vortex (along a nearly stationary or slow-moving boundary) extends well up into the cloud of the parent thunderstorm, with dust typically extending in a vertical column all the way to cloud base, often under a condensation funnel aloft. Gustnadoes always occur along thunderstorm gust fronts and are more shallow; the AMS glossary definition also categorizes them as "weak" and "short-lived".

To my way of thinking, landspouts and gustnadoes are somewhat similar: They both develop from vertical stretching of an area of slow "spin" or vorticity along a boundary, tightening that into a stronger more well-defined vortex. More prolific landspout and gustnado days also feature a steep lapse rate near the ground that enhances vertical stretching as a result of strong surface heating, similar to days where multiple dust devils form over dirt fields from rapidly rising thermals.

The main difference between landspouts and gustnadoes seems to be the depth of the circulation, and the type of boundary they develop on. True landspouts (one type of non-mesocyclone tornado) tend to develop with thunderstorms on pre-existing stationary or slow-moving wind shift boundaries that are somewhat more "straight" in the vertical where the tightening circulation can extend to greater depths and last sometimes for tens of minutes. In contrast, gustnadoes always develop on gust fronts, typically faster moving boundaries that are more "curved/sloped" in the vertical, so that the tightening circulation can't extend/stretch as deep and is more transient as the gust front moves/advances. See the diagram above that attempts to illustrate this difference.

But.... what if there is a gust front that is not particularly fast-moving and maybe doesn't have so much vertical slope? What if a circulation that develops and stretches on that gust front persists for more that a minute or two, lasting maybe 5 minutes or more? What if it occurs under a high cloud base (for example, above 2000 meters) where it is difficult to see how far the circulation extends upward? What if the circulation becomes rather intense (winds to EF1 intensity) and destroys a small farm building? Do we call this a "tornado"? What exactly is "shallow" and "not shallow", according to the subjective AMS definition?

In 2006, on May 23rd, an "outbreak" of gustnadoes occured along the gust fronts associated with a squall line from southeast South Dakota to south-central Nebraska, with many photos taken by chasers. Dirt from some of these extended dramatically to cloud base, with cloud circulation sometimes visible in the shelf above them (see Verne Carlson's photo above). NWS Sioux Falls called some of these vortices "tornadoes" in their local storm reports, while NWS offices in Nebraska did not (look up the SPC storm report log for 5/23/06). Here's another situation the same year, April 24, 2006: A supercell storm produced a mesocyclone tornado near El Reno, Oklahoma. Then, a few minutes later, a non-mesocyclone tornado occurred south along the supercell gust front (see Aaron Kennedy's photo above), which, with little temperature contrast, was barely moving and oriented more "vertical" than "sloped". This tornado had a well-defined condensation funnel with dirt extending upward to it and the clear appearance of a "landspout", even though it was technically on the storm's gust front.

From the above, you can see where man-made definitions and categories fail us, and how difficult it is in some situations to decide how to categorize an atmospheric vortex associated with a thunderstorm. I'll certainly admit that there may be a gray area about how to "categorize" Sunday's vortex. The apparent processes involved with the location of the circulation on a rather fast-moving gust front argue for calling the vortex a gustnado. But the high cloud bases and inconclusive photography regarding how far the vortex really extended upward in the vertical also muddy the waters regarding classification. So there's not a clearly definitive "answer", and we may have to accept that.

With the vortex persisting for awhile and doing some damage, I can see the desire to call such a vortex a "tornado", and I can't completely argue against that. If that were the only criteria, several "gustnadoes" this author has seen and reported were really "tornadoes". Had there been other tornadoes that captured the video spotlight on Sunday that were clearly supercell/mesocyclone in nature, I doubt that discussion would be so focused on this issue right now. For storm chasers, it is always more impressive to see what is categorized as a "tornado" than what NWS calls a "gustnado".

Arguing about how to categorize Sunday's vortex maybe misses the real point. Sometimes, there just aren't exact clear-cut answers, and nature certainly doesn't care what we call something. Perhaps we should just be aware and recognize that there are a wide variety of atmospheric vortices that we don't fully understand or know how to categorize exactly. For research meteorologists, my wife calls this "job security" :-).

John, great writeup, as usual. However, I differ on your opinion of the El Reno vortex of 24 April 2006, since I was there to observe it. The tornado in the picture was actually an anticyclonic pair to another cyclonic tornado up closer to I-40. The pictured tornado was associated with the southern bookend of the horseshoe-shaped updraft and not a landspout. In fact, it was the stronger of the two tornadoes based on damage surveys.

Also, we need to be careful about characterizing tornadoes based on their appearance. If a tornado is made visible only by a small condensation funnel and a long dust tube, it isn't automatically a landspout. Sure, that's how many landspouts appear on the High Plains, but many of the tornadoes along the sea-breeze convergence areas in Florida and along the Gulf Coast in summertime are also non-mesocyclone (landspouts). Those tornadoes occur in more-humid environments, and can easily have condensation funnels reaching the ground, even though they too are landspouts. And of course, there is the opposite - mesocyclone tornadoes that have short funnels and long dust tubes.

Agreed, and as a corrolary to this, I hate seeing the term "waterspout" used to reflect any tornadic circulation over water. A waterspout is analogous to Greg's landspout definition, and most commonly observed in the tropics (i.e. Florida, Carribean, etc..) due to sea breeze interactions or rapid heating and vertical stretching via towering Cu, most often observed during the late morning and early afternoon.

If a supercell and tornado pass over a body of water, I would maintain that this is a "tornado over water" vs. a waterspout which has already been assigned a non-mesocyclone definition.

I also agree that the presence of a condensation clouds wholly or partially visible to an observer should be stricken from this discussion.
-Evan Bookbinder

I think the biggest problem, no matter what is a tornado or isn't a tornado, is that people are way to quick to leave it at the generalized term(adding in "non-mesocyclone" doesn't sound as good, maybe?). No matter if it's a waterspout, landspout, supercellular tornado, or any other variation people will automatically label it a tornado and leave it at that. Then many times the simple term "tornado" will end up making it into the NCDC database when it should be broken out in many ways IMO. That's terrible for long term climatology.

Enjoyed the post! For those who are interested, here's the timelapse of the El Reno storm. I'll let you make your own conclusions. - Aaron

Point well taken. The El Reno case is probably not a good example to make my point, though the tornado did occur in a roughly similar location relative to the mesocyclone as Sunday's "vortex". I agree that we shouldn't categorize vortices by appearance, but more by the processes and ingredients that generate them. Thanks for the clarification and input.

The whole tornado-labeling thing is certainly a problem for climo records. Most gustnadoes I've seen are indeed short-lived and very weak. But how do you label/categorize one that has 5-10 minutes continuity and does EF1 winds, not precisely fitting the AMS defintion? The whole categorization thing is needed for scientific documentation, but also presents problems.

I wanted to add a little anecdote...

Some years ago I witnessed a gustnado in the AZ desert which lasted at least 15 minutes, was ~100 meters in diameter, and was observed by others from 20 miles away (we conversed on Skywarn ham radio). But it was *clearly* not a tornado - it was miles from the nearest updraft, in clear air and bright sunlight.

The desert helps make these things much more visible than in tornado alley.

Gustnados are definitely tornados. I say that because they occur on the gust front. The front side of a gust front is the updraft side and the back side is the downdraft side, with gustnados occurring on the updraft side. Just because the NWS cannot detect and measure them with current radar technology does not invalidate them as tornados since the knowledge does exist which proves they are tornados... a rotating column of air within an updraft is all that should be needed. However, the official definition of a tornado was re-written some time back to exclude such things as gustnados and the reason is because they're not large enough, destructive enough, nor long-lived enough to get meteorologists sitting in a boring NWS station excited. The meteorologists choose what they want to call a tornado based solely upon "does it excite me enough in some way" criteria, which is not the way of true meteorology. That's an absolutely absurd way to define things.

A bit late to the party but I'll throw my two cents in here.

The deciding factor is whether the vortex is connected to the storm updraft. You can definitely have tornadoes that form along the leading edge of outflow and are connected to the updraft region of the storm - in fact, this is the definition of a classic 'bow echo' tornado. Fujita depicts the tornado development well ahead of the storm's radar echoes, at the outflow / updraft interface.

Which brings me to your diagram. What you label as your gustnado case is actually more similar to the scenario I described above.

Gustnadoes do form along gust fronts but the difference is that they do not connect to the storm updraft, and are therefore confined to a shallow near-surface layer and are short-lived. It's also why they do not fit the definition of tornado. So your diagram should have a third panel with a shallow vortex forming well away from storm updraft region.