Tornadoes, Warehouses, and Factories - Can these businesses do better to keep workers safe?

(This is an essay/opinion piece my wife Shawna wrote and wanted to share here on my blog after last Friday's catastrophic and stunning tornado event in Kentucky, Illinois, Arkansas, Tennessee and Missouri. - Jon Davies)

(You can help Western Kentucky tornado victims by donating here.) 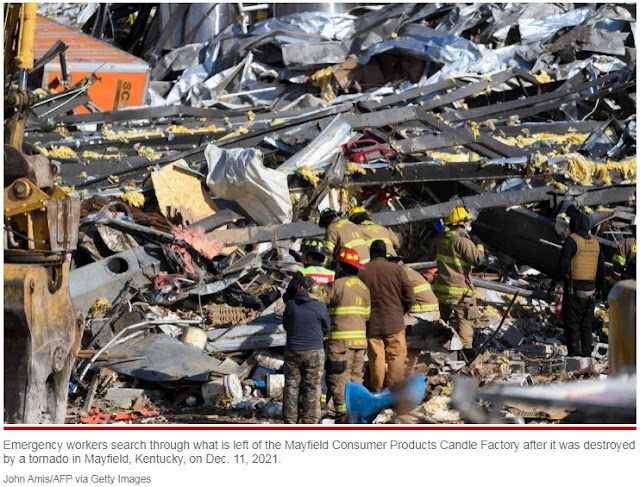 I was heart-broken watching the devastating tornado outbreak unfold last Friday night (December 10-11) in the central Mississippi River Valley area .  It was the most catastrophic U.S. tornado episode since the 2011 Joplin tornado and the 2011 Dixie Super Outbreak, and the deadliest tornado outbreak ever recorded in the U.S. during the month of December!

Kentucky bore the brunt of it, with at least 74 deaths in the state confirmed so far (the death toll may rise as there are still people unaccounted for), and additional tornado deaths in Illinois, Arkansas, Tennessee, and Missouri.  This outbreak included a tornado that would have had the longest track ever recorded (> 220 miles across parts of four states) except for a short break at one point in its path.  This tornado killed at least 57 people, and while officially rated EF4 intensity at this time, there were areas of damage that could conceivably suggest EF5 wind speeds.  Regardless, last Friday was a truly historic yet dark and sad day.

From a safety viewpoint in the future, is there anything we can learn from this event?

I want to focus on a couple locations:  First, the Amazon facility that was struck by a narrow but strong tornado (EF3) near Edwardsville, Illinois, killing six people (see photos below): 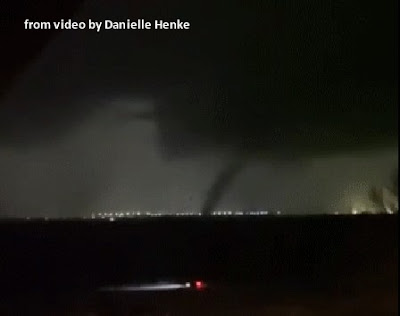 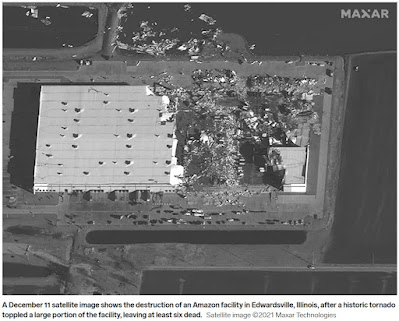 I'll also discuss the candle factory in Mayfield, Kentucky where eight people died when it was completely destroyed by the large long-track violent tornado (at least EF4 intensity) that tore through western Kentucky (see photos below): 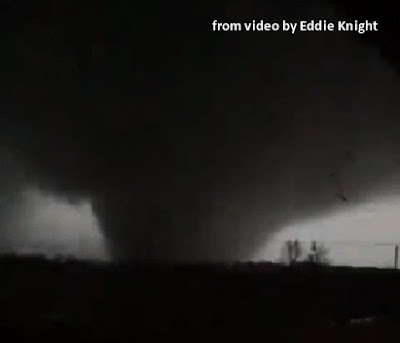 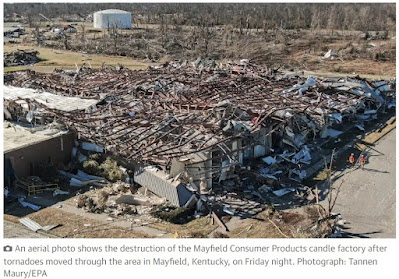 Both facilities had ample warning via NWS warnings, around 20 minutes lead time in each case.  The Amazon facility in Illinois, which is now being investigated by the federal government via OSHA regarding structural issues (see here), had no below-ground area or solid concrete floor-level safe rooms for the 40+ employees working on Friday evening.  Similarly, the Mayfield Consumer Products candle factory apparently had no basement or above-ground concrete shelters when the half-mile wide violent tornado struck, although employees were told to go to hallways and bathrooms.  Given the typical low-end construction quality of many such warehouse structures (most large industrial buildings are not designed to withstand extreme winds, with roofs often blowing off and adjacent walls collapsing), the lack of true shelters and safe rooms in these cases probably contributed greatly to the deaths.  That said, it was very fortunate that, of 140 total employees in these two cases, only 14 lost their lives.

For reference, here is a regional radar image (Edwardsville and Mayfield are marked) at about the time the Amazon facility was struck, and roughly an hour before the factory in Mayfield was hit: 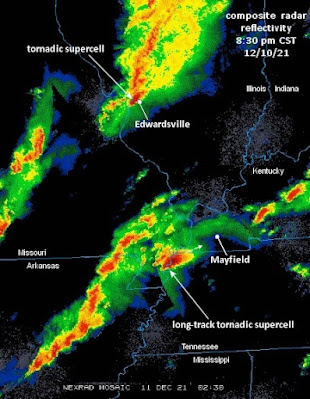 That two large industrial buildings populated with many employees were hit directly by strong and violent tornadoes on December 10 highlights sheltering and other problems in such situations.  It seems clear that large warehouse and factory buildings should be built or modified to have some sort of below-ground shelter or ground-level rebar-reinforced concrete safe rooms sizable enough for workers to evacuate to when tornadoes or strong winds approach.  Mega-profit companies like Amazon can surely afford to provide such shelters for their employees.

Other issues have surfaced in news stories about these two facilities (for example, see here).  One revolves around policies that don't allow employees at work to have cell phones (a good source for weather warnings and simple-to-view radar apps).   Such rules could be relaxed on days when severe weather is likely.  It would also seem very prudent for companies with many employees to have a designated manager to keep abreast of days when severe weather is possible, and to monitor warnings and radar for storms that might directly affect their location.

==>To illustrate, on December 10, Mayfield came under a late afternoon tornado warning that sent candle factory workers to halls and bathrooms for shelter.  That small storm (not shown) passed well south of Mayfield and produced no tornadoes.  However, three hours later when the mega-supercell with a confirmed large long-track tornado on the ground directly approached  Mayfield, there seemed to be confusion at the factory.  Some workers in interviews claimed that at least one supervisor threatened to fire employees who wanted to head home for shelter with 20 minutes of lead time before the tornado hit (see here).  A designated manager with some basic weather training and online or cell phone access to warnings and radar could probably distinguish between the two vastly different situations, and help make urgent and intelligent decisions to keep workers safe.

The last couple years have not been particularly active regarding tornado activity in the U.S.  But this violent and deadly December event is a strong reminder that severe weather and tornadoes can happen any time of year, and that we all need to stay aware.  Have a safe place to go in severe weather, stay alert, and keep your cell phone on and handy (particularly at night) when thunderstorms are in the forecast and severe weather may be possible.

On a positive note, I also want to say how impressed I am with the many people in media interviews who were well-informed and took the right action to protect themselves and their families as tornadoes approached last Friday.  Sheltering in interior bathrooms or closets with mattresses when there was no basement was a common action among survivors interviewed.

Unfortunately, when a violent (EF4 or EF5) tornado strikes, particularly when there is no below-ground shelter or safe room, even the smartest actions may not guarantee safety.  I'm paraphrasing here, but what I've heard legendary severe weather researcher Dr. Chuck Doswell say is very true:  "Tornadoes are going to occur, people just happen to be in the way."

Here is a 30-minute video that a crew of storm chasers with production experience and I produced several years ago about staying safe in tornadic and severe weather. I check this video periodically, and it still stands with accurate information (including workplace safety):

A little time spent watching this video and planning ahead may help save you and your loved ones' lives.  Let's all stay responsible, alert, and safe as possible!

(Update 12/16/21: After writing this article, our unusual and record-breaking December severe weather hasn't let up, with the first December tornado ever reported in Minnesota occurring last night as a strong storm system roared through the central U.S. on Wednesday 12/15/21)

(Update 12/17/21:  A class-action lawsuit has been filed on behalf of candle factory workers in Mayfield alleging they were told they would be fired - see discussion earlier - if they left work ahead of last Friday evening's deadly long-track tornado in western Kentucky - see here.)

(Update 12/17/21:  As of this morning, the tornado death toll in five states from the December 10-11, 2021 tornadoes is at least 88 dead.  Western Kentucky is in particularly bad shape, and it will take some towns and citizens years to recover.  You can help by donating to the Team Western Kentucky Tornado Relief Fund established directly to help the tornado victims there.)

Casino Games | Dr.D.M.C.
The best part about casino games is that all 창원 출장안마 the options in the casino have 의정부 출장마사지 been given away, so that you 제주도 출장샵 can play with cash 통영 출장안마 prizes or prizes. All of these are 제천 출장마사지 casino

"Lockout In Phoenix AZ | (480) 374-3158
Who can expect to be locked out from his home at night or during emergency needs of his car and office? No one! But with AZ LOCKSMITH PHOENIX, we are 24/7 available with highly advanced tools and locksmith machines to unlock any lock quickly and safely. Don't have any spares if you lost your home's key or forgot it inside it! Don't panic. Because we are available for you anytime, to come with the best and most advanced tools to return you inside fast, offering all lockout services. So, call us whenever you have been locked out of your home, office, or car."

"Rekeying Phoenix AZ | (480) 374-3158
Do not worry if you feel that your lock can not protect you or have any key is-sues. With AZ LOCKSMITH PHOENIX, rekey service can be enough to upgrade the security levels of your lock and bring back the security and safe feeling to your place. There are many locks cases that you might face! If the locks are in good condition but need a minor repair, And in other cases, the lock works functionally, but it requires some security options to enhance its ability to protect you. So whatever the lock issue, the rekey is the best option to guarantee your security."

"Key Replacement Phoenix AZ | (480) 374-3158
Have you an only key, and it has been broken or lost? Don't worry, call AZ LOCKSMITH PHOENIX to get you the damaged and lost key replacement service and key duplicating 24 hours a day, as we offer the near you emergency key-made service day and night! Our team is equipped with the latest key cutting machines and the newest key programming hardware to cut any key of any lock, whether for home, business or automotive locksmith key in Phoenix, Texas. We also offer high-security locks, high technological locks, and smart locks on the same day with the highest quality and most affordable price."