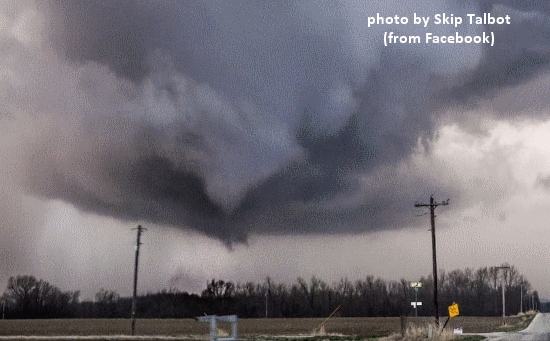 After last week's St. Patrick's Day outbreak in the South on March 17 (more about that farther down), yesterday saw yet another cold-core type setting with tornadoes in west-central Illinois (photo above) and southeast Iowa, on top of last week's cold-core activity (see my last blog post here).

Tomorrow (March 25, 2021) will likely see another tornado outbreak in the southern Mississippi River Valley into parts of Mississippi, Alabama, Tennessee, and Kentucky.  This will probably be similar in scope to the March 17 outbreak with several large long-track tornadoes, so people living in those areas should monitor weather information carefully!

Yesterday's cold-core event was weak (2 EF0 tornadoes), but fairly classic pattern-wise, occurring in the vicinity of a Pacific cold front intersecting a warm front in the northeast Missouri (MO), west-central Illinois (IL), and southeast Iowa (IA) area east of a closed mid-level low.  That was unlike last week's cold-core activity in Kansas, Nebraska, and Missouri (see blog post here) when the tornadoes occurred along occluded sections of a frontal boundary near the mid-level low, instead of the more common Pacific front/warm front intersection area. 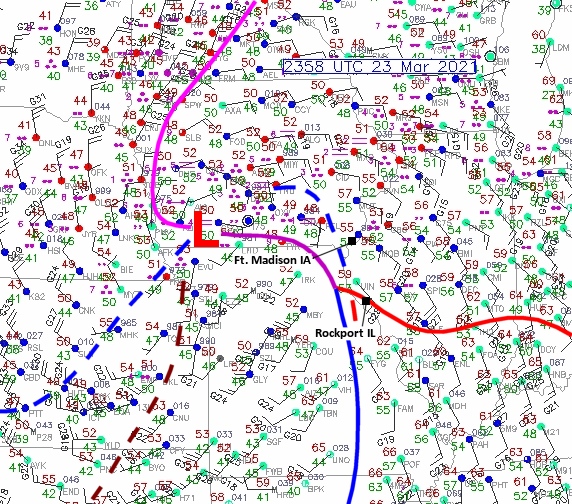 The tornadoes occurred near Rockport, IL (photo at top of this page), and Ft. Madison, IA, marked on the surface map above, close to the Pacific cold fornt / warm front intersection as mentioned earlier, roughly matching the Fig. 16 composite in Davies (2006). 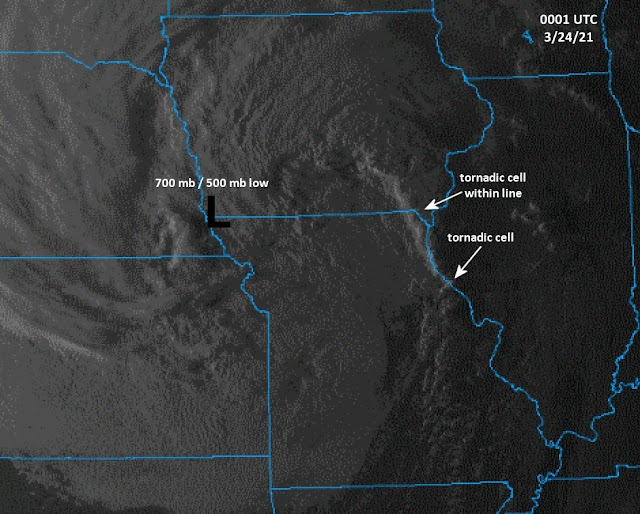 The 12-hr 700 mb forecast from the NAM model morning run on 3/23/21 showed the mid-level low over southwest IA, and a broad area of cold air aloft well below freezing (the blue colors) spreading over the warm sector into western IL: 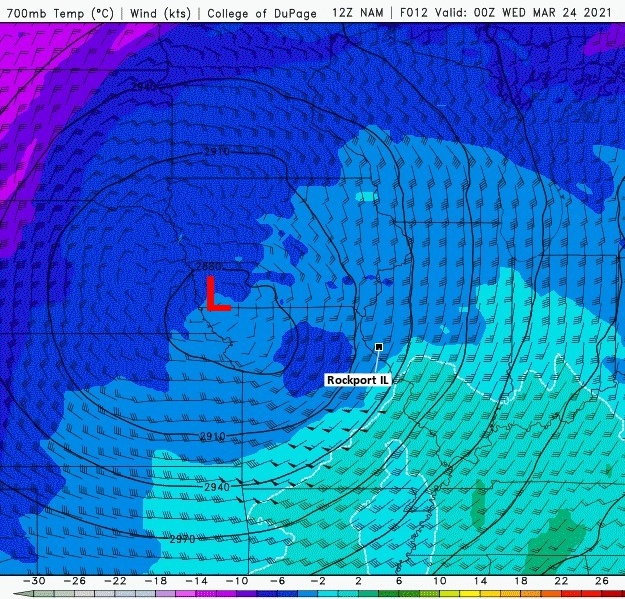 With surface dew points in the mid-50's (deg F) near the warm front, that cold air aloft generated plenty of instability to support storms and some brief tornadoes. 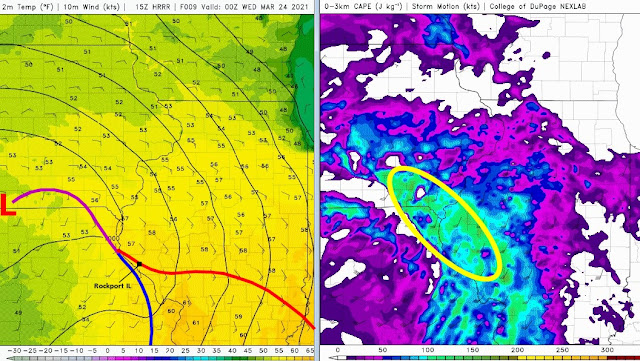 Back on March 10 (2021), there was a cold-core setting that affected south-central Minnesota that was _not_ tornadic, although a photogenic supercell (not shown) occurred near the warm front in that case.  Several people have asked me why that setting did not produce tornadoes, and while I don't have definitive answers, comparing that evening's surface map with yesterday's surface map suggests some clues.

Notice on the 3/10/21 surface map at 2300 UTC (5:00 pm CST, shown below; location of tornado-warned supercell marked by circled "S") that the warm front was "bulging" much farther northward relative to the surface low: 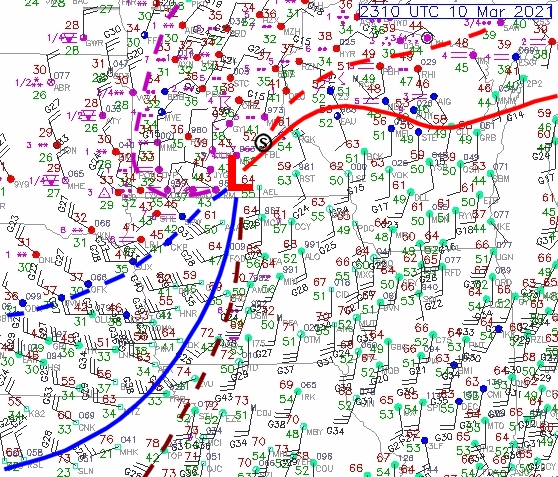 As a result, comparing this map with the surface map earlier from yesterday, there was not much of a "spiraling" wind flow pattern into the surface low.  Instead, winds went from a south or south-southeast direction across southeast Minnesota and most of Wisconsin abruptly to a north or north-northeast direction in the area northeast of the surface low.  This was different than yesterday's surface setting (see the surface map shown earlier) where winds from the warm sector over Illinois and then flowing into the Iowa surface low (ignoring a few "outflow" locations) backed more gradually across the warm front and farther northwestward, going from southerly to southeasterly to easterly.  This more "spiraled" backing wind flow pattern into the surface low may have helped set up a better low-level shear environment for low-level rotation in yesterday's storms near and just north of the warm front.

I'll make one other observation comparing the two surface maps.  In the non-tornadic March 10 case, the temperature contrast across the Minnesota warm front was > 10 deg F in a short distance (say 10-15 miles), which would likely have a detrimental effect on low-levels for tornado potential with the supercell that was crossing the warm front that day.  Yesterday, the temperature contrast across the warm front and for miles north of it was rather gradual, only around 5 deg F between west-central IL and southeast IA, and would not have as abrupt an impact on storms crossing the warm frontal area.

Before I close, I wanted to talk briefly about last week's St. Patrick's Day tornado outbreak in the South.  It was well-forecast days in advance by SPC, announced aggressively in media, and there were  no deaths and only a few injuries in spite of 30+ tornadoes occurring!  The excellent forecasts and media coverage appeared to really contribute to the low injury toll and the lack of deaths.  I truly hope the same will be true with tomorrow's expected outbreak in some of the same area.

Briefly, regarding the 3/17/21 outbreak, here's the morning NAM model forecast at 500 mb valid at mid-afternoon, along with an inset of the NAM 0-1 km energy-helicity index (CAPE and low-level shear combined) for the same time: 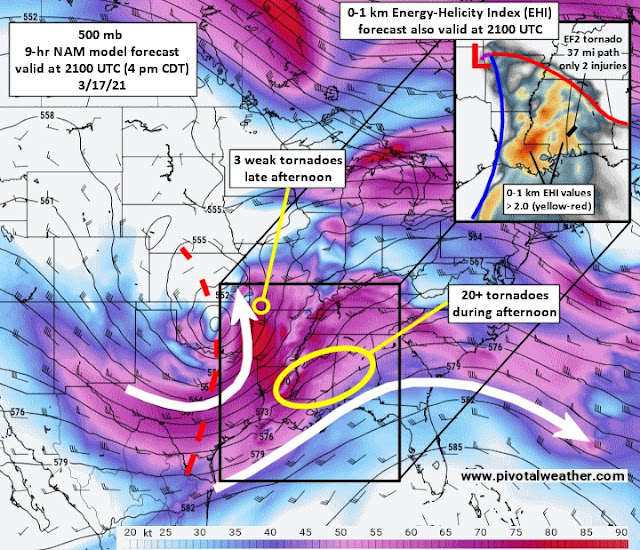 The setting was fairly classic, with a strong trough moving eastward across the southern U.S., and "spreading" jet branches providing forcing for generating storms out ahead of the trough where CAPE/shear combinations were strong and very supportive of tornadoes across the broad warm sector in the Dixie states.

Notice too, that there was yet another "cold-core" setting associated with the same system, this time over southwest MO, where some weak tornadoes occurred.

And getting back to the Dixie states, below are a couple images of a supercell and long-track tornado (note the horizontal vortex on the second image) that moved across southwest Alabama (see tornado track on inset in image above) at mid-afternoon. 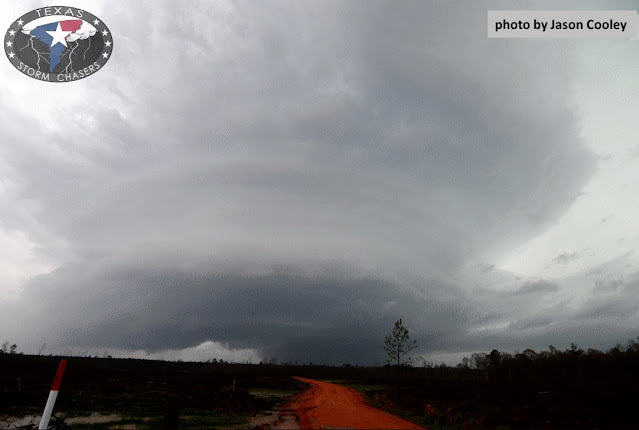 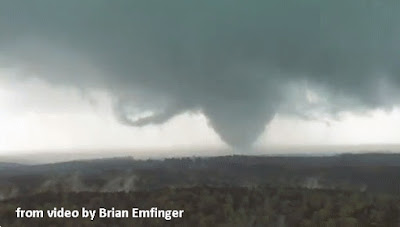 It is a little unusual to be able to see such visible supercell structure in the South.