Why no tornadoes? April 26, 2016 outflow boundary in northeast Kansas 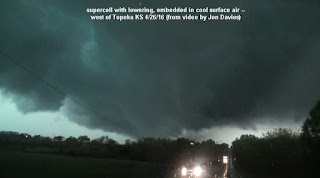 I haven't done a blog post in a long long time.  But several people asked me why last Tuesday (April 26, 2016) wasn't a big tornado day in north & northeast Kansas as had been forecast.  So... it seemed a useful topic to start up posting again.

With our many computer models, it's not hard to see potentially significant systems coming several days in advance, but whether they produce tornadoes or not often has much to do with features such as outflow boundaries and their orientation, which models certainly can't forecast very well. 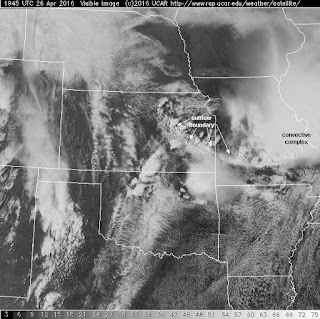 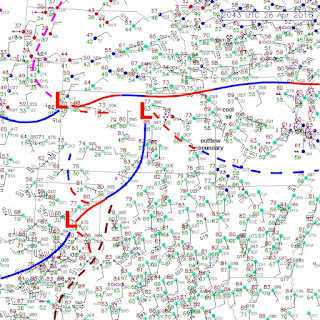 By 20 UTC, storms were forming along this outflow boundary, but because of the south-southwest to north-northeast mid-level flow aloft (see SPC 500 mb chart below), these storms moved immediately into the cooler surface air north of the outflow boundary. 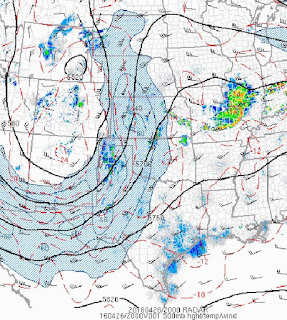 I adjusted the 21 UTC (4 pm CDT) Topeka RAP analysis profile (below), which was forecast too warm at the ground, by substituting the 21 UTC observed TOP temperature (69-70 F). The large green area (convective inhibition) on this profile confirmed the cool near-surface air north of the outflow boundary and the stable low-levels, which work against tornadoes, even though rotating storms (supercells) can still form in the overrunning instability and wind shear above the cool surface air. 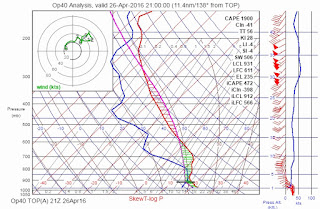 Indeed, several supercells did develop north of the outflow boundary, although none could produce tornadoes in the cool surface air.  The radar panels below show one of these supercells (white arrow) that developed southwest of Topeka and moved north-northeast, prompting a radar-based tornado warning just northwest of Topeka shortly after 22 UTC (5 pm CDT).

The photos below show the cool air clouds north of the stalled outflow boundary, and the non-tornadic supercell as it passed west and northwest of Topeka within the cool surface air. 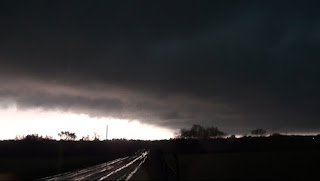 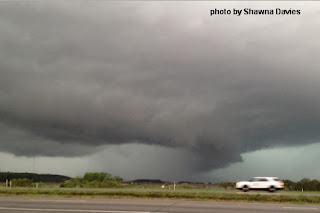 A somewhat similar situation (not shown) involving outflow and a stationary front over northeast Texas three days later on April 29 did generate a significant tornado at Lindale Texas, northwest of Tyler.  In that case, mid-level flow aloft was more west to east so that supercell storm motion was mostly parallel to the boundary, instead of perpendicular and up into the cool air, as in the Topeka April 26 case.

Outflow boundaries can help produce tornadoes, or they can hinder tornado production... it all depends on their orientation and strength relative to how storms move near them.

Jon, what about the "S shaped" hodographs (veer back) playing a role? The storms we were on father west had very "sting bean" elongated shapes visually and on radar- there is currently a discussion over on CFDG regarding this.

The S-shaped wind profiles/hodographs farther west (they weren't S-shaped over northeast KS and the Topeka area) might have had something to do with the lack of tornadoes over n-c KS on 4/26/16. However, there were several funnel reports over that area, and a brief tornado photographed northeast of Smith Center KS around 00 UTC.

I still think the biggest problem was a lack of low-level shear in the warm sector over KS and OK during the day, with the most favorable low-level shear for tornadoes being confined to the more stable surface air north of the KS outflow boundary. The orientation of the storm motion relative to the boundary (perpendicular to it) also didn't help.

As evening and nighttime came on, the diurnal low-level jet kicked in and upped the low-level shear and helicity values in the warm sector over eastern KS and OK, but by then the strong dynamics of the upper system had generated a squall line scenario with QLCS segments and embedded supercells. That resulted in the late EF0-EF1 tornadoes reported over eastern OK/nw AR/sw MO.