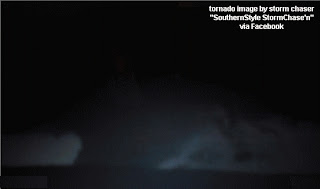 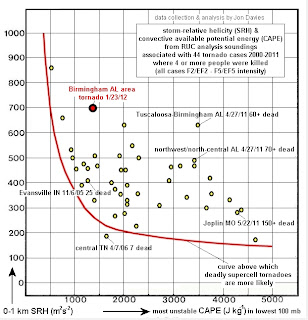 A large deadly tornado (at least EF3 intensity) struck the Birmingham AL area early this morning around 4 a.m. CST (1000 UTC, Monday 1/23/12), killing at least 2 people according to media information at early afternoon.
The weather environment was primed for generating significant tornadoes before sunrise on Monday in Alabama. A RUC analysis sounding at 1000 UTC (see above) at Birmingham while the tornado was moving through showed a massively large wind profile (hodograph) with nearly semi-circular curvature, ideal for generating low-level rotation in storms when notable instability is also present. In this case, there was around 700 m2/s2 of storm-relative helicity, with mixed-layer CAPE between 1000 and 1500 J/kg, putting the storm environment in a statistically dangerous area on an SRH-CAPE diagram (see red dot on scatterdiagram above) regarding support for strong or violent tornadoes. Compared to last Saturday's environment with severe storms in central Georgia (1/21/12, not shown) where representative SRH values were around 300 m2/s2 and CAPE was only 300-400 J/kg, this was a much more dangerous and life-threatening setting.
The overnight SPC mesoanalysis also suggested potential for significant tornadoes (see the 0900 UTC SPC graphics above), with large SRH-CAPE combinations indicated in the same area where storms were moving through. A strong negatively-tilted trough at 500 mb (roughly 18,000 ft MSL, see last chart above) prompted the deadly severe weather, pulling deep moisture into Alabama from the Gulf of Mexico, generating strong low and mid-level wind fields, and providing strong lift and forcing.
Given that it was still dark when the Birmingham area tornado moved through, the death toll could have been much larger. It surely helped that the storm potential was well-outlooked by SPC already on Sunday, and NWS warnings in the area were timely.
Jon Davies - 1/23/12
Posted by Jon Davies at 12:01 PM

Thank you for the info. It sounds pretty user friendly. I guess I’ll pick one up for fun. thank u

Flats for Sale in Birmingham