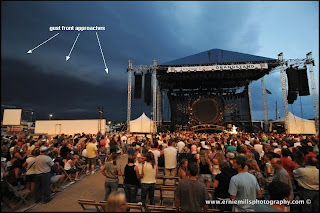 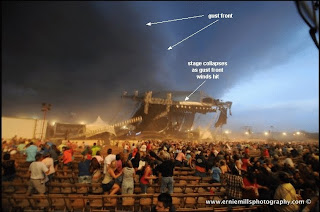 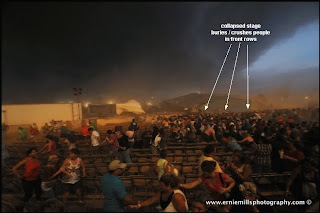 Saturday evening's stage collapse due to strong gust front winds at the Indiana State Fairgrounds in Indianapolis killed 5 people and finished off a week when several people were killed in the U.S. as a result of thunderstorm winds. On Aug. 7, 1 person was killed in southern Missouri when a tree blew onto their car; on Aug. 9, a UPS driver was killed in northeast Indiana when a tree fell on his truck, and on Aug. 10, a woman was killed east of Tulsa OK when thunderstorm winds destroyed a mobile home (this may have been a brief non-supercell tornado from a bow echo on radar). This all serves as a reminder that severe thunderstorm/squall line winds can and do kill people.

Concerning Saturday's Indiana State Fair tragedy, here's what my wife Shawna posted on Facebook:
"The Indiana Governor called last night's stage collapse a "freak accident". I respectfully disagree. That was a make shift stage sitting right in the path of that gust front. It doesn't take a genius to know it was disaster in the making (especially when you see Ernie Mill's photos of the shelf cloud as it approached). The concert should have at least been delayed once the warning was issued (10 minutes out) with an orderly evacuation AWAY from that stage. Very sad and preventable incident. It's also another reminder that we in the weather community need to continue to educate the public about weather awareness."

I agree... At 8:39 pm EDT, NWS had issued a warning for Indianapolis concerning thunderstorm winds in excess of 60 mph a full 10 minutes before the storm struck the fairgrounds at around 8:50 pm EDT, and severe thunderstorms had been in the area west of Indianapolis approaching for more than an hour before (see radar images above). A shelf cloud (a visual "red flag" to watch for strong wind gusts, see Ernie Mill's photos above) was quite visible as the thunderstorm gust front approached the fairgrounds. A full evacuation wasn't practical or even necessary, but certainly it should have been clear that the _temporary_ stage structure with its top-heavy lights was a dangerous place to be around in strong winds. The deaths all occurred in the first several rows as the stage structure collapsed. Someone at a microphone should have emphatically told concertgoers seated within a couple hundred feet of the stage to at least move back well away from the stage structure _before_ the gust front hit; that much would not have been difficult to do. From this perspective, Saturday's tragedy was preventable and certainly not a "freak accident" or "fluke".

At all public outdoor venues that involve thousands of people, the organizers/managers of the event on-site need to be in consistent touch with a meteorologist or weather-knowledgeable person regarding any potential severe weather that may be approaching, even if it is many miles away yet. And a _clear_ communication line needs to be open to those on stage or in control of the public sound system at the event to let people know where to go in a timely manner before weather hits. While full evacuations may not be practical or possible, people definitely need to be warned and told to move away from dangerous _temporary_ structures that may collapse when gusty thunderstorm winds hit them. That seems like a no-brainer.

I would object to one phrase in your otherwise excellent write up: the stage was not "make shift". It was designed and built by a reputable company, and owned and installed by a well-known Indiana entertainment technology provider who had apparently provided the same or a similar stage to the state fair for several years. (I have links to the providers on my blog writeup at http://www.controlgeek.net/blog/2011/8/14/indiana-state-fair-stage-collapse.html)

I have worked on many large outdoor shows, and while I wasn't at this one, it's certainly conceivable that the stage was installed improperly or was faulty. We wont know about that until the investigation is complete, but the larger issue is that every outdoor stage has a maximum wind load rating (I have some ratings from other manufacturers linked in this entry on the Cheap Trick collapse http://www.controlgeek.net/blog/2011/7/18/ottawa-bluesfest-stage-roof-collapses.html). So this tragedy seems likely to me to be an operational failure, and I totally concur with the rest of your recommendations about getting the audience away from the structure. (And it came to light today that another (smaller) outdoor venue nearby postponed their show based on the same storm threat, and sent the audience back to their cars to ride out the storm.)

Also, it does seem that while an open line was held in the sound system to the audience, confusing and/or conflicting announcements were made, which led to the audience being unclear as to whether or not to evacuate.

I've heard you speak at Chasercon several times and always learn a lot from your talks and your blog, keep up the great work!

Thanks for filling me in on some additional information.

My wife in her quote shouldn't have used the word "make-shift"... it should have been "temporary". Possibly there were issues with the way the stage was assembled, and that's where some of the blame may lie. Thanks for pointing that out.

It does seem a bit much to expect that any tall assembled stage structure with heavy lights on the top rigging should withstand 50+ mph wind gusts.

With other stage collapses due to winds at outdoor concerts in Ottawa, Canada and Tulsa OK in the last month, maybe someone should look at the structural ratings and practicality of temporary/ assembled outdoor stages in windy weather. And certainly venue managers should be more prepared for severe weather and the safety of their attendees, given these recent incidents.

I saw where the outdoor Indianapolis Symphony concert a few miles away from the fairgrounds last Saturday was handled differently, with the concert being cancelled and 6000+ people told to go to their cars.

Thanks again for your comments and thoughts, John.

Yeah this was a horrible event. I was out chasing the far southern end of the line, and was happy about a decent chase until I heard about the State Fair Incident. I did see several gustnadoes along the leading edge of the gust front:

confusing and/or conflicting announcements when i here or read these words i get pist there was nothing confusing about what was said. we were told there was rain on the way and the conert might be postponed but they were hoping it would miss us but if it didn't they had a plan intack we were to move torwards the exits in a calm orderly maner and there would be fair personal to direct us to the 3 buildings for shelter there was nothing said about sever weather or even thunderstorm

"It does seem a bit much to expect that any tall assembled stage structure with heavy lights on the top rigging should withstand 50+ mph wind gusts."

It's all about how much you want to spend :-) And, depending on the design, the weight of lights, speakers, video screens, etc, can actually be used to help make the structure stronger. But it gets very complicated and you need an engineer, and we have that engineering knowledge already in the industry.

"With other stage collapses . . . maybe someone should look at the structural ratings and practicality of temporary/ assembled outdoor stages in windy weather."

Actually, that work has already been done by PLASA, the Professional Lighting and Sound Association. The standard even explicitly talks about what to me is the key issue--that a plan must be created to deal with the structure during severe weather.

I have a link to the standard on my blog, and PLASA technical standards manager Karl Ruling was on NPR yesterday in a pretty good report. http://www.npr.org/blogs/therecord/2011/08/17/139721112/who-is-inspecting-outdoor-stages

The problem is that, while this is a five year old official ANSI standard, it's not law. To be law, it has to be adopted by the "Authority Having Jurisdiction", and apparently, in this case, that would be the state of Indiana.

As a retired NWS met, I totally agree with your article and point of view. You have this line of storms coming in for hours all the way from central IL, with a string of high wind reports upstream, yet no announcement is made to clear the area. You have a black line of clouds approaching, with a warning out, and yet people are still in their chairs. This is not rocket science here. A fifth grader could figure out a black line of approaching clouds is not good. And with all the mobile devices to download for free all the NWS upstream reports/warnings/statements/etc, no excuse any fair official did not know the latest information. Any phone call 30 minutes earlier in a dynamic severe storm situation is ancient history, and totally immaterial to not knowing about recent warnings. Lets face it, its seems they were more interested in putting on the show, than public safety.