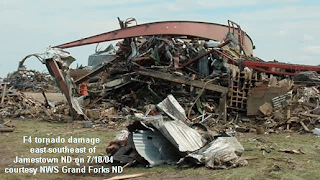 FWIW, a "Reply" paper (in full PDF form here) I wrote in response to comments by Roger Edwards and Rich Thompson was published in the latest issue of Weather & Forecasting journal (Aug 2009). The case study concerns a violent tornado (see photos above) in North Dakota on July 18, 2004, with the original paper published here in 2007.

The discussion focuses on mixed-layer LCL heights that appeared "relatively high" for a violent tornado, near 1500 m AGL, compared to means and medians that were 900-1000 m AGL from a database of RUC soundings 2001-2008 that I put together associated with violent tornadoes (F4-F5 or EF4-EF5). What's "relatively high" and what isn't is pretty subjective, but the North Dakota case did fall at the far upper end of MLLCL height distributions I've seen for violent tornadoes, and I felt the case was worth documenting. Forecast-wise, given CAPE-shear combinations that appear supportive of supercell tornadoes over a fairly large area, it's sometimes easy to get focused on areas where the MLLCL heights are lower, say less than 1000-1200 m. The North Dakota case examined and others, such as 7/11/08 in west central Minnesota, are a reminder to keep and eye on areas farther west and southwest where MLLCL heights on the SPC mesoanalysis (see graphic above) appear to push values at the upper end of published tornadic database distributions (e.g., near 1600-1800 m AGL).

Researcher Dr. Paul Markowski recently suggested to me by e-mail that such MLLCL heights aren't really that "high", which may be true. Certainly, when MLLCL heights get up above 2000 m AGL, that appears prohibitive for strong or violent tornadoes due to subcloud mixing and the potential for evaporative cooling and cold pooling in low levels. Going back to Dr. Markowski's 2002 paper (here) about rear-flank downdraft observations, he suggests that, statistically, the spread between surface temperature and dewpoint may be a more reliable limiting factor than LCL height when assessing potential for supercell tornadoes. This is because we have denser and more reliable surface observations, while model-based mixed-layer parcel lifted computations (e.g., from the RUC, which includes "ML" products from the SPC mesoanalysis) are highly affected by model forecast moisture depth and accuracy issues.

Although not in the August 2009 paper, observed surface temperature and dew point spreads from my 2001-2008 tornado environment database suggest that spreads of 5-15 degrees F appear most optimum for strong or violent tornadoes, which agrees with Dr. Markowski's observational field work from VORTEX1. When those spreads get near 20 degrees F and higher, that's when support for stronger supercell tornadoes seems to really break down. But please don't use that as a hard and fast "threshold", because nature doesn't recognize "thresholds"! FYI, the North Dakota violent tornado case in my "Reply" paper had temperature to dew point spreads that were around 18 degrees F.