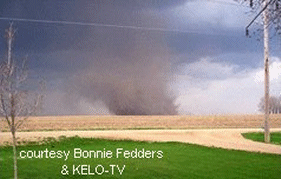 Hey Jon,
Thanks for putting this up. I was very interested in the writeup on Windsor. While everyone seemed to be in Kansas already chasing, I was at work at a local flash flood prediction program. What an amazing day to sit and watch the level3 high-res. I'm still kicking myself for not saving any of the imagery.

Hey Jon,
Good stuff here. Always love a good case study. Just thought I would drop a note about the May 1st storms. In one of your radar grabs you have the storm southwest of Sioux Falls labelled as non-tornadic. I was chasing that storm and I had reported a brief tornado with this storm that was included in their warning text, however it never ended up in LSR's or storm reports. Not that it really affects any of the research here, but just thought it would be interesting to note. Thanks again for putting these together!

Thanks, Dann for the comments about the Windsor tornado write-up... a very unusual and difficult-to-forecast event for Colorado.

Beau, I didn't know that the southeast SD cell on 1 May '08 produced a brief tornado. That cell appeared to be over consistently cooler surface air than the northwest Iowa cells near the boundary intersection, which probably limited it's tornado production. Thanks for the info!