EF4 tornado in Minnesota on July 8, 2020 - a rather subtle environment for a violent tornado 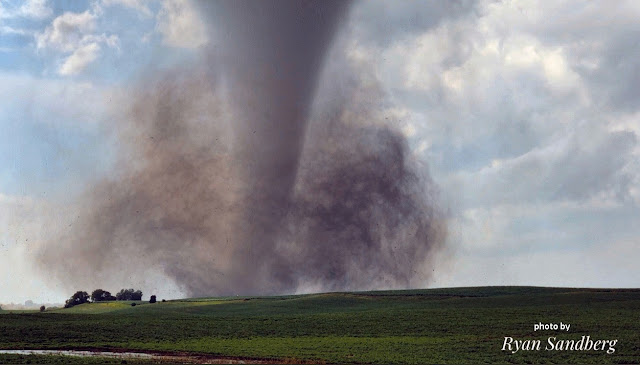 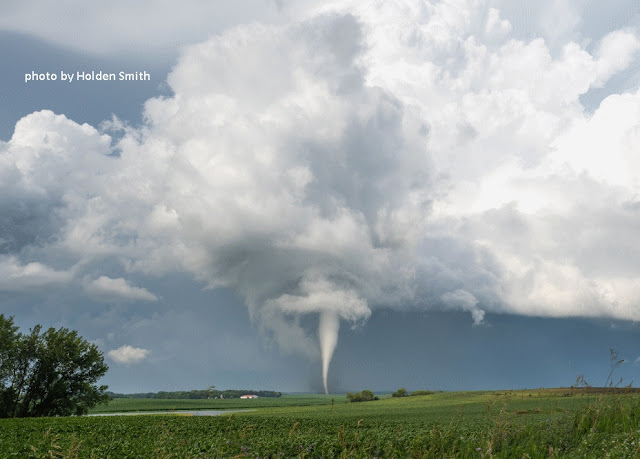 After four EF4 tornadoes in April (3 in Mississippi, 1 in South Carolina), there were none in the U.S. in May and June.  But on July 8 in west-central Minnesota (MN), an EF4 tornado (images above) near Dalton, MN shortly after 5:00 pm CDT (2200 UTC) killed one person.  This was the first violent tornado in July in the U.S. since 2004!

The environment at first glance did not appear likely to generate a violent tornado, as low-level wind shear (storm-relative helicity, or SRH) wasn't notably large.  But there was a boundary in the area and large instability (CAPE), along with enough deep-layer wind shear to support tornadic supercells.  Here's a look at the setting... 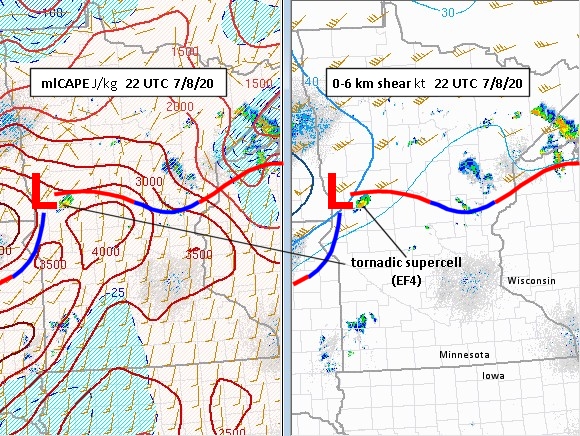 Deep-layer shear (2nd panel above) was enough (30-40 kt) to help organize the isolated cell into a supercell.  Just as important, the cell developed near an east-west boundary (warm front /stationary front, also shown on the graphics above) that extended eastward from a surface low, a favorable setting for tornadoes when the surrounding environment offers additional support. 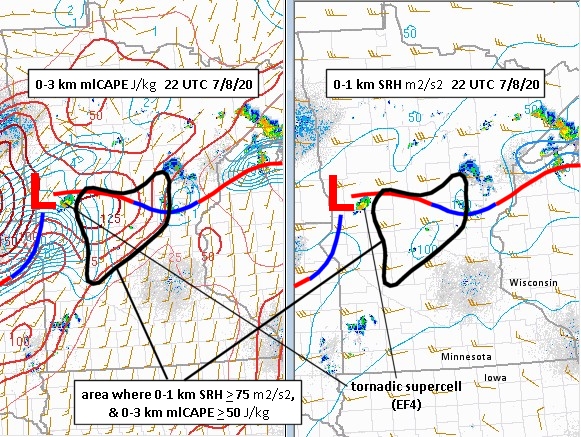 But together, the combination of just enough low-level shear/SRH with strong low-level and total CAPE in the vicinity of the east-west boundary east of the surface low was more favorable for tornado potential than a look at wind shear parameters alone might suggest.

In fact, supercell and tornado development was rather fast and 'explosive', as seen in the two satellite images below: 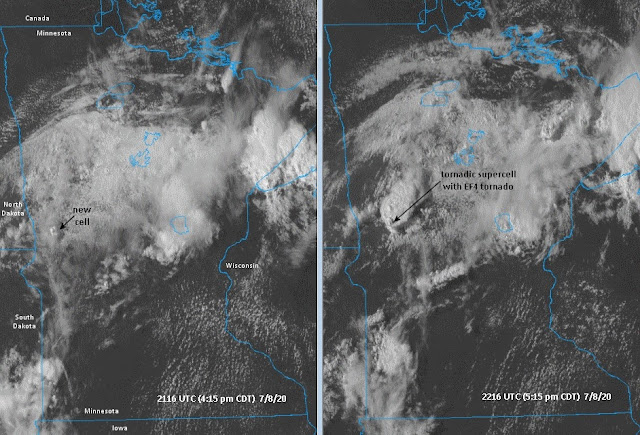 In just less than an hour from initiation, the storm became a supercell and planted a strong/violent tornado on the ground.  That's quite fast compared to many supercells that take two hours or more to produce tornadoes.

A contributing factor to this rapid development may have been low-level lapse rates (below), not shown in the SPC graphics above: 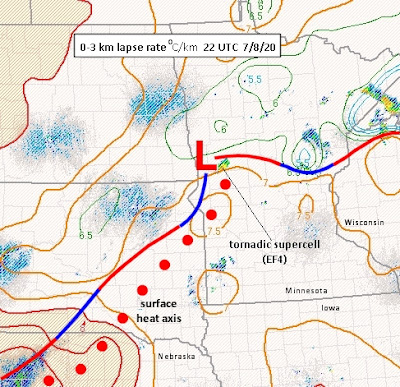 The axis of red dots in the graphic above shows strong surface heating extending from the southwest into the supercell's environment near the boundary over west-central MN.  Such steep lapse rates (> 7.0 degrees C per km, a rapid change in temperature above ground) can enhance the stretching of low-level air entering storm updrafts, adding a 'kick' to an already unstable situation and helping to make the most of available low-level wind shear (SRH) as it tilts and stretches into an updraft.

Back around 2005, I came up with a parameter called 'enhanced stretching potential' (ESP) that combined low-level lapse rates with low-level CAPE to help locate areas that might have this extra 'kick'.  It was designed mainly for diagnosing short-term potential for landspout tornadoes along sharp boundaries (see this paper).  But on 7/8/20, ESP overlapped the area we discussed above that already had potential for tornadoes suggested by more typical supercell tornado parameters: 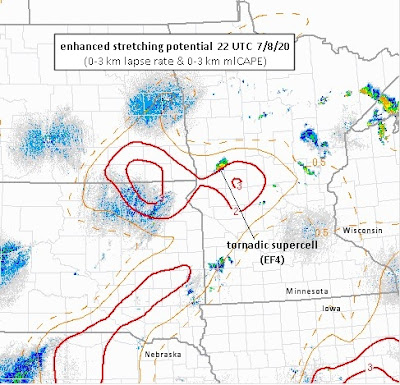 It may have added some 'gasoline' to the fire in this case, speeding up supercell and tornado development.  But that's only speculative.  I will mention that the prolific tornadic supercell in southern Saskatchewan (Canada) on July 4 that I touched on in my previous post had some of the same ingredients (SRH < 100 m2/s2, large CAPE and large ESP, as well as an east-west boundary; not shown).

As ESP was originally intended for highlighting short-term possibility for landspouts, it is worth noting on 7/8/20 that the ESP graphic above showed an ESP maximum over north-central Nebraska, where landspouts did occur later that evening along a boundary southwest of a storm near Thedford, Nebraska: 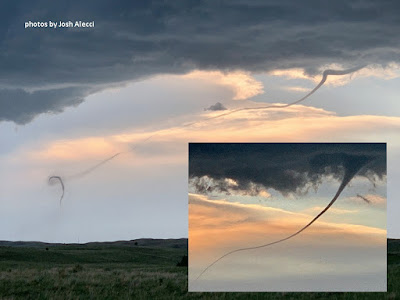 And other landspouts occurred on 7/8/20 along a boundary and boundary intersection over northeast Colorado where ESP was also large (not shown). 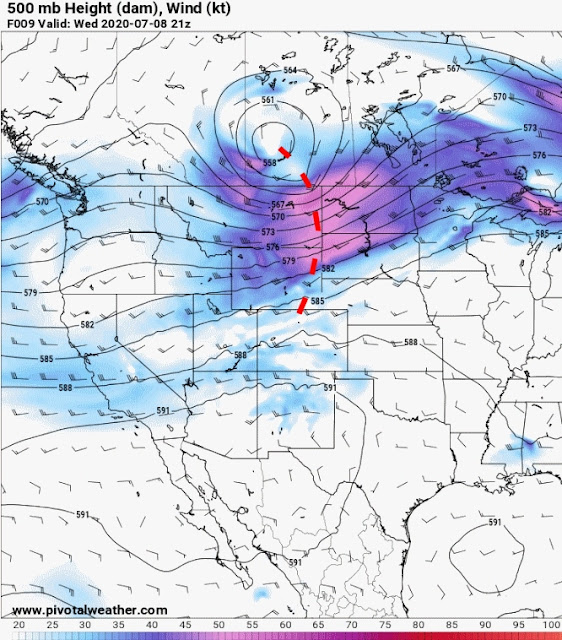 It is interesing that the early half of July 2020 has been more active for tornadoes in the central and northern Plains of the U.S. than in the last half of June.