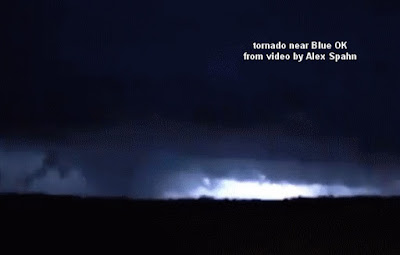 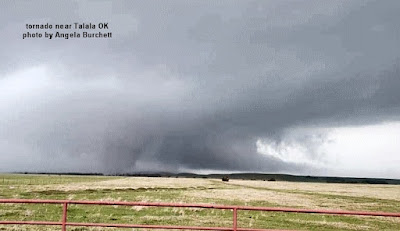 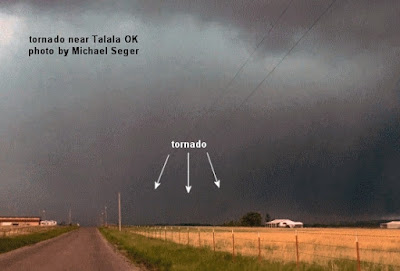 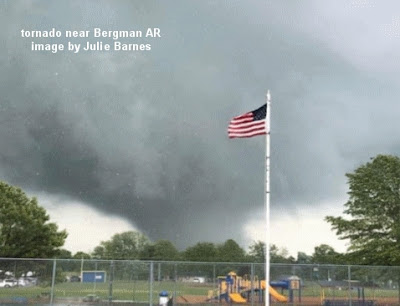 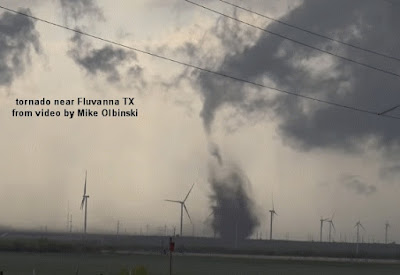 Tuesday's tornado outbreak on April 30 in Oklahoma (OK), Missouri (MO), Arkansas (AR) and Texas (TX) saw many tornadoes that were widely-photographed, and unfortunately, one death from a large tornado after dark in southeast OK (see 1st image above).

For so many tornadoes (some large, some rain-wrapped), it is surprising that there were only a few injuries and just the one death (two other deaths occurred due to flash flooding in OK and MO).  That may speak to the effectiveness of warnings on April 30, and the fact that no large towns were hit directly.

The 2nd and 3rd images above show a large and dangerous EF2 tornado at mid-afternoon north of Tulsa, OK that was difficult to see at times due to rain wrapping; it is fortunate that this tornado did not strike any towns.  The 4th image above is a large EF1 tornado in northwest AR near Bergman.  And the last image above is a "landspout-type" tornado that developed in west Texas northwest of Snyder with a supercell over an east-west stationary boundary.

The outbreak was generated by a strong shortwave trough of energy at 500 mb (roughly 18,000 ft MSL) moving out of a large western trough and into the Plains (see thick red dashed line on NAM forecast for midday below).  Midlevel winds spread out widely ahead of this shortwave, inducing large-scale ascent over the area where tornadoes occurred on April 30: 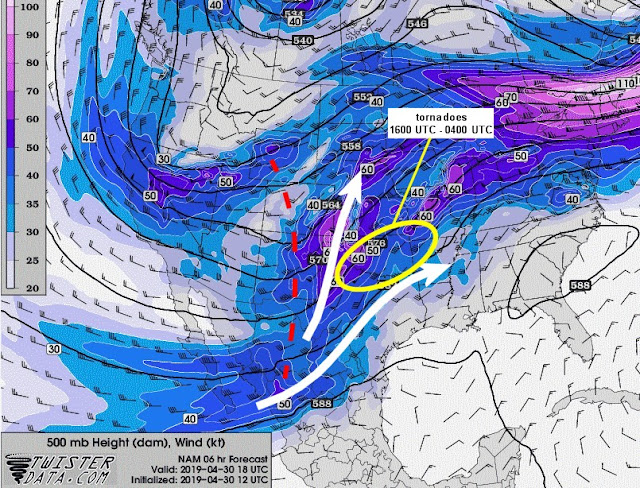 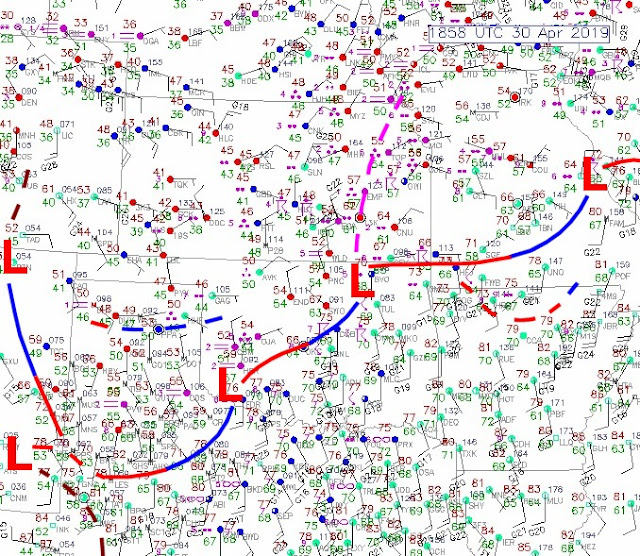 In particular, cool air and easterly winds from overnight and morning storms over eastern KS and western MO had reinforced the front over northeast OK just ahead of the surface low there.  This increased low-level wind shear in that area, reflected by increased values of the effective-layer significant tornado parameter (STP) on the SPC mesoanalysis at 2:00 pm over northeast OK into southwest MO: 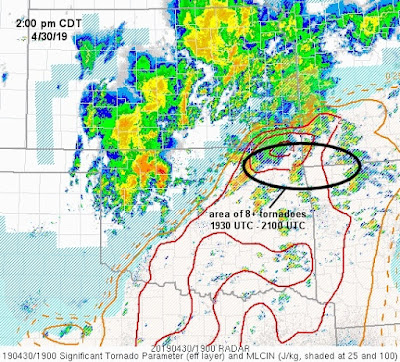 That's the area where the most tornadoes occurred during the afternoon, seen on the visible satellite image below from 3:00 pm CDT (2000 UTC), with some tornadic storms labelled: 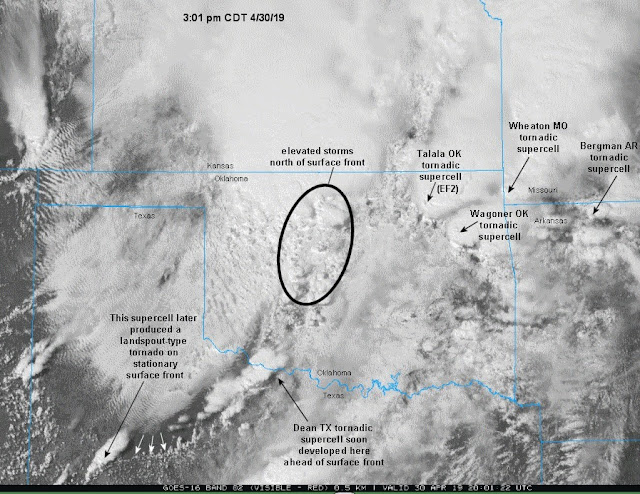 Other storms in northwest TX near Wichita Falls, and west TX near Snyder, produced tornadoes after 4:00 pm CDT (2100 UTC) as noted on the above satellite photo.  (The last tornado image at the top of this post, northwest of Snyder TX, may have involved some landspout-type processes with strong heating along the stationary boundary and near the storm there, labelled on the satellite image.)

Moving into evening on April 30, the 8:00 pm CDT (0100 UTC) surface map and composite radar image below showed storms "lining out" across OK along the front, with some outflow boundaries hinted at over northern TX and southern OK, and also southwest MO and northwest AR: 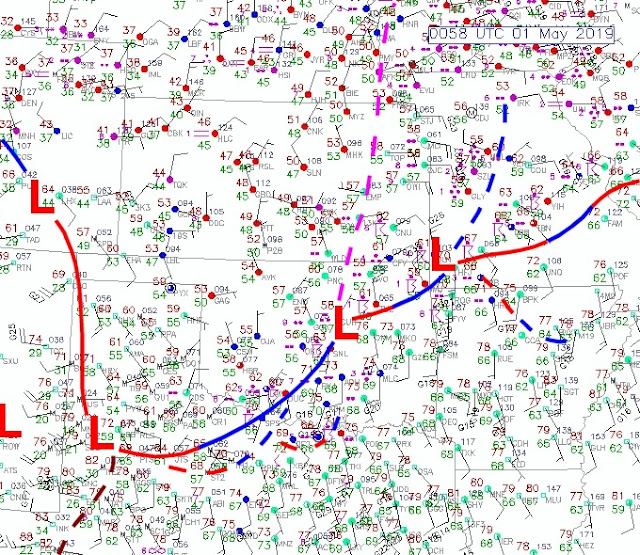 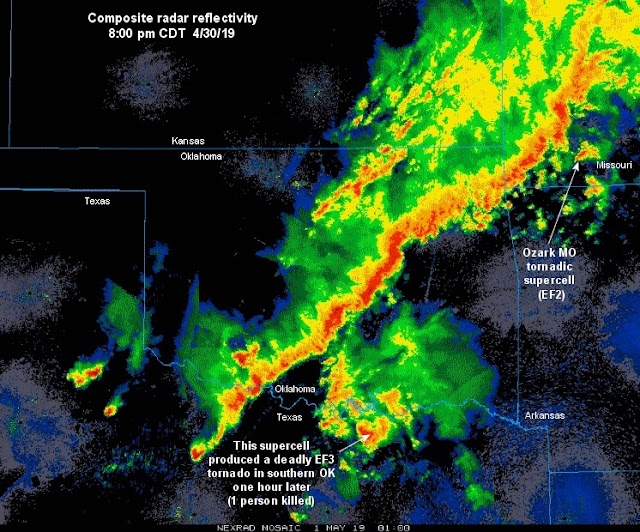 It's possible these subtle outflow boundaries may have helped with tornado production with storms ahead of the line in the warm sector over southern OK around 9:00 pm CDT where the large EF3 tornado killed a woman between Bokchito and Blue, and also the EF2 tornado south of Springfield MO around 8:00 pm CDT where 3 people where injured.

Also notice how the effective-layer STP from the SPC mesoanalysis highlighted southern OK and southwest MO at 8:00 pm CDT, largely due to an increasing low-level jet (southerly winds at about 5000 ft MSL, not shown) within the warm sector around sunset: 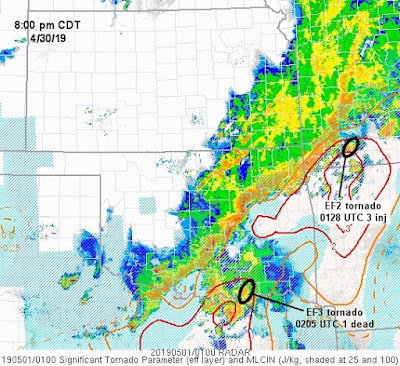 This outbreak had a little of everything regarding tornadoes.  It involved tornadoes occurring well inside the open warm sector (the infamous drone-viewed tornado near Sulphur OK around noon), tornadoes near convectively-enhanced and shear-enhanced boundaries (the afternoon tornadoes in northeast OK, southwest MO, and northwest AR), the deadly evening tornado in southeast OK within the warm sector (possibly helped by a subtle outflow boundary), and the aforementioned afternoon tornado in west TX that may have involved landspout processes.